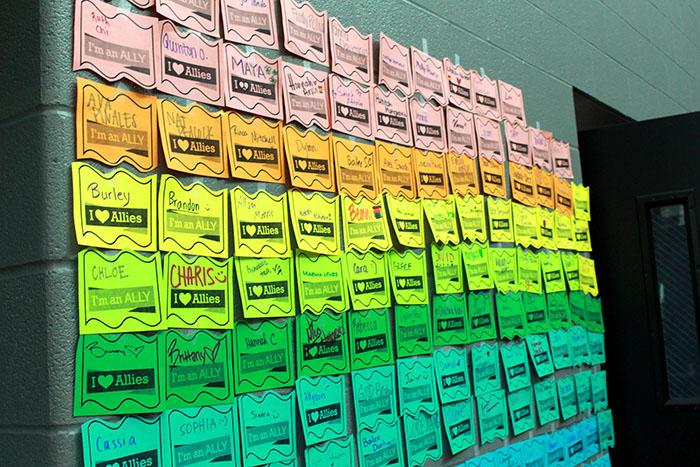 The East Gay Straight Alliance participated in Ally Week Sept. 26-30 by allowing students to sign pledges to show their support for the LGBT community.

Stickers of all shapes, sizes and colors have taken over Lakota East, joining the display of signed pledges on the wall next to the cafeteria doors. This rainbow paper trail represents the 199 East students that have publicly declared their support for the lesbian, gay, bisexual and transgender (LGBT) community.

The Gay, Lesbian and Straight Education Network (GLSEN) orchestrated an event known as Ally Week from Sept. 26-30 as an effort to promote being an ally for the LGBT community. The East chapter of the Gay-Straight Alliance (GSA) participated in this national event in order to raise awareness and educate East students about issues such as bullying or increased risk of suicide that LGBT students everywhere face.

Students had the to chance to sign a pledge with either “I (heart) Allies” or “I’m an Ally!”  in any color of the rainbow during their respective lunch periods. The pledges were then displayed on the wall between the cafeteria doors. 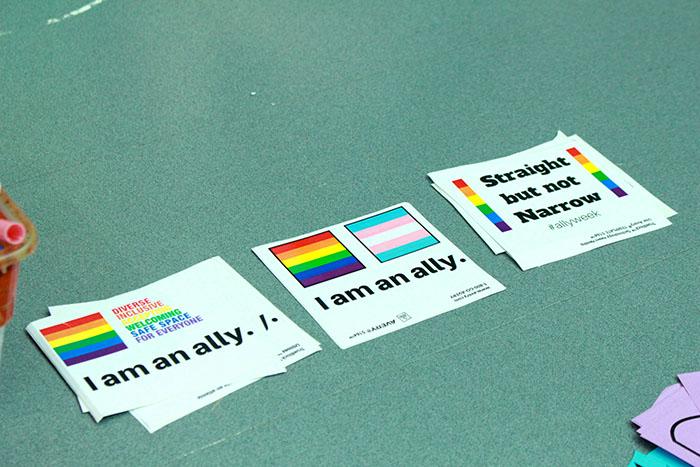 East students could take stickers provided by GSA to show their support for the LGBT community.

According to East senior and GSA leadership member Melanie Cain, the response was more than satisfactory.

“We reached 199 pledges by the end of the week, and we didn’t do signings on Monday,” Cain said. “So that’s a huge response that really tells our LGBT classmates that we have people here who care and that we are not alone.”

Signing a pledge may seem like a small thing, but to GSA members like East senior Kai Choi, signing a pledge is just the first step to making a big difference for both the students at East and LGBT students in the United States.

“The large amount of pledges makes me feel fairly comfortable with talking about what life is like for a young LGBTQA+ [Lesbian, Gay, Bisexual, Transgender, Queer, Agender Plus] person such as myself,” Choi said. “Ally Week to me means that people show support toward other people’s relationships.” 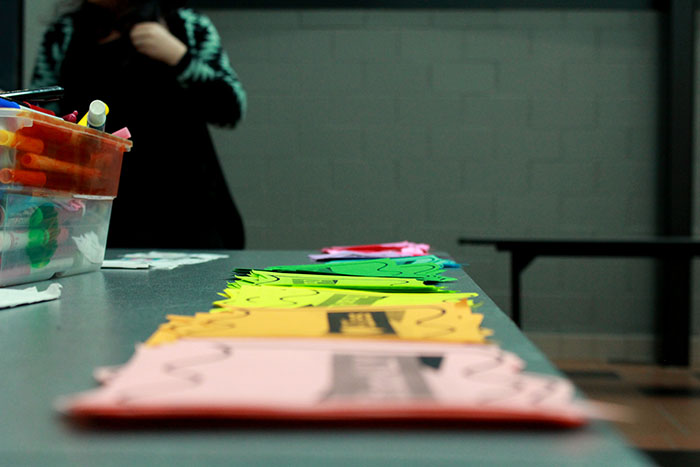 Students could choose from different colors to sign their name on the pledge which were hung outside the cafeteria.

According to Cain, being an ally means being willing to have a discussion about LGBT issues and standing up for LGBT classmates if they are being harassed.  A 2015 study conducted by GLSEN concerning LGBT teenagers revealed that 90 percent of them have reported being harassed, a third of which by faculty members. A further 28 percent of the teenagers surveyed dropped out of school due to anti-LGBT sentiments. Ally Week functions as a way to show the more positive side of the student body: the side that supports the GSA by gladly becoming an ally.

One such student is East senior Sydni-Dee Venter, who isn’t LGBT but still wants to show her acceptance and support of everyone in the LGBT community.

“I want to help make them feel more comfortable in the world we live in,” Venter said.

Students that are both part of the GSA and members of the LGBT community like East junior Chloe Arnwine not only appreciate the support, but also use it as a way to determine what the student body’s reaction to other LGBT students will be.

“It proves a point to me that students here are supportive of who we are and what we’re doing,” Arwin said. “That they simply want people to know that they stand with us and support us. When you’re in that situation it’s comforting to know that there are many other students who share the opinion and feelings you have and that they’re willing to share it.”

However, members of the GSA also understood why signing a pledge was not possible for every student and faculty member.

“We realize that not everyone feels comfortable having their name on the wall and being associated with our issues for various reasons,” Cain said. “[For example,] being in the closet themselves, having an unsupportive family that could be unsafe for them, or just plain not feeling comfortable speaking on our behalf.”

Those who are comfortable with supporting the GSA have found the club to be a valuable resource. East senior Caroline Patterson attended GSA at her old school in Florida, the first instance it returned after a five year hiatus caused by death threats and Bible passages slipped under the door at meetings. When she moved to Ohio last year, the East chapter of GSA replaced the support system that she had lost in the move.

“Ally Week means so much to me because it helps establish the fact that we as a community have support here,” Patterson said. “For even a few people to establish support like that makes me so happy I could cry. To have 200 people pledge their support blows my mind.”

An East students signs one of the pledges which would later be displayed outside the cafeteria.