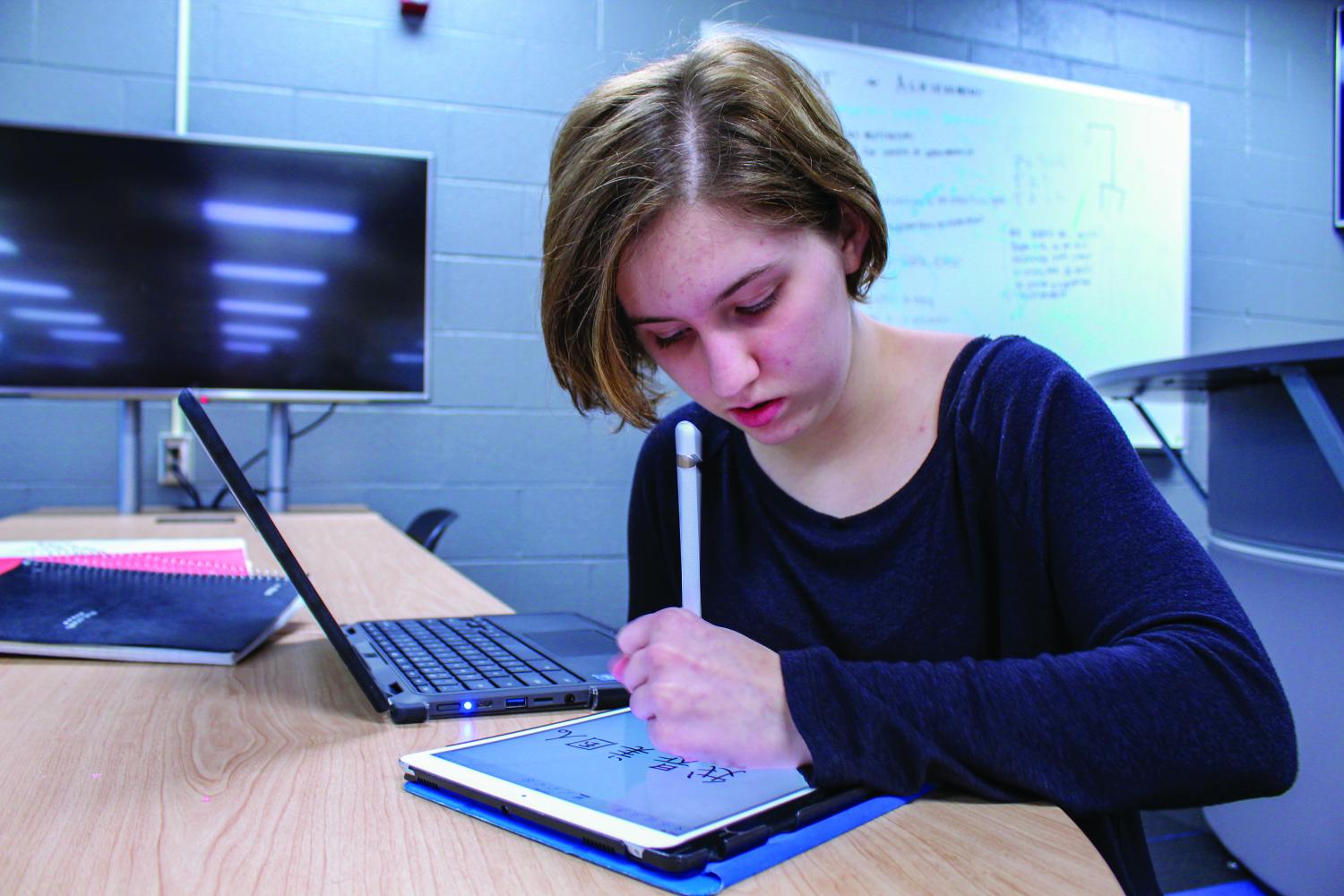 As part of her efforts to immerse herself in cultures around the world, East junior Kaelyn Hopton takes an online class to learn Mandarin Chinese.

East junior Kaelyn Hopton is on her second stop on her lifelong world tour, and life couldn’t be better. At least, that’s what she was thinking when she first started her online Mandarin Chinese class through Brigham Young University (BYU). But a couple of days later, she realized just how hard the language was.

It all started at the end of her freshman year when a friend first “forced her” to listen to Korean music, and though she was hesitant at first, Kaelyn says that she had to reluctantly admit that it was enjoyable.

“I’d just been recently diagnosed with a chronic illness that caused a loss of self, and it completely changed my world,” says Kaelyn, who suffers from Crohn’s disease. “I was pretty depressed. But one of my friends invited me to her birthday and forced me to listen to K-pop, and I had to admit it was interesting. I went home and did some Googling, and fell down the rabbit hole.”

That led her to begin her world tour in Korea, watching Korean variety shows, K-dramas, and listening to their music. But she won’t stay in Korea long, before moving to another culture and immersing herself there.

“Aside from the personal reward I get through growing my own knowledge and learning,” Kaelyn says, “I like immersing myself in different cultures.”

Rather than continuing onto her third year of Latin, she decided to fulfill her honors diploma a different way and take her love of other cultures one step further.

However, the $772 Korean semester classes ended up being more expensive than $263 Mandarin class, so Kaelyn decided on Mandarin. A decision that paid off a semester later, according to Kaelyn’s mother Mary Hopton.

“We were at a Korean restaurant and there was a group next to us speaking Chinese,” Mary says. “I remember that I kept telling her not to eavesdrop, but she was so excited because she could understand what they were saying.”

Kaelyn’s grandmother is an immigrant from Slovenia, speaks six languages and is one of the people Kaelyn looks up to most.

“I’m making it my personal goal, as a bit of friendly family competition, to speak as many, if not more, languages [than my grandmother],” Kaelyn says. “In addition to English, I want to learn Mandarin, Korean, Slovenian, Norwegian, and Czech, and then branch out into other Nordic languages if I can.”

Even though Kaelyn doesn’t plan to linger in China forever, she knows she won’t be able to fully leave Mandarin behind.

“I’ll definitely stick with it, I love it so much,” Kaelyn says. “Slowly I’ll just add in other things. I’ll have Mandarin more on the back burner as I explore others, but I’ll keep going back.”

According to Kaelyn’s father Matt Hopton, he thought she was “a little crazy” to try something so ambitious as to learn, as Kaelyn describes it, an “extremely difficult” language alongside her already heavy course load.

“But she’d been developing a real curiosity about the rest of the world and its cultures,” Matt says. “Kaelyn loves hearing about Europe. Those stories and [her own interests] have made her realize that different people and different cultures, just because they’re different, doesn’t make them better or worse.”

According to Kaelyn, being culturally aware is very important not just for others, but for understanding where others come from and their perspectives.

“I want to give compassion, kindness and to leave a positive impact, not just for one specific culture, but for everybody,” Kaelyn says. “I’m fully immersive when I study a culture, putting myself there to the maximum of my ability, so I can let that culture change me for the better. That way I can change others.”