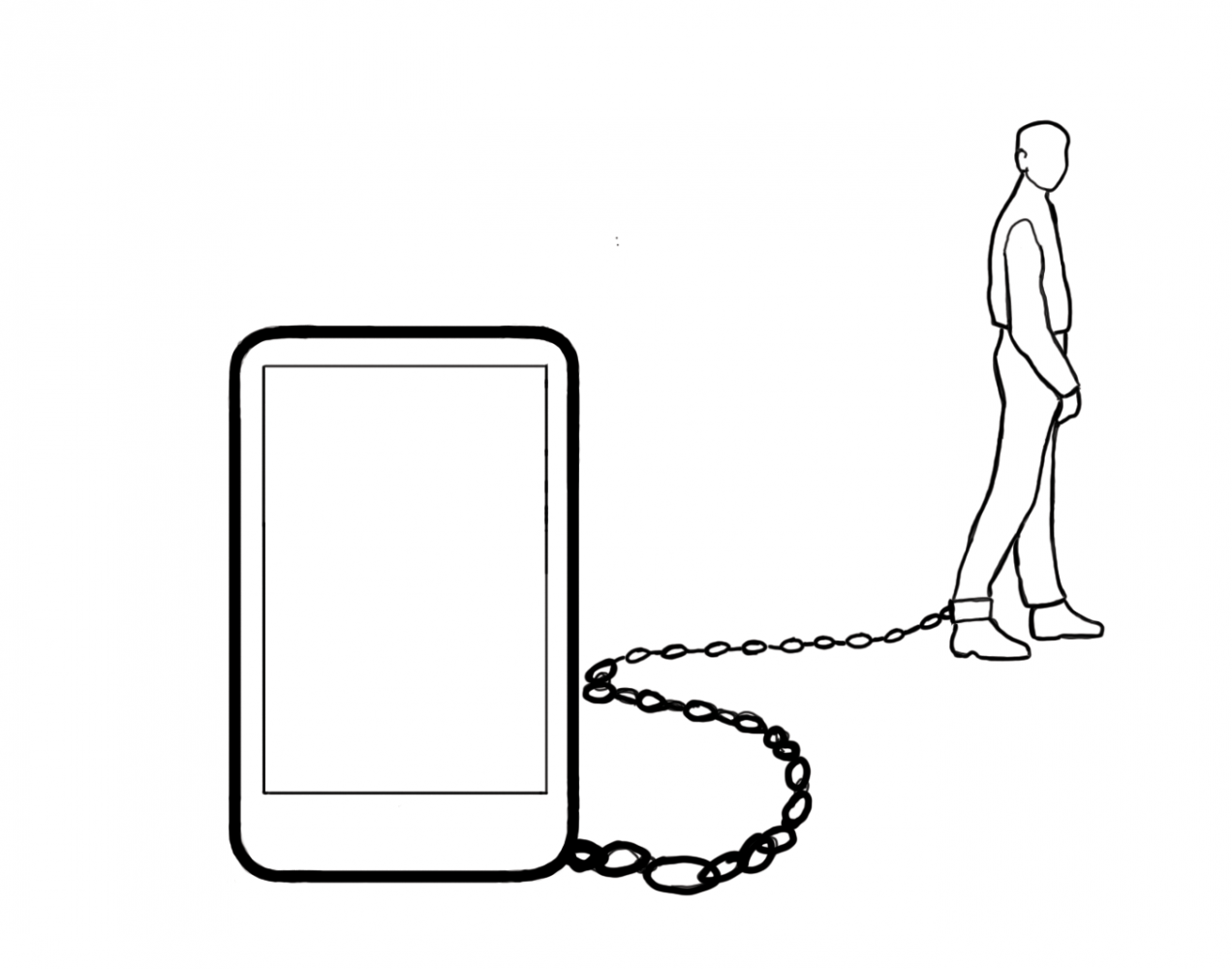 East sophomore Aya Darwiche arrives to school early each morning, long before the hectic rush of the school day’s start. It’s quiet at that time, but she’s not the only one there. She notices that lots of the kids are on their phones, and assumes that they’re listening to music or scrolling through social media. Some, she can see, are using the school’s Chromebooks, perhaps finishing up on last minute homework. Settling into the lounge area to wait for her friend, she easily paints a similar picture.

“Part of it is just the conveniency; [smartphones are] within hand’s reach,” Darwiche says. “So why not use them?”

A digital report by Data Reporta, a web-based portal that offers hundreds of free reports packed with data, insights, and trends, found that there are currently 4.39 billion active internet users in 2019, a number that has risen by 366 million since last year. According to a survey report by Pew Research Center, of 21 countries, 75 percent of cell phone owners text and an average 50 percent use their phones to take pictures or videos. In the U.S., 73 percent of 18-29 year olds regularly use cell phones to access the internet.

Darwiche, who has relatives in Beirat, Lebanon, uses this internet access to communicate with them regularly. For her, technology plays a key role in connecting her to a family she wouldn’t normally be able to reach.

“We use technology to talk to them, see how they’re doing, and they use it to check on us. I talk to my cousin who lives in Michigan almost every day and I speak to family overseas every weekend,” Darwiche says. “We use WhatsApp to communicate because you can text and do a voice or video call. We’ll share anything from accomplishments [to] pictures and videos.”

Professor of Sociology at The Ohio State University Jeremy Baker, who also teaches classes for the University of New Mexico, feels that this long distance connectivity is a definite plus of modern technology.

“[People] can keep in touch with loved ones in a much more day-to-day way that [they] couldn’t before,” Baker told Spark. “In the 1980s, or even into the 90s, [they] couldn’t communicate with people who were across the country without paying long distance fees, so that’s a really good thing. On the other hand, though, [people] do need to be more aware of how the technology [they] use impacts [them]. In particular, [they] need to think about ways we aren’t necessarily aware of.”

Similarly, Professor of Urban Affairs and Planning at Virginia Tech Tom Sanchez told Spark that people have always seen an evolution in technology, but just as today’s technology has allowed new possibilities, it’s important to have caution with technology and to think about it’s  possible implications.

According to Founder and CEO of Domo Josh James, in 2017, there were 2.5 quintillion bytes of data generated per day, with 90 percent of that data having been generated from 2015 to 2017.

“[Technology is] a positive in the sense that [people] have access to more information, which [it is] assumed will help [them] make better decisions in [their] daily lives,” Sanchez says. “The flip side of that is [that people] almost have access to too much. Then, the challenge becomes sorting out what is the appropriate information.”

In 2019, Pew Research Center found that 96 percent of Americans own a cellphone of some kind, with 81 percent using smartphones in particular (an increase from the 35 percent in Pew’s survey from 2011). According to a media poll in 2016 by Common Sense, the majority of families didn’t feel that devices were hurting their familial relationships, but 66 percent of parents felt their kids spent too much time on their mobile devices, and 52 percent of kids agreed.

The Common Sense poll found that 59 percent of parents felt their kids were “addicted” and that 50 percent of teens say the same. California State University Psychology professor Larry Rosen agrees that the label is fitting.

“[People] exhibit signs of both addiction and obsession, which access two different chemical systems,” Rosen says. “When [they] crave something and need more and more [of it] to feel the same pleasure, that is addiction. When [people] are worried that we are missing out on something and need to check in, that is a symptom tied to obsession. In that way, [people] are both obsessed and addicted.”

Professor of Psychology at Stetson University Chris Ferguson wouldn’t necessarily agree with the sentiment. Ferguson told Spark that using the word “addiction” would be painting technology use akin to substance abuse, which is not a valid comparison. According to American Society of Addiction Medicine, addiction is defined as a chronic disease of brain reward, motivation, and memory related circuitry.

“People can overdo almost anything fun and technology can be one of those things. [But] it’s pretty rare to see it become a clinical issue,” Ferguson says. “Of course, physically, the more [people] rely on technology, [they] may experience things like worsening eyesight and reduced physical strength, but that began long before the current technological advances [such as phones, laptops, etc.].”

A scientific study by Paula Hakala revealed that frequent computer-related activities such as the use of computers, the internet, mobile devices, playing digital games, and watching television, has increased the risk of neck, shoulder, and lower back pain in adolescents. According to The Vision Council, a global voice of the optic industry, 60.5 percent of Americans who use digital devices for more than two hours a day have reported eye strain. Darwiche herself has felt the effects first hand.

“My eyes get dry and irritated, and my muscles start to ache,” Darwiche says. “Sometimes, my vision gets blurry.”

Baker says there can be a lot of criticism when it comes to the use and abundance of technology today According to Baker, much of it may fall onto the younger generation for seemingly always using their mobile devices. Baker feels that this view is unfair. From his perspective, it’s not the fault of teenagers at all.

“It’s not the fault of any individual that uses [technology],” Baker says. “[People] might have to look at it being the fault of those who are in control of social media itself. Basically, we are being manipulated by companies to act towards [their] benefit in ways we aren’t even aware of.”

Baker says that Facebook is a good example of this manipulation. According to Pew Research Center, Facebook remains one of the most widely used social media sites among adults in the U.S., but they’ve also found that usage of that particular platform by younger audiences has decreased. To Baker, it is a good thing that they’re recognizing how negative [Facebook] can be and drawing away.

“Facebook has the tendency to exaggerate and magnify passionate feelings. [And] by passionate, I mean both very positive and negative,”Baker says. “They’re interested in making money, and making people really angry about things or really happy about things and sharing stories makes money for them. That’s really what it comes down to,” Baker says, “I do not think the problem is kids wasting all their time on their phone. I think the problems are bigger and more structural in society in that.”

Pew Research Center finds that about seven in 10 adults reports using some kind of social media platform (not including YouTube), and that teenagers are especially likely to report that social media is important to their friendships and romantic relationships. Darwiche has had social platforms since she was 12 or 13, but says most of her friends had them even earlier. She’s noticed that for some, social applications are a necessity in being connected.

“It’s not like technology is evil,” Darwiche says. “[It’s] good for lots of things: navigation, communication, and just for entertainment. Life really wouldn’t be the same without it.”