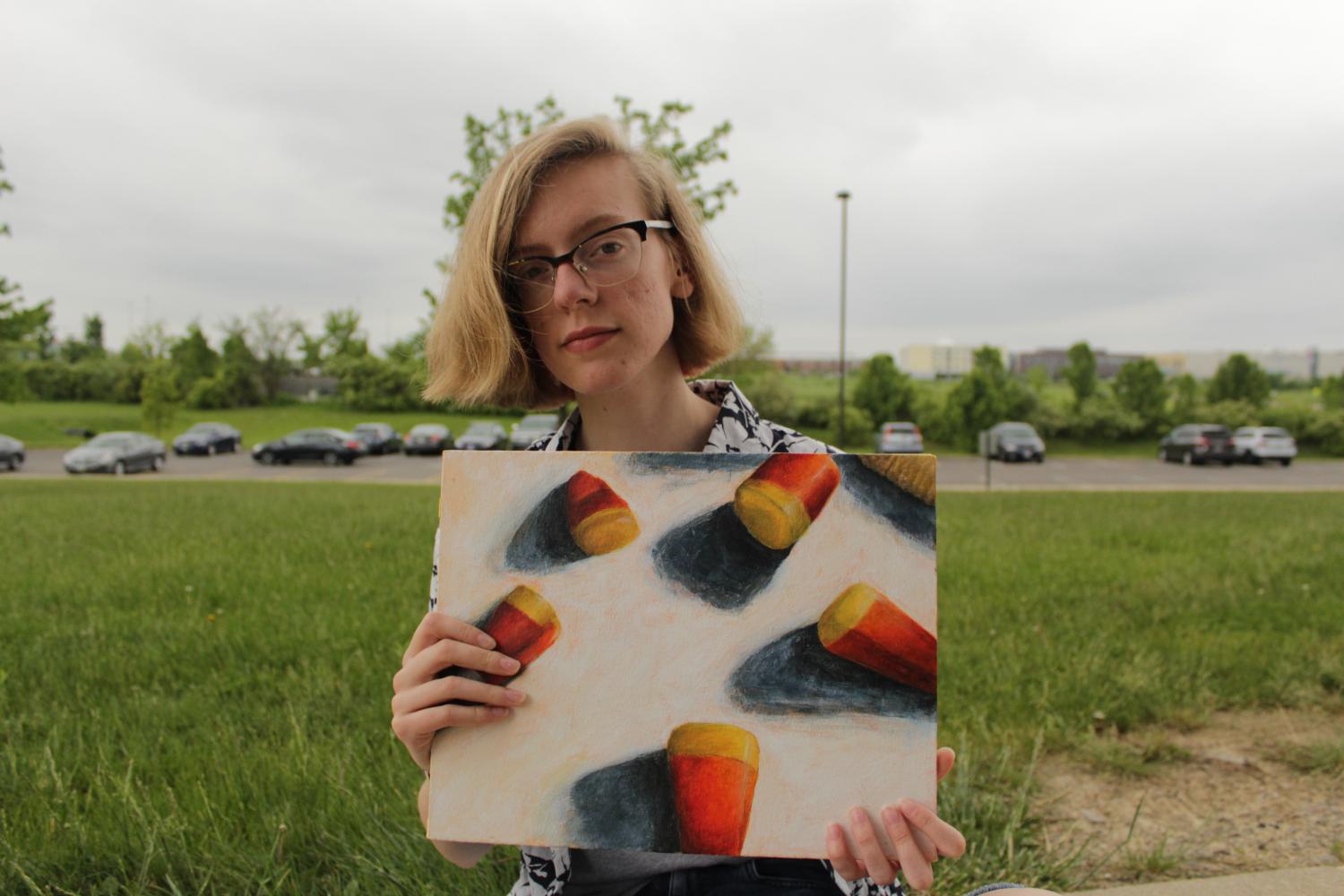 East sophomore Hal Durman poses with their favorite peice, "Spooky," which received a Silver Key Award at the Scholastic Art Awards in February 2019.

Letting their backpack fall off their shoulders as they get home from school, an artistic vision formulates in their mind. They collect their supplies and create a makeshift palette out of a paper plate and a few paints. Brush strokes sweep across the paper, new ideas swirling around in their mind as they go, influencing their every decision.

East sophomore Hal Durman, referred to with they/them pronouns, spends their free time creating art, both in and outside of the school. Hal is currently taking Drawing and Painting III, and derives most of their inspiration from the content of this class.

“I would describe the art I create as traditional—oil pastels, pencils, charcoal, and paint,” Hal says. “I don’t really have [a style]; some of what I make is realistic, and some is not at all. It just depends.”

Hal has been interested in art for a majority of their life—since they were about five years old, they believe. Hal’s older sister, Hannah Durman, can attest to this, as she has seen Hal’s art evolve immensely throughout the years.

“[Hal’s] always been very artsy, and always creating things,” Hannah says. “[Hal] loved, even when we were very little, playing with Play-Doh. That was probably the earliest [memory], just them creating everything that they could think of.”

The passion that ignited in Hal as a child has now transcended into their work as a high schooler, as they’ve continued to grow and learn from their artistic experiences. They’ve had the opportunity to showcase their pieces in both school and regional shows, gaining some recognition along the way.

“[Hal’s] had a painting in the Scholastic Art Awards Show, had a piece entered in the Ohio Youth Governor’s Art Show, and had some pieces displayed at our school,” East’s Drawing and Painting teacher Linda Augutis says. “[Hal] had this personal vision, something to say in their art, which makes them stand out.”

This “vision” that Hal has created for themself can, in part, be attributed to the academics they’ve been involved in over time. Fine Art I, taught by Emily Edwards at the East Freshman campus, has been most appealing to Hal thus far, as it’s given them the option to explore many different mediums.

“Edwards was a large contributor to the reason why I’m still doing art,” Hal says. “She encouraged me to push the boundaries of what I was comfortable creating, and made me more confident in myself.”

Through Edwards’ four years at the freshman campus, Hal stuck out to her as one of the more self-assured, driven students, working relentlessly on their craft.

“I think [Hal’s] always known who they were,” Edwards says. “[Hal] wasn’t worried about, ‘what do my peers think of me?’ ‘Are they going to accept me?’ and ‘Oh, I can’t take a risk, because I’m too worried about my peers.’ I always loved that Hal was very convinced in who Hal is.”

Hal’s girlfriend, Anna Biddle, has also been able to see Hal’s passionate attitude radiate from them daily. Although Biddle doesn’t know much about art, she’s there to support and encourage Hal in their artistic journey.

“Hal’ll [normally] send me things that they’re working on,” Biddle says, “Every time Hal makes something, I’m like, ‘wow.’ When they’re talking about it, you can really hear how excited and happy it makes them.”

Hal’s favorite piece is a candy corn canvas painting, entitled “Spooky.” This piece won a Silver Key at the Scholastic Art Awards and is one of the reasons why they have chosen to continue doing art long term.

“After I completed the candy corn painting, I was like, ‘wow, I’m actually pretty good, I think I could do this for a while,’” Hal says. “When you look at it, you can just tell that I worked hard on it, and that I spent a lot of time on it. It’s just so fun to be able to express myself, and make everything that I make my own”

Although Hal’s a sophomore and has a few years before college, Hal has already found a passion and decided what to pursue in life. They hope to study something related to art, either Art History or Fine Arts, in order to potentially become a teacher in this field.

“Being an art teacher and having students that are so passionate about art, like I am, would be so fun,” Hal says, “to be able to inspire other kids to pursue what they want to do.”