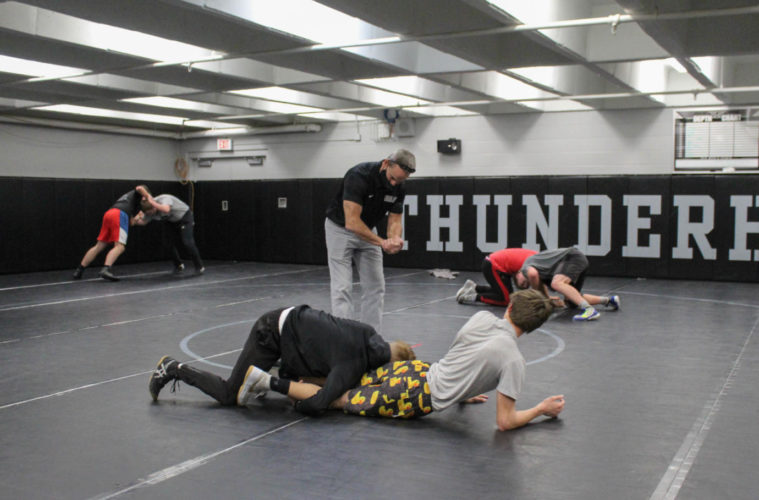 Under the watch of veteran coach Scott Fetzer, East wrestlers follow their new safety protocols during practice by sticking to one opponent and spacing out on the mat.

Athletes Take On the Pandemic

Coaching high school sports is full of unseen pressures – parents, scholarships, and unrelenting competition. However, for East boys varsity coach Clint Adkins a global pandemic has recently been thrown into the mix, complicating and completely redefining what it means to lead a team.

“One of the areas that really stinks for the kids is they lost the opportunity to play in front of a big crowd and big atmosphere,” Adkins says. “I think back to [this season’s] Lakota West game (a 54-50 loss and the first loss to West at home in seven years), which is usually a sellout of 3500 people, instead we had 250.”

The occupancy in the East gym is limited to 300 people not including coaches and players, giving basketball players four tickets for family members and cheerleaders three. According to East Athletic Director Rich Bryant, the school uses electronic ticketing to keep their numbers in check.

“If you do it right, you only are able to sell the amount of tickets that you can have in the gym,” Bryant says. “We know everyone who’s coming in advance and no one’s allowed to just walk up and buy a ticket.”

While East’s mens’ basketball team maintains some normalcy from past seasons, the girls basketball program has hit more than a few bumps in the road during their 2020-2021 season.

Many of the schools they play against only have two teams which varsity and JV1 normally take on, leaving the JV2 team to scramble in order to find another school to play against. This complicated scheduling as well as cleaning after each game, custodial staff members take on the responsibility of disinfecting bleachers, benches, and any other surface that could spread the virus before the next crowd of people rolls in.

“This year it’s been all over the place because we never know when an individual team might have to cancel because of COVID,” East varsity player Liv Hines says. “It’s unpredictable but at least we get to play the sport we love.”

On Jan. 25 the girls will go head to head with Ursuline. Since the private school only has two girls’ teams, Hamilton Baden is being brought in to play the 4:30 game against the JV2 team. In the transition between the two games, athletic maintenance individuals Patrick Dugan and John Wilson will be in charge of sanitizing equipment and other points of contact.

The pandemic has also impacted those on the sidelines, as well as those on the court. Farrah Miles is the only junior to cheer for both varsity basketball and football this year at East. With five years of experience under her belt, Miles has witnessed firsthand what it’s like to be a cheerleader during the COVID-era.

“The worst part about cheering with masks is how muffled our voices become,” Miles says. “It’s already hard to hear each other on the sidelines, but the crowd hears even less.”

Every cheerleader has their own set of pom poms that they don’t share so they don’t have to worry about cleaning them in between uses. However, they must keep their masks on at all times and coaches administer temperature checks before practices and games.

The concern for COVID doesn’t stop on solid ground; the swim team has also had to make changes due to the pandemic. Lakota head swim coach Dennis Beck said the virus has had a big impact on their numbers. The freshman class especially has been lacking swimmers this year.

“I also think there’s some social spirit stuff that we’ve lost over COVID,” Beck says. “Cheering is a perfect example because we would all stand in a big group, now we can’t even do cheers because we’re all masked and we can’t have people closer than six feet.”

The facility that hosts the swim team recently placed clear plastic dividers between lanes to keep swimmers as distanced as possible and limit each lane to three people. Swimmers are required to wear masks until they’re on the blocks and they’re expected to put them on immediately after getting out of the pool and drying off.

“Spectators aren’t allowed at meets so there’s definitely a lack of motivation to do well,” East junior and varsity swimmer Maddi Kidwell says. “It’s tough putting your mask on after getting out of the water because it sticks to your face.”

Wrestlers have seen their sport encounter a lot of changes over the last 10 months. Regularly  they would be free to practice with any teammate of their choosing. However, contact tracing forces wrestlers to stick with one partner for the season. This shorthands them on the opportunity to train with different types of wrestlers.

“The biggest challenge is trying to learn and get better at wrestling while following all of the new rules,” varsity wrestler Ashtin Reip says. “Many of them get in the way of learning.”

The team has also been hit hard with scheduling discrepancies. Schools have to cancel matches at the last minute when an athlete tests positive, leaving coaches to scramble to find a new team for their wrestlers to compete against. On Jan. 18 an East wrestler tested positive, forcing the team to cancel their dual against West.

“Wrestling isn’t a new program but our wrestlers don’t get the attention they should. Those kids have been training since November like all of our winter sports and the constant unknown whether they’re going to be able to compete is draining.” Bryant says. “And what I found is when the kids are struggling, parents soon follow.”

Despite these drawbacks, Bryant has faith in the school’s capabilities.

“We have to hold people accountable across 28 different programs,” Bryant says. “Are we perfect? No. But I’m incredibly proud of how our staff and students have handled this situation.”