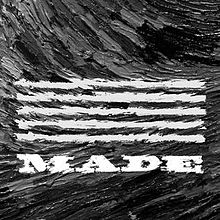 MADE by Big Bang

The music video releases of “Fxxk It” and “Last Dance,” along with the audio release of “Girlfriend,” mark the suave conclusion of Big Bang’s third studio album “MADE.” As the final installment in a series of samples released over the course of twenty months finally hit iTunes, “MADE” displayed the band’s ability to transform the pop music scene overnight with an unlikely combination of soulful ballads, laidback rap tracks and upbeat, mood-lifting anthems.

As the seventh song on the album, “Bang Bang Bang” serves to refresh our memories of what to expect from Big Bang. Reminiscent of their past sporadic and hyped tempos, the warchant-hip-hop fusion fell nowhere short of striking the right chord with its long-time fans who waited three years for another studio album from the group. With its transitions between fierce vocals, catchy one-liners, and heavy club beats, the track deserves its position as the most viewed video from “MADE,” sitting at over 193 million views.

One of the first upbeat songs revealed from the album, “Sober” sets a new standard for the direction in which the band is steering. Kicking off with a playful synth pop beat, the listener is thrown for a loop by the agitated lyrics describing their inability to satisfy themselves through the expectations of other people, symbolized by a chorus deeming their hatred of staying sober.

“Fxxk It” takes the cake for showcasing Big Bang’s drastic evolution from previous albums. The track takes on the R&B genre with its accordion-based backtrack and bare simplicity while still maintaining the powerful vocals and chantable choruses carried out through the rest of the album. Rich with a “no regrets” vibe, “Fxxk It” sings about taking a risk by openly declaring their unique love for a woman.

On the slower side, “MADE” features songs like “Loser” and “If You,” both of which are stripped down to showcase the members’ individual vocal abilities. The ballads on the album carry the weight of the lyrics, being made up of their personal musings such as, “At some point, I started looking at the ground more than the sky” from “Loser.” Even on the slower side, none of the songs fall into the trap of cliche love confessions with shallow interpretations, a recurring theme with pop music.

“MADE” rightfully dominated all major Korean music charts simultaneously, leaving second and third positions to the remaining, mellower songs. Between topping the iTunes album charts in fifteen countries and the two latest title tracks racking up a combined view count of over 26 million in four days, Big Bang deserves their perfect all-kill by a landslide.