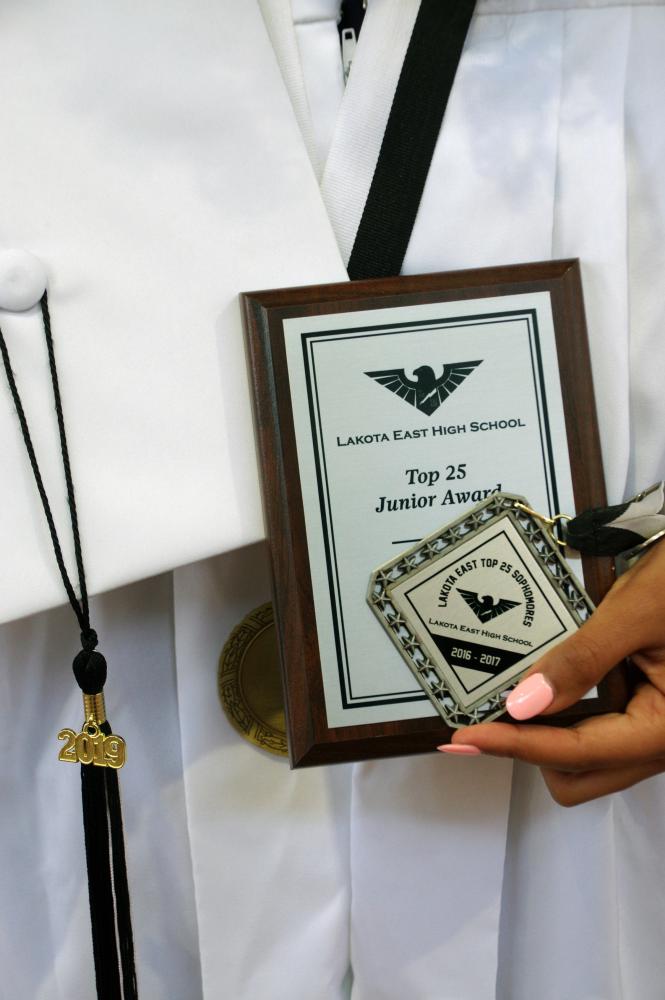 As East recognizes two valedictorians of the senior class for the first time ever, other local high schools are making changes to how they recognize students for their academic achievements.

The walls of East Main Street are decorated with plaques recognizing student achievement, from state championship titles to National Honor Society members, to Journalist of the Year winners. Among those plaques are ones commemorating the academic achievement of the “Top 25” seniors in the twenty-one graduating classes of East, along with a photo of that year’s valedictorian and salutatorian.

This year, the class of 2019 will recognize two valedictorians in the senior class. With the top two cumulative Grade Point Averages (GPA) being 4.7974 and 4.7944 after the seventh semester, they are closer than ever before, said Principal Suzanna Davis, who made the decision after consulting with other administrators.

“This was statistically [the] closest two GPAs we’ve ever had, so the decision was not made lightly, and it was not made on a whim,” Davis said. “It truly was a conversation with a multitude of people talking about the two GPAs.”

Based on the guidelines included in the student handbook section of the East planner, to be eligible for the honors of valedictorian or salutatorian at East, “students must have attended their last three consecutive semesters at East.” The honor of valedictorian is “based on class rank standing at the end of seven semesters.” In the event of a tie, ranks and GPA can be calculated into the third quarter. However, as was the case this year, “final decision is subject to review by the building Principal.”

Similar guidelines are not included in the West planners. Multiple communication methods went unanswered from West.

To Davis, selecting who would receive this honor was not exclusively based on numbers.

“The valedictorian is an honor that gets bestowed upon the top academic achiever—or achievers in this case—in the senior class,” Davis said. “The term ‘valedictorian’ does not insinuate class rank, because there is a person that has the number one class rank, and then number two class rank [on their transcript].”

The Lakota Board Policy 5430 states “No student shall be eligible for graduation honors, such as Valedictorian, etc. unless they have been enrolled in the specific school as a non-part-time student (per Board Policy 5111.03) for four (4) consecutive semesters prior to the final semester utilized for the purpose of determining such honors. The standing or rank in the senior class and the top scholastic honors of Valedictorian and Salutatorian are determined by averaging the higher of either final average or semester examination marks for each subject taken in grades nine – 12. Only the first semester of the senior year is used.”

The district has the policy in place so that the two schools must rank students, but East and West can recognize their students for their rank (or not at all) as they see fit. Lakota Curriculum director Andrew Wheatley said the district is not looking to make any changes concerning this policy at this time.

“I can’t say specifically that [Lakota] is planning on making any changes right now,” Wheatley said. “But I can say that we’re always exploring options and trying to figure out what’s best for our kids.”

In addition to the co-valedictorians, 26 students were recognized in the Top 25 seniors. This is not the first time the “Top 25” has not been 25 students, including the class of 2017. Davis believes that over the last several years, this has become “the norm rather than the exception.”

“The reason for that is, when we get to the person ranked number 25, there is traditionally a very small margin for a couple of people right around 25,” Davis said. “So you may have two or three people right around 25 that are very close in terms of their GPA, but traditionally there is a break. Statistically, it would be a difficult decision to make to say number 26 is or isn’t going to be included.”

According to Davis, at that point, the honor of Top 25 becomes a “numbers game,” but she tries not to get too caught up in the number that is a students’ GPA, and students agree. Of the 53 members of the Top 25 across the four grades surveyed, 76 percent of them agree that the “Top 25” doesn’t necessarily have to be 25 people in the event of a tie. Davis has said that “perhaps we consider having a conversation about changing the name.”

“We’re going to recognize academic achievement, and recognize the top academic performers, [and] if that means 27, because they’re that close, we’re going to go to 27,” Davis said. “I’m not going to get caught up in the number 25.” 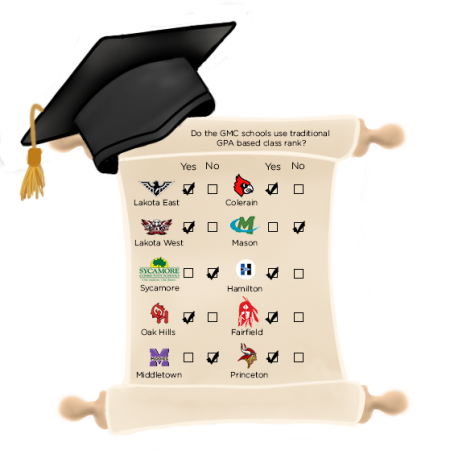 Top 25 senior Heath Wilson thinks no matter what the honor is called, the competition aspect will still exist.

“Without a complete reform of the entire GPA system, almost every other system in place of recognizing our top students would use the same principle,” Wilson, who is recognized as being one of the Top 25, said. “Replacing Top 25 with a percentage just invokes the same level of competition with a different name. That being said, these students work immensely hard and should be recognized accordingly.”

Davis agrees with Wilson, recognizing that student’s academic achievements should not be limited to a number, such as GPA and rank.

“I think we lose sight of the fact that there are people attached to these numbers,” Davis said.  “I do get a little bit frustrated when there’s this external dialogue going on that’s so unbelievably focused on numbers and placement and ranks, because there’s a lot of great work going on in our school.”

Other schools have done away with the system of class rank completely. Sycamore High School has not included rank on transcripts or selected a class valedictorian in the last 10 years.

“We only track rank for scholarship purposes for students,” Sycamore Guidance Counselor Brian Sweeney said. “Our student body President is the master of ceremonies at graduation and either that student or the senior class president (if it’s not the same person) will give a speech.”

According to Walnut Hills High School Counselor Patricia Morgan, the school will no longer be ranking students starting in the 2019-2020 school year.

“We currently rank two ways: weighted GPA and unweighted GPA. For the college admissions process we send the weighted GPA,” Morgan said. “Beginning the 2020 school year, we are no longer ranking students. We hope this will eliminate some anxiety associated with the academic competition.”

“The recognition system will reward our students for genuine academic success based on their academic accomplishments,” Dodd told Spark in an email. “This will help reduce the overall competitive culture at Mason to allow students to focus on exploring learning opportunities that are of interest. Providing these opportunities also presents us with the responsibility of focusing on the mental health of our students.”

East co-valedictorian Julia Finley thinks that the premise of what Mason was trying to do was with good intentions, but the competition aspect of class rank is a motivator for students.

“What they’re really trying to do by eliminating class rank is to help the mental health of their kids, but there is basically nothing in store for the mental health of their kids in the first place,” Finley said. “So why don’t they work on that instead? That would help the problem while keeping the competition aspect that makes us work hard. Because if I didn’t have the competition, I wouldn’t have worked as hard. But if they care about our mental health, all would be well.”

“Without a complete reform of the entire GPA system, almost every other system in place of recognizing our top students would use the same principle. That being said, these students work immensely hard and should be recognized accordingly.”

Under Mason’s current system, class rank is not shared with students and only calculated for the sake of determining who would receive the graduation honors. Dodd hopes this transition will be the start of changes that will allow students to create “opportunities to learn in a safe and inviting learning environment.”

“The paradoxical nature of class rank within the culture of Mason does nothing to decrease the competition among students or the ‘gamification’ of choosing courses to increase the number of add-ons to boost students overall GPA,” Dodd said. “Transitioning to a weighted 5.0-grade point scale honors the level of engagement and thinking required at an Advanced Placement (AP) and Honors course level by a student and also decreases the emphasis on ‘chasing’ add-on points due to the GPA not being able to go above a 5.0.”

East co-valedictorian Idris Malik can understand where Mason is coming from by eliminating these factors.

“I feel like [that system] would really reduce stress for lots of people, and people would focus more on taking harder classes to learn and not worrying too much about grades,” Malik said. “Overall, it would be a better system. It rewards those who put in a lot of effort, without having as high of stakes.”

At Mason and at East, some students choose courses exclusively for the weighted GPA attached. However, at a school like Sycamore, where rank and graduation honors are not awarded, Sweeney said he doesn’t see students choosing courses for a GPA boost.

“I don’t see students playing that game at Sycamore,” Sweeney said. “Students select courses based on interest and rigor in preparation for the college admissions process. We encourage students to step outside of their comfort zone and challenge themselves. I think not ranking and not having a valedictorian has created a healthier, academically competitive culture in our building.”

Though Lakota officials are not looking to make any changes to their policy, Davis is always looking to recognize as many students as possible for their academic achievements.

“We need to continue to find ways to amplify and elevate all types of student achievement,” Davis said. “I would like for us to continue to explore within our own school environment where are there opportunities for us to truly look at academic achievement on a larger scale.”