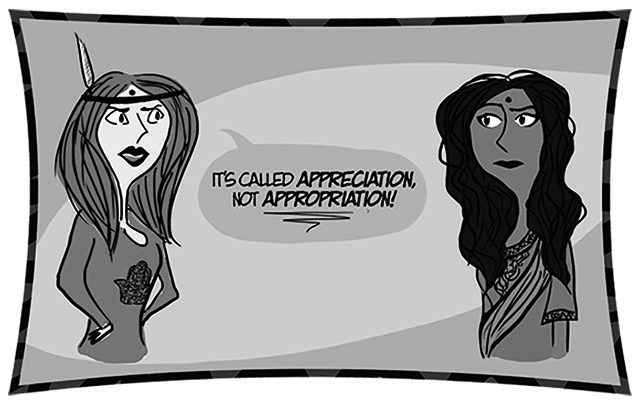 Halloween is spooky fun for people of all ages. Horror movies, free candy, and most importantly: the costumes. There are all sorts of ways people dress up, sometimes cute, perhaps scary, and a little bit sexual here and there. This is the perfect time of the year to be creative, but it’s easy to cross the line between creative and offensive, and some cultural-based costumes are inappropriate.

Costumes are a big part of the Halloween tradition; it’s fun to just dress up and walk around getting free candy, but even this can get a little risky. Recently, there has been a clown epidemic. The “Clown Clan” has been terrorizing citizens around America, and ironically, just in time for October. But it’s not just clowns that are upsetting people, important aspects of cultures are being offensively portrayed by certain costumes being worn.

“Many of the common Halloween costumes people wear, such as warbonnets, are sacred to Indian tribes,” said Devine Hiatt from Ohio University (OU) Daily. “A warbonnet, or a headdress [for] non-Indians, are seen as items of great spiritual and political importance, only to be worn by those who have earned the right and honor through formal recognition by their people. Yet, we can buy one on Ebay for a cheap price and disgrace their traditions.”

Brittany McKane, a member of OU’s American Indian Student Association and a citizen of the Muscogee Creek and Seminole tribes, warned that perpetuating these cultural stereotypes can be harmful in many ways.

“They’re not real representations of us, so it trivializes our culture,” McKane said. “I doubt anyone will dress up as a modern Indian with a law degree. We’re people. We exist in modern society, and there’s no depiction of that when people dress up as us in costumes.”

Another common costume catastrophe is the sugar skull, or Calavera, a decorative piece of art usually made of sugar, traditionally used in celebrating Día de Los Muertos, or Day of the Dead. This holiday is most prevalent in Mexico, and celebrates life, prayer and remembrance of friends and family who have passed away. It is believed that the gates of heaven are opened at midnight on Oct. 31, and the spirits of all the dead children are allowed to reunite with their families for 24 hours. Then, on Nov. 2, the spirits of the adults come down to enjoy the festivities that were prepared for them. There are lots of decorations that are put to commemorate the Day of the Dead, such as flowers, candles, etc., but the most special out of them all is the sugar skull.

With many people trying to find ways to commemorate the dead and pay their dues as best as they can, there are times when trying to celebrate Halloween could end up offending a whole culture. The sugar skull is used as a decoration to show respect for the dead, but now with Halloween, it has been turned into something sexual. People paint their faces with a skull design, put on stockings and very short articles of clothing. Being cute by looking like a decorative item for the dead isn’t appreciated by people who take the holiday seriously.

Along with Mexican culture, people have also been discriminating a culture in Europe for a relatively long time: the Romani people. The Romani are believed to have arrived in Europe from northern India in the 1400s. Europeans called them gypsies because they thought they came from Egypt. This ethnic minority is made up of distinct groups called “tribes” or “nations.” Most of the Romani in German-occupied Europe belonged to the Sinti and Roma tribes. Typically, around Halloween they commemorate those deceased by having parties, praying, and spending time with family. Similarly to the sugar skull, the Romani culture has been turned into a sexual costume, sometimes making them look like pirates, which inaccurately indicates that the Romani stole the land they’ve lived on.

There are many ways for people to cross the line. Sometimes it’s disgracing an entire culture by trying to dress up like them, and sometimes it’s sexualizing everything to make it a costume. Offending a whole community isn’t necessary for looking cute or awesome on Halloween. There are so many costumes to choose from, so it’s best to not wear anything that would be insensitive to a culture.