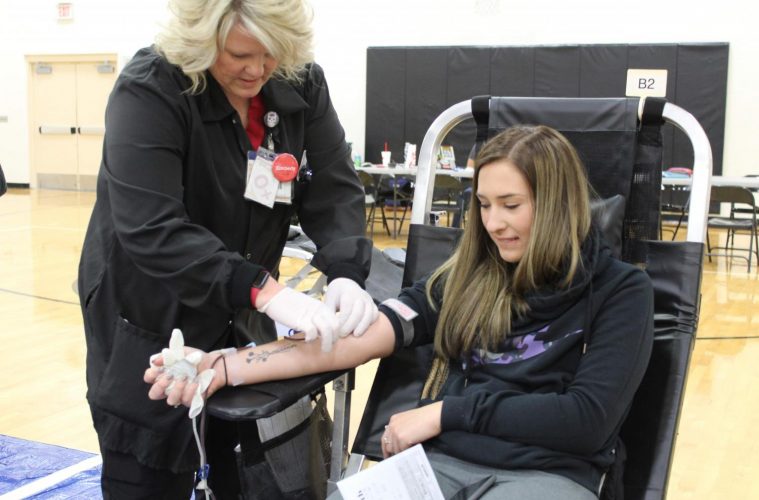 Through the donations from students and faculty members at East, 65 successful units of blood were donated, which is enough blood to potentially save 195 lives.

Hoxworth Blood Center, a program through the University of Cincinnati, offers many blood drives through out the Tri-State. East Med Club partnered with them and held a blood drive where 65 students donated their blood during the school day at East on Dec. 12.

The auxiliary gym was set up and ready for a day of giving back to the ones in need, and was aiming to save lives.

East junior Liz Jantausch tells Spark about why she thinks blood drives are impactful toward the community.

“We have a lot of hospitals around here, so I think that it will make a great impact to all the people who need it for surgeries,” Jantausch said. “When my grandma was in the hospital, she really needed blood, so it was a blessing.”

To be eligible to donate, you must be at least 16 years old with parental consent and weigh at least 110 pounds and be in generally good health.

“We collect blood, we test it and process it and we distributed it to 31 hospitals to 17 counties,” said Hardy, who has been a Hoxworth representative for 34 years. “We provide the blood that saves lives in Greater Cincinnati, Northern Kentucky and Southeastern Indiana.”

Hardy sees an impact through the blood drives held at high schools, and she believes the greatest benefit to blood drives are the new donors.

“Most of our new donors come from high school,” Hardy said. “The benefit is engaging, empowering, educating and motivating the younger generation to be blood donors.”

East junior Morgan Gyger is a first time blood donor, and she shared her experience of donating blood.

“I was a little nervous. They made me wait [until] my blood pressure [and] my heart rate went down,

Gyger also thinks it’s a great opportunity for students to be able to donate at school blood drives.

“I think it is really cool, and it makes it easy for people to be able to donate blood instead of having to find somewhere to donate,” Gyger said. “It’s right in my school, which makes it an easy opportunity to donate.”

East senior and Med Club president Bea Amsalu was in charge of connecting with Hoxworth and their representatives, working alongside with them to organize the blood drive with East Med Club.

East Med Clubs’ leadership team registered students during lunches and promoted the event by putting up posters, going on the announcements and sending information via Twitter.

“We always wanted to have a blood drive but it never really ended up happening,” Amsalu said. “But last year, our leadership team decided that we really wanted to do it and that we’re going to make this happen.”

Williams also mentions how it’s Med Clubs’ second year back organizing together the Blood Drive, and how he thinks it’s great this event is back again.

“I think it’s just awesome to really provide opportunities for students to give back,” Williams said. “There’s always a big push is for kids to do something bigger than themselves and being able to help hundreds, if not thousands of people by donating blood.”

After giving, blood donors may feel light-headed or some weakness, which is why students were also provided with snacks and beverages after donating to help restore their strength.

East senior Abbey Kidd donated her blood because she wanted to give back, and discusses the importance of donating blood.

“I was really nervous, but I knew that it was going to help people. So I wanted to do it and have that experience,” Kidd said. “It gives students real world experiences I don’t think they understand, how much blood is needed, and how easy it is to give.”