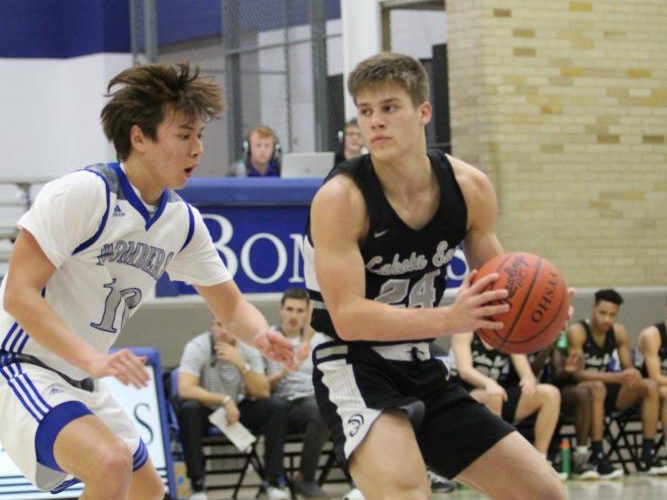 story and photography by Kate Harvey

East Men’s Basketball suffered their first loss of the season to St. Xavier in a painful 45-42 nail-biter. The Thunderhawks steadily trailed the Bombers for the majority of the game, never down by more than 10 points, but couldn’t quite overtake them.

East totalled 23 rebounds, eight assists, and two blocks while maintaining a free throw average of 67 percent. Even after an aggressive start with East senior Will Johnston draining a three-pointer just minutes in, the Thunderhawks were down 18-23 at the half. In an extremely close game, East sophomore Nate Johnson managed to grab a fast break and dunk during the fourth quarter.

East senior and Bellarmine University commit Bash Weiland banked a three-point field goal with 4.3 seconds remaining in the game; unfortunately, it wasn’t enough. Weiland led the Thunderhawks with 14 points, and in a post-game interview said that although East knew they were the better team they, “did not come out and execute.”

“But we have a quick turnaround,” said 6’5 forward .  “We know what things need to be changed in order for us to beat Colerain.”

East’s offensive strategy has begun to evolve after graduating the Greater Miami Conference (GMC) lead scorer of the past two seasons, Jarrett Cox. Focusing less on an individual and more on team cohesion, has helped to develop the program’s “wolfpack” motto.

“We lost three starters from last year,” East’s fifth-year varsity head coach Clint Adkins said.  “A lot of guys are having to step up to play different roles, so because of that, it’s not beautiful right now.  We have a bunch of moving parts that are trying to come together.”

Although disappointed by the loss, the boys are taking it in stride—the EAST way. East junior and 6’7 starting forward Alex Mangold said the experience showed them how to play tough schools on the road and maintain their grit.

“It was a great learning experience for the whole team and especially the younger guys to go through,” said Mangold, who is eager to improve and hungry to win again.

“When it’s all said and done,” Adkins predicted, “I think it’ll be a pretty good season.”