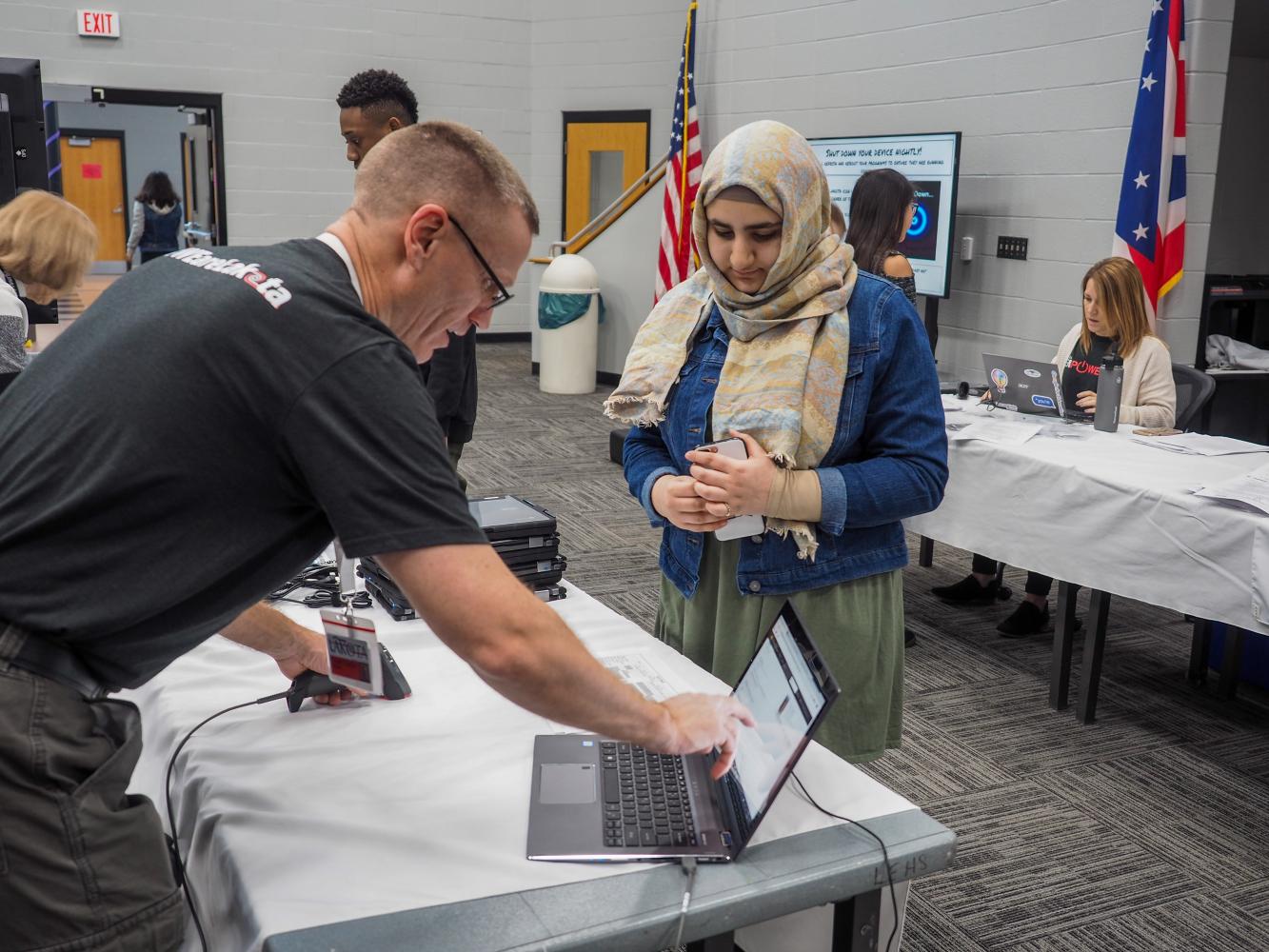 story and photography by Abby Bammerlin | infographic by Caroline Bumgarner

East sophomore Nasma Jarabah opens her Chromebook a few minutes before class. She sees that her laptop is charged and her notes for “Lord of the Flies” is ready to go, right as the bell rings. She walks into English, ready for class.

“I can’t wait to see how the teachers are going to incorporate it into our classes,” Jarabah said. “I want to see how it works out.”

As East students filed back into their classes after winter break, administrators and members of the technology department were preparing the new Innovation Hub for the one-to-one technology rollout.

Beginning with Lakota’s middle schools in October and moving to the high schools in January, students were given Chromebooks as part of the WEareEMPOWERED program. This program focuses on personalized learning, which includes students receiving district-owned Chromebooks to support teacher instruction.

Director of School and Community relations Betsey Fuller explains that the rollout of the Chromebooks grades seven through 12 cost the district approximately 3.1 million dollars. The money came from Lakota’s permanent improvement (PI) fund.

“This fund is used for projects that will have a lifespan of five years or more,” Fuller tells Spark. “The Chromebooks will be turned over to our younger grades once students moved to ninth grade or graduate.”

East Principal Suzanna Davis said that the decision to expand the rollout to the high schools was made three months prior to the Jan. 7 rollout date.

“We had taken the media center offline in December for a lot of different reimagines, and so the media center was already shut down and offline,” Davis said. “[That] gave us the ability to start setting up [the rollout].”

On the morning of the rollout, students began filtering into the Innovation Hub at 7:20 a.m. They were moved into lines where they received a Chromebook, a protective case and charger, stickers, and a packet describing how to work the laptop.

Students were required to turn in two forms before receiving their Chromebooks. The Student Technology Acceptable Use and Safety Agreement, as well as the Lakota Student Device Agreement, had to be filled out and signed by a parent or guardian.

While somewhat nervous about the amount of technology in classes, Jarabah said she was “really excited” for the Chromebooks. She believed the laptops would have a positive impact on her learning experience.

Out of the 212 East students surveyed who have Chromebooks, 73 percent of students currently enjoy their Chromebook.

Davis said Chromebooks won’t change learning completely but will allow teachers to personalize information being taught in a different way.

“The Chromebooks and the addition of the one-to-one technology is a powerful tool to help support great things going on in teachers’ classrooms,” Davis said. “Putting a Chromebook in the students’ hand doesn’t all of a sudden change the way we do things. It’s not the device that makes the difference.”

Before receiving her Chromebook, East sophomore Abigail Jacobs said she was not excited about using the Chromebooks because she gets headaches when looking at a screen for too long.

“I like to write things down,” Jacobs said. “I think I’ll get worse grades [with the Chromebooks], but it will be fine because I’ll just write stuff down in my own time.”

While East sophomore Cameron Shepard is excited for the Chromebooks, his previous experience with one-to-one technology at his old school, Cincinnati Country Day School, made him nervous.

“There are lots of issues that can happen,” said Shepard, who has trouble finding his assignments as well as downloading and saving his work. “If something goes wrong with your [Chromebook] in class, you’ll get behind.”

However, East seniors, such as Madisyn Turpeau did not receive Chromebooks.

“Giving seniors the option to get a Chromebook at the start would have been better because although we’re seniors and this is our last year,” Turpeau said, “That’s still a year without easy access to school related things that need to be done on technology.”

Being someone who uses both paper and digital software for his work, Corris believes using the Chromebooks will give teachers the ability to enhance their lessons as they see fit.

“I don’t think there’s anybody anywhere saying we have to go totally paperless,” Corris said. “The whole goal is to hopefully have students use them in the way that works best for them.”

Jarabah, after using the Chromebooks for about a month, said she enjoys no longer carrying her binders and being allowed to use programs such as Canvas, Google Docs, and Word during class. However, not every teacher uses Chromebooks.

“It’s a little bit disorganized because some teachers want to use the Chromebooks for notes and some want to use paper,” Jarabah said. “I’m still getting used to it.”

Advanced Placement (AP) Human Geography and Introduction to Psychology teacher Kevin Keen has sophomores, juniors, and seniors in his class. For seniors without Chromebooks, he has students share devices, use cell phones, or use the school’s laptop carts.

With the introduction of the Chromebooks to the classroom, Keen said that he still uses Canvas for discussion-boards, submitting assignments and uploading supplemental material.

“To be honest, lessons have not changed too much,” Keen said. “I continue to use all the tools on Canvas for lessons.”

Turpeau explained that she has two classes with juniors and one class that uses Chromebooks.

“My teacher tries pairing the seniors up with juniors when we need to use technology, but if the ratios don’t add up, we use our phones,” Turpeau said.

After having the Chromebook for about a month, Jacobs said that she’s experienced headaches while using the laptops for long periods of time.

“I’m disorganized on the computer, where normally I have my binders,” Jacobs said.

According to Davis, the Chromebooks will allow students to look at “different instructional methods” that could help them as an individual.

“It’s not like we put Chromebooks and kids’ hands and all the sudden the next day like the sky opens up and the sun shines down and everything is different,” Davis said. “It gives us the ability to think differently and provide instruction in a different way that allows students to have a very personalized experience.”

Jarabah believes the Chromebooks will have an overall positive effect on her learning experience.

“Technology is definitely advancing and our school is definitely changing with it,” Jarabah said. “[East is] not staying in one place.”