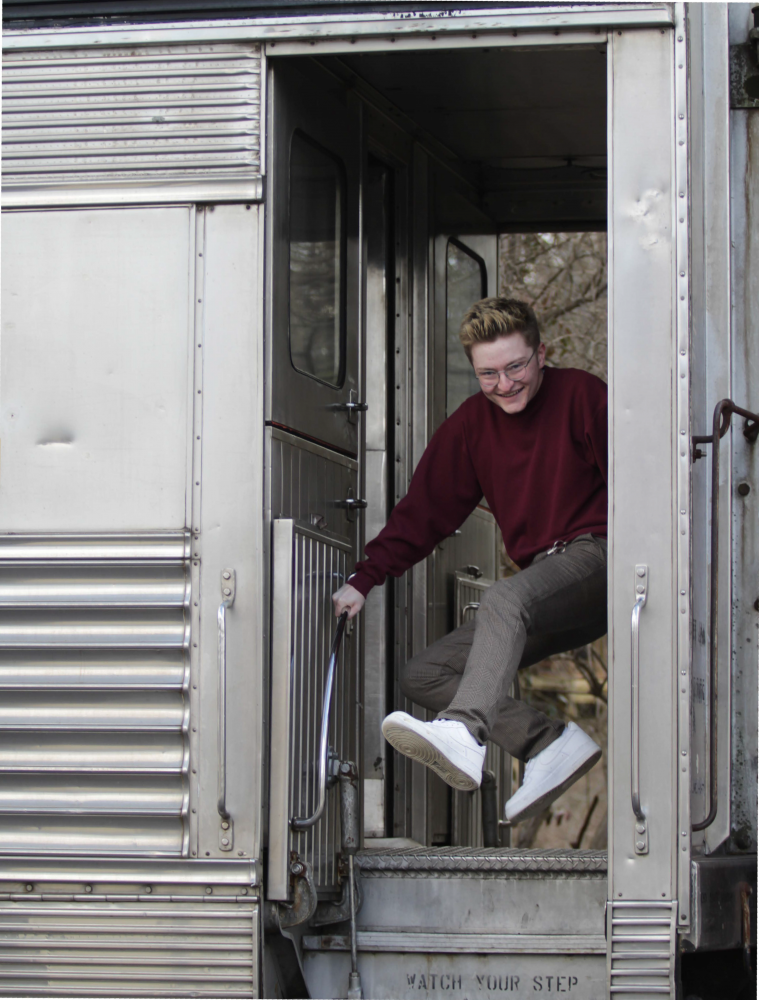 Walking down the hallway, East senior Ryan Kmieske heads to his next period. Heads turn as they see him strutting a daunting outfit consisting of black bulky leather boots, paired with jet black jeans with a chain dangling down his side pocket along with a thrifted red t-shirt.

There is a method to Kmieske’s fashion madness; he says it’s a way for people to judge him based off of his looks. It’s a different form of art for him to express himself to others. His “trendy” looks come with his future at the University of Cincinnati (UC) as he majors in fashion design at DAAP.

Kmieske says that he is excited to be majoring in fashion design to jumpstart a future career in trendy clothing. Kmieske currently is heavily involved in art, but he doesn’t believe it can be a profitable career.

“I’m going to school so I can learn more about design,” Kmieske says. “Although it would be great to do freelance art, it’s not realistic. Going into fashion design will get me a job and I’ll still, hopefully, enjoy it.”

At the Fashion Institute of Technology, 84.6 percent of all enrolled students are female and at Pratt Institute, 54 of the 58 students that graduated in 2017 were female. However, in one of the most recognized fashion shows, Milan Fashion Week, only 31 percent of designers were women.

According to Drexel University Fashion Professor Lisa Hayes, a reason why this change may be caused is due to women wanting to start a family around the same time where higher authority roles are presented.

“There’s an awful lot of international traveling involved,” Hayes says. “You’re traveling three weekends out of a month. it’s a lot of time away from trying to [take care of a family]. I think it’s really difficult and challenging.”

Hayes says that there’s probably a similar criteria about this kind of moving up position in the workforce. At the age of 30 to 45 is a critical career point in a time where if women are going to choose to start a family it’s going to be between 30 and 45.

Based off of a survey done by Glass Runway, starting out in the industry, 70 percent of women aspire to be a top executive whereas 60 percent of males aspire the same role. However, fast-forwarding 10 years, women’s aspirations for the top only goes up to 75 percent where men’s aspirations go up to 100 percent. Kmieske aspires to be an owner of a niche clothing company and hopes to be one of the few niche fashion designers in the country.

Over time ambitions change, but perspectives are changing as well. Hayes mentions that having men in her classes adds a new and more purposeful perspective that many of her female students would overlook.

“If I can express something about myself that someone can pick up through a snap judgment, I feel like it’s important [for others to] pick up on [my personality traits] through my clothes.” —Ryan Kmieske, East senior

“The girls [in my class] love these guys. The men of the program become so popular because it’s just different,” Hayes says. “Whatever the style is that people want, they want to wear it and it doesn’t matter if it’s not comfortable. Males tend to be focused on definite function out of their clothing. They all have different opinions about that in class.”

For Kmieske in his art class, gender doesn’t play a huge role in the final product. It tends to be more of the artist’s role and style that factors in.

“I don’t really focus on other people when I’m in [the art room],” Kmieske says. “It’s more just my thing. Socialization-wise, it’s not a ton different either.”

When it comes to different perspectives that males may provide in the classroom, Kmieske says he doesn’t interact with a lot of guys who are as invested in art like him. Another way he does express himself is through his fashion.

However Kmieske expresses himself, he says that living in this area of Ohio makes him an object of fascination to his peers.

“People either love it or they hate it. The plaid pants [that I wear], guys like to [make fun of] it because it’s different,” Kmieske says. “I feel like girls see me as an object like ‘oh my god Ryan you dress so interestingly’ in like an object of fascination. It’s like a zoo sometimes, but I understand. Like tattoos, this is just another way of expressing myself on my body.”

Kmieske also expresses his personality in the art room and through his art. East junior Anna French is a close friend of Kmieske and has worked closely with him throughout his art processes.

“He’s very outgoing and almost rebellious in a way,” French says. “He doesn’t always listen to what our art teacher says and he kind of just does what he wants. His mind is so open to being creative. Once he has his mind set on something he won’t let go of it.”

One of the biggest reasons why Kmieske expresses himself through art is because he is good at it and that excellence pushes him to only do bigger and better things.

“When I’m in the process of painting I [don’t know what the end product is going to be], it’s more of just my headspace and what I know to do,” Kmieske says. “It’s just how I’m feeling and I’ll do a couple of strokes, leave, come back and I’m feeling completely different and what I put on the canvas is completely different. I just love seeing the end product of my work and how all of my feelings can be translated onto the canvas.”