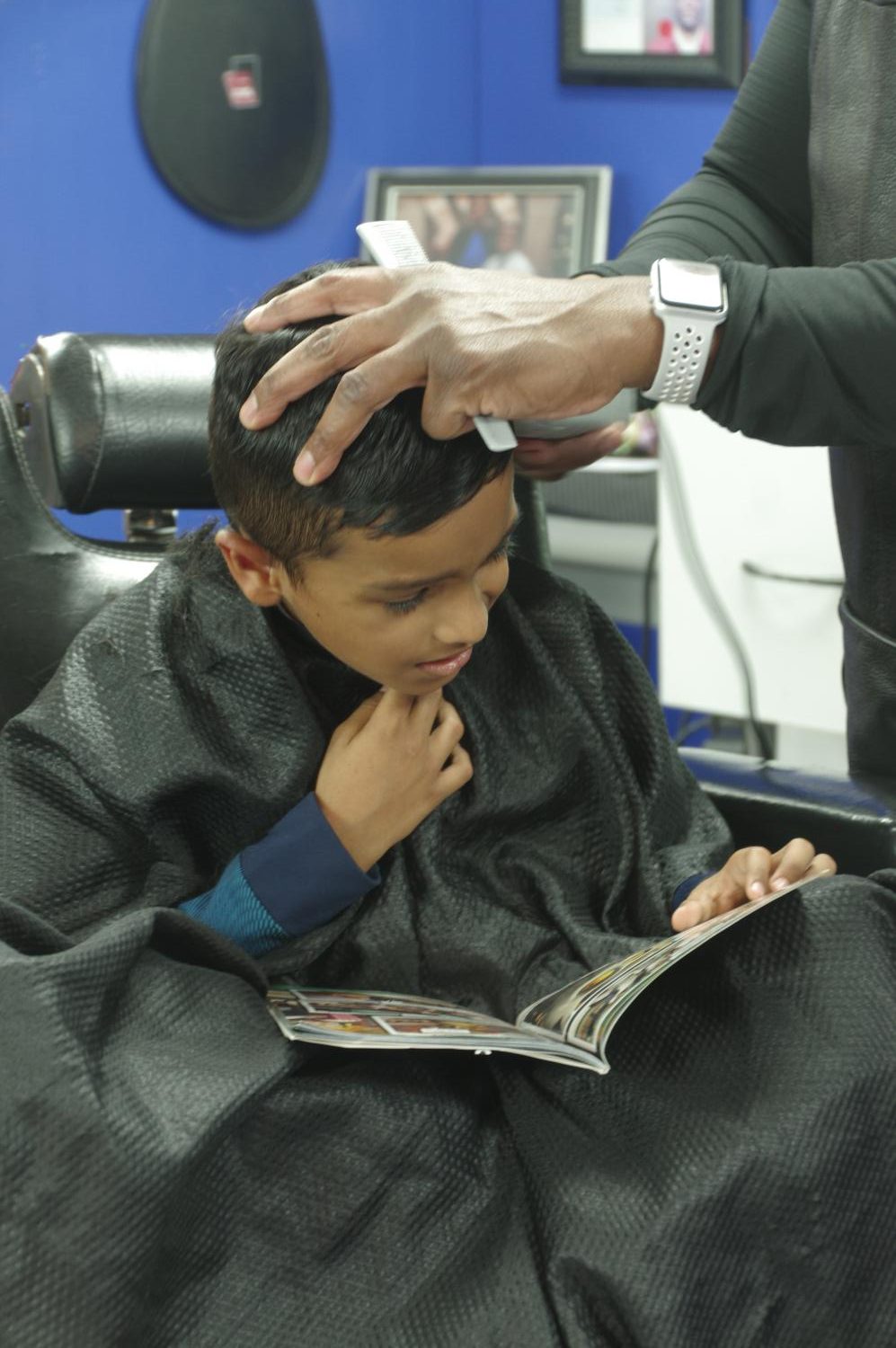 Independence student Haider Ali gets his hair cut by Xquisite Cuts owner Rodriguis Hampton during the Fellas and Fiction program.

It’s a beautiful Tuesday night, and the sun is just beginning to set. He opens his drawer and pulls out his best scissors. He looks at the clock—5:57 p.m—to see that it’s almost time to start. The doorbell chimes as a family walks in and he hurries over to welcome them and help the children pick out their favorite books from the Lakota-donated selection. He always enjoys this first Tuesday evening of the month, when he can do his part to help the community.

From October to May, Xquisite Cutz Owner Rodriguis Hampton offers the Fellas and Fiction program, giving free haircuts to young boys as an initiative to get them to read. The boys get to pick from a wide variety of books that have been donated by Lakota. They then attempt to read the books to their parents and the barber, who help them as they go. Afterwards they get to take their favorite book home to continue practicing.

The program was created as a collaborative effort between Hampton and Angie Brown, a member of the Lakota Outreach Diversity and Inclusion Department (LODI). The department’s mission is to promote a welcoming and equitable experience and a culture that values all its forms.

“All students should have exposure to literacy wherever their day would take them,” Brown said. “The barbershop offers a place where younger people can learn everyday life from elders outside the four walls of a school.”

While Lakota isn’t considered a high poverty district, with only 15 percent of students qualifying for free or reduced lunch, according to United States News (US) and World Report, the district encompasses a variation of incomes.

The Fellas and Fiction Program first began in 2014 as a way to combat those income disparities and bring the district together.

“We [were] talking one day about how we could be more involved in the community,” Hampton said. “[Brown] presented our idea to the Lakota District and they thought it was a great idea, so we just ran with it.”

The Fellas and Fiction program focuses on improving the literacy rates among young boys in the community by giving a supportive atmosphere to encourage them.

“While we understand that academics are of the utmost importance,” Brown told Spark. “We must look at every factor to make sure the student can accomplish the goals to be successful at life. This program builds confidence, facilitates communication skills, promotes family engagement, and most of all develops a love for reading.”

According to a 2009 Program for International Student Assessment (PISA) on Elementary school children, girls outperform boys in reading by an average of 39 points. Put in perspective, this means the average boy is a year-and-a-half behind the average girl in reading skills.

Part of this is related to differences in body chemistry, as boys have a higher need for activity and movement fed by their body’s testosterone, making reading, which requires longer periods of concentration, difficult to master.

“Literacy is a major problem with young boys, so getting them to come and sit in the chair and to read out loud is a huge part of reading success,” Hampton said. “It gets them motivated, and they’re around other kids who are also reading.”

The program has been running smoothly with only a few slow months. Hampton and Brown have been focusing on getting the word out to families in the area. According to Brown, the number of participating students has been increasing every year.

“We have seen community engagement through the donation of a beautiful bookshelf and many books,” Brown said. “We’ve had West Chester Police attend to help read, as well as retired educators.”

Many of the families learned about the program through their school’s weekly newsletter, like the Heitz family.

“We thought it’d be a great way to improve [our son’s] literacy,” said Lakota mom Stephanie Heitz, who has a son at Independence. “Reading is a important life skill.”

“We don’t focus on the money part, seeing the kids happy is what matters most,” said Jeff Craft, an employee at Xquisite Cutz. “I’ve only been here since April and I’ve already seen the impact the program has.”

As the leader of the program, Hampton cuts the childrens’ hair most of the time, but other barbers happily step in to help when the shop gets too crowded.

“[Hampton] loves doing it, he manages everything,” Craft said. “I’ve cut [their hair] a few times and really enjoyed it, but he’s the master at it; a whole other side of him comes out. It’s really cool to watch.”

Hampton noted that every experience he has with a child has been unique and different. His favorite memory was at the very beginning of the program when child a told him “no more Great Clips for me, I only go to Xquisite Cutz now.”

“From then on, I knew that this program would be special and impactful,” Hampton said. “It has been two years, and it still is.”