A hand slams hard on a polished wood table in frustration as laughter fills the Woodland Elementary library on a Tuesday afternoon. Cards surmount into a haphazard pile as those who are gathered around the table frantically try to get rid of the stack in their hands. A sly smile stretches across East Junior Jenna Duckworth’s face as she approaches her last yellow, six card in an intense game of Uno. Before she can place her final card on the table, a call interrupts the whole library informing everyone that it is four o’clock. Kids begin lining up at the doorway as Duckworth hugs her Whiz Kid, third grader Demetrius Stanley, goodbye like all the other tutors.

Whiz Kids is a tutoring program that mainly focuses on reading refinement for elementary students in grades second through sixth. At Woodland, students meet every Tuesday at 3 p.m. for an hour with their tutors, who range from high schoolers to retirees. Usually if there is extra time at the end of a study session, tutors will let their students on the computers or play a card game with them.

“We play Uno a lot after we are done reading,” says Duckworth. ”When somebody has the cards out, we usually try to join their game because I think it’s better than just letting them play [games] on the computer.”

In the Greater Cincinnati area, there are more than 1,300 Whiz Kids and 66 sites, according to City Gospel Mission, the official Whiz Kids website. There are 22 students and 24 tutors enrolled in the Whiz Kids program at Woodland for the 2015-16 school year. Tutoring sessions are usually one hour each week at any location and are meant to be one-on-one sessions between tutors and students.  Elementary students are recommended by their teachers to be placed in Whiz Kids, knowing that the program offers a one-on-one approach to help children succeed in the classroom.

“Everyone in the program is behind in reading to some extent, and sometimes there are extra reasons why they are put into the program,” says Cherilu DuVal, who is the site coordinator for the Woodland branch of Whiz Kids. “[They are recommended] maybe a family situation or they need some extra attention.”

Over the past several months, Duckworth has come to realize the importance of being a tutor and the impact it has had on Stanley. DuVal has seen the hard work Duckworth has put into the program and has seen Stanley’s success through reflective methods such as writing thoughtful observations after each tutoring session about how things went that day.

“Jenna has been one of our reliable tutors, working with a third-grade child who is new to Whiz Kids this year,” says DuVal. “Demetrius has improved by two reading levels so far.” 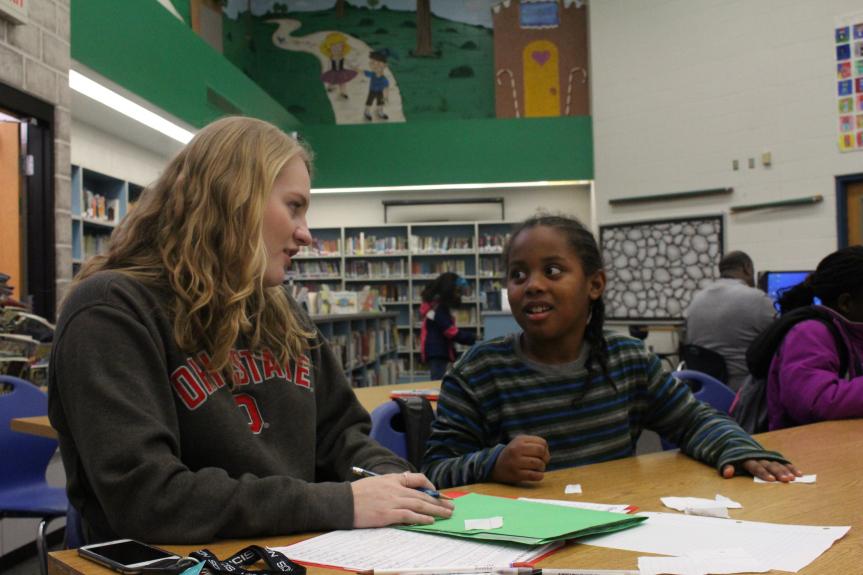 Jenna and Stanley discussing what they have read during their sessions. Photography by Emma Stiefel

Stanley’s mother, Brittany Gooden, speaks fondly of the program and has witnessed the effect it has had on her son the past year and a half he has attended.

“He loves Whiz Kids,” says Gooden, “I guess because of the experience he gets from doing the work with the tutors. He’s very intellectual, so he loves that stimulation.”

As for Stanley, he likes Whiz Kids, with his favorite part of the sessions with Duckworth being the reading.

“We get to read and do a lot of cool stuff,” says Stanley. “We make paper airplanes, play games [and] play Uno.”

In elementary school, reading progression is measured through a lettering system. Typically, third-graders fall into the levels N-P, according to Reading A-Z. For Stanley, the ultimate goal is to improve his reading skills as much as possible.

Stanley has experienced major improvements in his reading skills this year and has moved up from level J to level L during the six-month period from September to February. Students generally increase by four reading levels annually in the program.

“He’s a little shy sometimes about certain things, but [overall] he is pretty outgoing,” says Duckworth. “He likes to talk to other kids and other people. He’s a good kid.”

Duckworth first heard of the program through East government teacher, Tisha Menchhofer-Grote. It was offered as a way to earn her required 15 hours of service for the class, and even though Duckworth has surpassed her required service hours, she still comes to Whiz Kids every week.

Menchhofer-Grote believes that Duckworth has proceeded with the program because of the hard work she displays in class and her stellar class attendance, proving herself as a good choice for the program and as a role model.

“Those who have a strong work ethic do well in Whiz Kids, and they continue on with their responsibilities,” says Menchhofer-Grote. “Those are the kinds of students that the Whiz Kids clientele needs—the good mentors, the responsible mentors, the role models.”

Duckworth’s mother, Cathy Duckworth, has also noticed the effects that Whiz Kids has had on Jenna. Cathy has noticed and her daughter’s growing confidence and how Jenna’s people skills have been improving.

“I am very proud that Jenna picked such a worthwhile cause,” says Cathy. “I feel that it has taught her more about being patient, understanding and giving.”

Fellow Whiz Kids tutor and East junior Kenzie Crowell has observed the relationship between Jenna and Stanley and can see their friendship playing a big factor in successfully getting their work done each week.

“They’re good pals,” says Crowell. “They enjoy each other, and he doesn’t want to get up and leave. He likes staying [at Whiz Kids].”

When their tutor cannot attend that week or drops from the program, the kids are usually saddened, says DuVal. Jenna has been attending Whiz Kids regularly and has been very reliable for Stanley.

“This has been an unusually rough year,” says DuVal. “Several [tutors] have moved or lost interest. We have asked some tutors each week to work with two children, but this is not ideal.”

Jenna understands why it’s important to stay in Whiz Kids and believes that it is essential for the kids to have someone tutoring them for the whole year. Any change to this could have a negative impact on Stanley or any of the other students.

“I think it’s important because some of the kids don’t have somebody in their life that they can view as a mentor or role model,” says Jenna. “A lot of the tutors I know are good people, and they’re intelligent, so if the kids have mentors like that, it will really help them.”