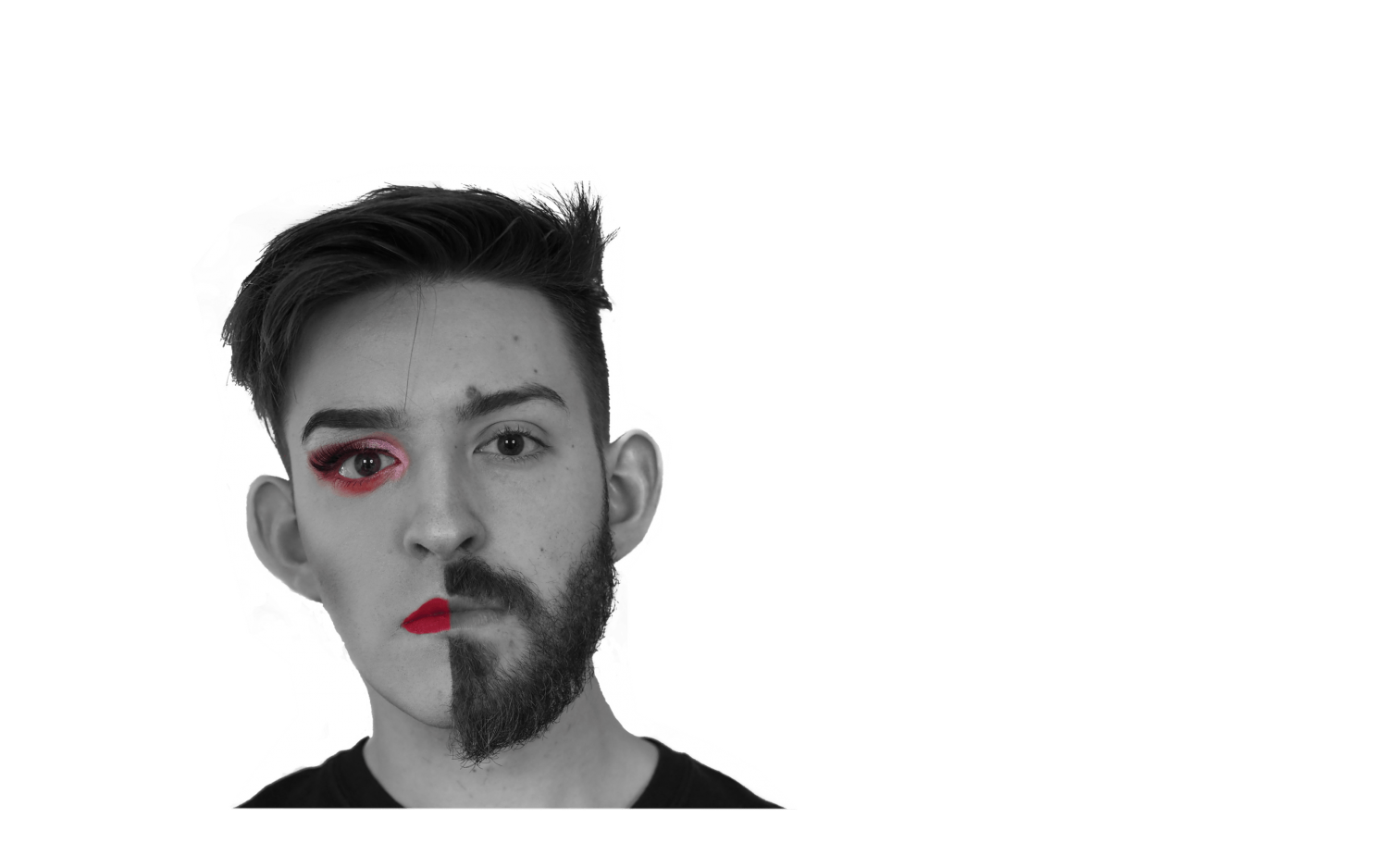 story and photography  by abby bammerlin | art by mckenna lewis

He lifts up his brush with the delicacy of an artist. His wrist flicks up as he applies the last bit of crimson red eye shadow. He looks in the mirror and snaps a picture. He has been transformed.

East junior Braden Mason has been experimenting with drag makeup designs since December of 2018. As Mason explains, drag refers to trying to imitate the opposite sex. He says that he started after seeing videos of drag makeup on Instagram.

“I would see people doing drag and how happy they were with themselves,” Mason says. “I kind of wanted to try it out because it looked fun.”

However, Mason knows that his art is not considered to be traditionally masculine. Mason, who is openly gay, had some anxiety about revealing his sexuality in middle school.

“[Middle school] is when I was first coming to terms with myself,” Mason says. “I was scared people would call me gay or whatever.”

According to an East survey of 117 male students, 32 percent of students say they have trouble expressing their emotions in front of peers.

In 2012, Changepoint partnered with East to create a customized Be The Difference (BTD) program to try to address emotional issues at East.

When discussing how to format the East’s program, Pagel explains that East wanted its program to emphasize responsibility.

“By the time [students are] in tenth grade, it’s not like we’re going to change a bunch of kids’ minds on a dime in one program, says Pagel, who has been working with Changepoint since 2010. “Instead, knowing that [students] learned empathy in previous programs, we decided to move more into allowing kids to own their actions in a very different way than it did previously.”

East Principal Suzanna Davis says that this emphasis on ownership is important for students to learn.

“Getting away from the one size fits all is really kind of what it boils down to,” Davis says. “To get as many diverse experience as possible within our school environment.”

Pagel says that the program has been expanded to other school districts around Lakota. However, East has discontinued this partnership with Changepoint.

Davis explains that BTD is being replaced with programs like MindPeace, a third-party organization that pairs schools with medical therapists, and Hope Squad, a group of students and faculty members helping prevent suicides through peer counseling.

“I think it’s critically important that students are owning their being: instructionally, social- emotionally, and socially,” Davis says

During the ID Project, Pagel says that the program coordinators will separate the boys from the girls and hold two different talks: be a man and be a woman. During these talks, Pagel says he tries to explain what it really means to be a man.

“We can empower young men to make decisions that are based on integrity, while also giving them the message that it’s okay to have feelings,” Pagel says. “It’s okay to cry. You don’t have to live in that place. But it’s okay to be there.”

University of South Florida psychology professor Jennifer Bosson has done research in social roles and stereotypes. She says that gender psychologists, like herself, define masculinity as any qualities or traits that are more strongly associated with men.

“It’s a kind of a tricky definition though, because it implies that the contents of what we think of as masculinity can change across cultures or time,” Bosson says. “Masculinity is whatever we all as a culture decide is associated with men.”

Hegemonic masculinity is a term used by psychologists such as University of Sydney professor Raewyn Connell. The term describes masculinities that vary across time, culture and the individual. Connel says to her, the term “toxic masculinity” refers to patterns of behaviour among men, or among certain men, that are socially disruptive.

“[The term toxic masculinity] seems to have come into widespread use in journalism in the United States (US) quite recently, as a result of public debates about sexual harassment in workplaces, the prevalence of an aggressive and abusive style in politics, and the persistence of racist and sexist violence,” Connell says.

Bosson says that the US is a contemporary society and tends to think of masculinity as being traits or qualities that has to do with assertiveness, confidence, dominance and suppressing emotions.

“We can empower young men to make decisions that are based on integrity, while also giving them the message that it’s okay to have feelings. It’s okay to cry. You don’t have to live in that place, but it’s okay to be there.” — Scott Pagel, Changepoint speaker

Sociology professor at Occidental College Lisa Wade explains that men are generally confined to what is considered masculine.

“We tend to value men and masculinity more than girls and femininity,” Wade says. “We tend to be more aggressive about making sure boys stick to masculinity.”

Mason feels that when men are around male peers, masculinity can start to become toxic. According to an East survey, 34 percent of the 86 men surveyed say they pressured to act more masculine around peers.

“Guys are just really scared of being themselves on the outside,” Mason says. “So [men] just try to repress all of it. They’re too scared of what other people feel about them.”

According to a report written by the American Psychological Association (APA) in Aug. 2018, “men who depart from this narrow masculine conception by any dimension of diversity (e.g., race, sexual orientation, gender identity, and gender expression) may find themselves negotiating between adopting dominant ideals that exclude them or being stereotyped or marginalized.”

East sophomore Zaiver Owens has felt the effects of being bullied because of how he dresses. Owens, who will often wear skinny jeans, explains that bullying started when he was in eighth grade and continued on into high school.

“I would dress a little differently and kids found that odd,” Owens says. “I got bullied a little bit for it. But it really got bad freshman year. Freshman year, I think is when the peak of it hit.”

Pagel says phrases and ideas like “men don’t cry” can be handed down colloquially or culturally, through media, as well as family members like brothers, fathers, and uncles.

“Parents interpret the same crying behavior differently,” Bosson says. “I think our tendency to view boys and girls as being emotionally different. Stereotypes start to influence [children] very early in life. From the moment [children are] born, they’re born into this world in which people are interpreting them in a certain way based on gender and that can subtly influence their experience.”

Wade agrees that children begin being gendered at a very young age, even before they are born.

“We tend to think that the girl infants are so sweet and the boy infants are so strong,” Wade says. “So the children are being treated differently, even before they themselves could conceive what gender is.”

“Girls start to kind of feel less proud about being girls and more embarrassed, and more worried about what it means for them and their life choices and their characteristics,” Wade says. “Whereas boys continue to stay proud of being boys rather than girls.”

The APA report titled ‘APA Guidelines for Psychological Practice with Boys and Men’ also found that some boys are socialized from an early age to avoid intimacy and deep connections with others, potentially leading to serious relational difficulties later in life.

Connell believes that violence and abusive behavior often has links to economic, institutional and racial inequalities. She uses the #MeToo movement as an example of women being vulnerable because they are economically dependent on powerful men for their livelihood or career prospects.

“Some patterns of violence are linked with cultural definitions of manhood – for instance physical confrontations in public places, or the way military forces have developed rhetorics of masculinity to keep their forces from breaking up,” Connell says.

Bosson says that today’s men have more choices than they have had in the past.

“Definitely a big difference between my generation and yours, is that boys are freer to reject masculinity all together,” Bosson says. “Whether it’s because they’re identifying as gay or they’re modern guy.”

Mason believes that the stigma, at least in high school, is getting better with time. He hasn’t experienced many negative reactions towards his make-up, besides the occasional glance his direction.

“I think society now is definitely more understanding with that type of stuff,” Mason says. “I feel like it just doesn’t make sense to make fun of someone for who they are.”