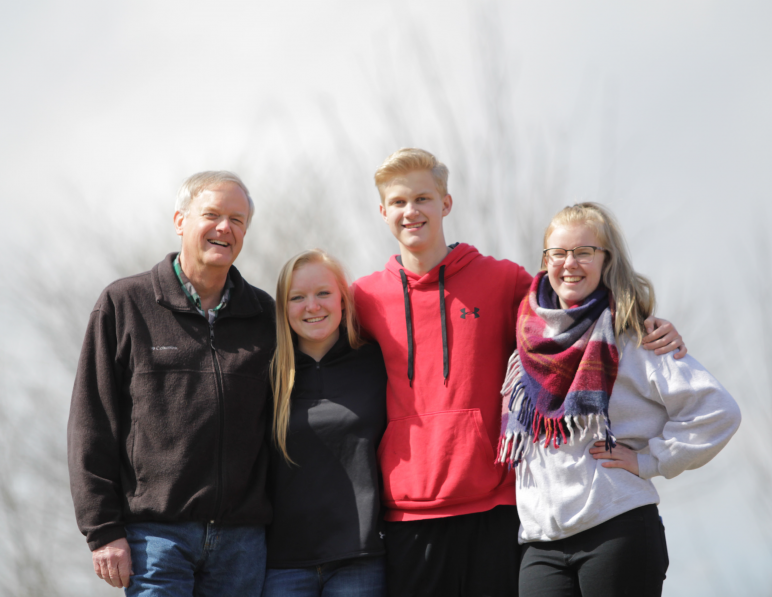 David, Katie, Stephen and Rebecca Addison pose for a picture at Fort Liberty.

Home on the Road

Her father made sure that his kids were going to spend their last summer in an extraordinary way.

From surfing the oceans and exploring the islands of Hawaii, to sledding with dogs in training, to seeing the beautiful glaciers of Alaska, and hiking through an eight-mile trail to LeConte Lodge in Tennessee, David Addison wants to pass his love for traveling down to his kids. Through the course of an unforgettable five-week trip, East sophomore Katie Addison and her family took a road trip to all the fifty states of the United States, making memories that will last them a lifetime.

“It’s pretty cool. I really like traveling,” Katie says. “My siblings and I definitely bonded a lot more than I see other people have bonded with their siblings. We will always joke around and talk about the experiences we had when we were kids. We’re all best friends.”

David has been a single father for 12 years, raising East sophomore twins Katie and Stephen Addison, as well as East graduate Rebecca Addison. David worked for Procter and Gamble in the purchasing department when he lost his wife to breast and pancreatic cancer.

“I worked for five years after my wife died, but trying to work and having sitters watch after [my kids] during the day [and] especially during business trips, became a little bit challenging,” David says. “But I tried to make sure there was always somebody here that I knew and trusted that could stay with my kids.”

After five years, David had the chance to take an early buy-out at work and decided to retire from his job. He did this so he could spend more time with his children as a stay at home dad.

There are many misconceptions in particular about single fathers. When it comes to mind, society usually depicts a female to play the role as a single parent.

“But at the same time, I think sometimes single dads do get that response of ‘Oh wow, you’re doing this all on your own’ because they don’t believe that they can, whereas single moms kind of don’t get that benefit of heroism.” —David Addison, single father of three

“But at the same time, I think sometimes single dads do get that response of ‘Oh wow, you’re doing this all on your own’ because they don’t believe that they can,” Luebbe says. “Whereas single moms kind of don’t get that benefit of heroism.”

David has dealt with the stigma of his single father parenting, recalling once in the past with a divorced woman at a singles group.

“I had mentioned to her about my three children. Her perspective was usually the moms have the kids all the time, and that the dads see them occasionally. She asked, ‘Do you get to see your children often?’ My answer was, ‘Yeah, I see them every day.’ Then she asked ‘Do they live nearby?’ I said, ‘Yes, right down the hall.’ She said, ‘Wow’ in response because she was thinking that I wasn’t involved as much with my kids.”

Shortly after David was widowed, he attended Companions on Journey, a widower support group, to connect and talk with others.

“It’s pretty good. Sometimes, you get some people that are very down and I tend to be more of an upbeat, happy person and that is sort of draining,” David says. “But, I found some people that I enjoyed talking to and sharing my ideas with.”

David incorporates the two attributes of discipline and nurture into raising his children, as he feels he has to play the role of both parents, essentially be a mom as well as dad.

“I think sometimes you have different parenting techniques, and often the father’s tend to be more of the disciplinary actions,” David says, “and the mothers are more the nurturing kind.”

According to Brown Leadership Consulting Counselor Michael Brown, fathers, in general, have a positive impact and help give children stability. A father can help instill discipline and cement their child’s identity. The child can feel secure and emotionally stable when the fatherly role is done well.

Katie used to be open about her mother’s death, but she realized as she got older it wasn’t socially acceptable to tell people in situations about her mother because it usually makes people uncomfortable. But if people keep pushing it, then she’ll have to say something.

“In one of my classes this year, my teacher asked me about my road trip this summer and if my mom or my dad drove during the trip or if they split it halfway. And I was like, ‘Oh no, my dad and my sister drove.’ He then asked if my mom doesn’t like driving, and I was like, ‘Yeah, not really, I guess.’ Then he asked if she went us with us, and I just [had to say], ‘She’s dead.’ And he was like, ‘I’m so sorry.’ And he wouldn’t look at me for the rest of us class because he felt so bad,” Katie says.

Katie really didn’t miss having a mother because she didn’t know what it was like until she started getting older and would talk to other girls and seeing the things they were doing with their mom such as doing crafts together or cooking.