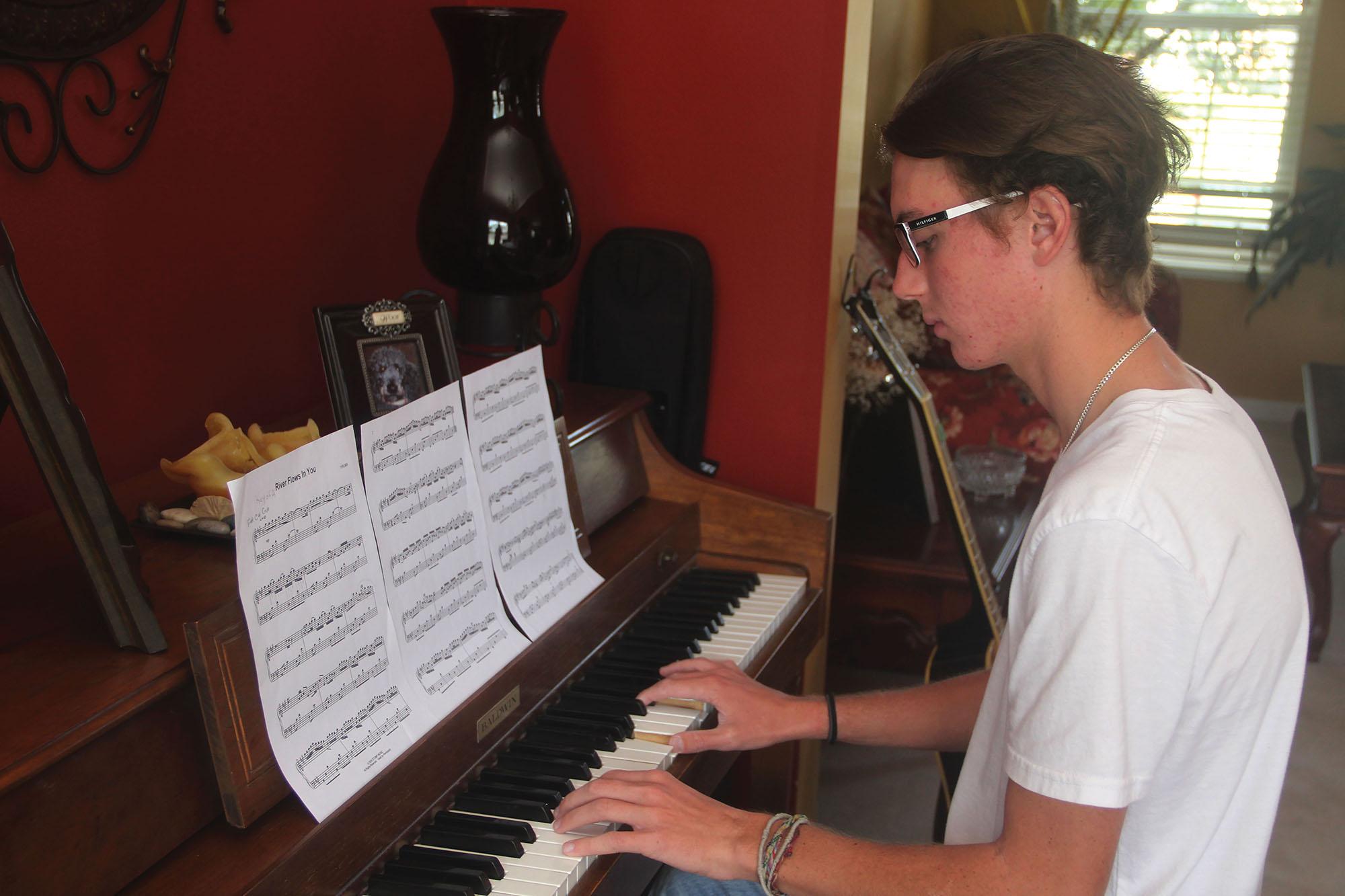 He sits down in front of the love of his life. As his hands slowly glide over the black and white keys, he drifts off into a world of his own—time is frozen. Tunes emerge out of the vibrating strings in the heart of the instrument that he has worked so tirelessly to master. Anyone could be watching East junior Tyler Englert when he is gracefully playing the piano, but who is watching doesn’t matter to him. Englert’s interests lie in his love and passion for the music that bring so many others joy.

Englert has played the piano since he was six years old. When he was little, his mother, Cari Englert, thought that he had really long fingers which would make it easier for him to play piano.

“That’s the first thing I thought of when I saw [Tyler’s] little hands,” says Cari. “I thought ‘oh his fingers are kinda long, he might be good at piano.’”

Cari’s mother, Ronnette Englert, who passed away seven years ago, loved to play the piano during the holidays and has inspired Englert to play ever since. Even when Tyler was little, he played with a violin at a wedding after watching the musicians play, showing interest from a young age.

“My mom played the piano for years, and she would play at Christmas time,” says Cari. “There was the influence of my family, and I just thought he would be good.”

Tyler’s talents don’t stop with the piano. He also taught himself through YouTube videos how to play the guitar, ukulele and drums. Tyler does not play in the school band or perform in any band concerts—he purely plays for the enjoyment of the music. On any day he comes home from school or golf feeling down or stressed, he plays the piano.

“[The piano] is important to me,” says Tyler. “If I’m sad or happy or mad, I just go and play the piano and it always helps.”

Tyler is always comfortable when he is playing the piano and has never been nervous. Even his sisters, Kelsey Englert and Lauren Englert, have Tyler learn songs on the piano so that they can sing when he plays it. His father, Joe Englert, loves listening to Tyler play the piano and constantly tries to display his talents to others when the opportunity presents itself, even if that means playing in front of strangers.

“We went to the J. Kyle Braid leadership program for athletes, and we stayed in a small town close to Chicago,” says Joe. “There was a piano next to a barber shop, and I said, ‘Tyler you should play.’ There was a lot of people around, and he started playing. Everyone around us was clapping, and it was a really special moment.”

Both of Tyler’s parents and his friends are very proud of his achievements in music. His best friend since second grade, Bryce Alexander, who lives right down the street from Tyler, can testify to knowing Tyler’s love for music.

“I have a piano at my house, and I don’t even play it,” says Alexander, who is a junior at East. “He uses it more than anyone in my house. Whenever he comes over, he’s playing a new song. I could literally hum every song he plays perfectly because he plays them so much.”

Feeling and loving music means something completely different to Tyler. He doesn’t get nervous, and he’s not in a band. He plays because it takes him away from the world, and he will always play for the enjoyment in the future.

“It makes me feel good that I can [play in front of people] because not a lot of people can do that kind of stuff, especially when it comes to playing instruments,” says Tyler. “I zone myself out from everyone else, I’m in my own world.”