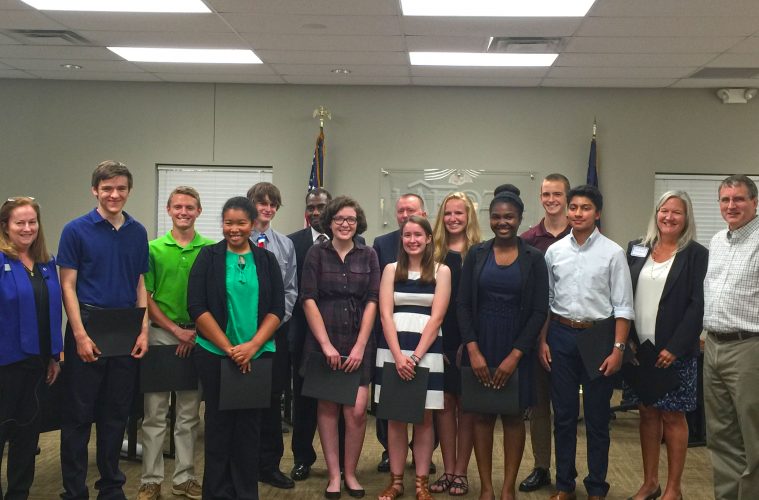 Lakota East and Lakota West seniors were recognized at the Sept. 26 Board of Education meeting for qualifying as National Merit Semi-Finalists.

By Julianne Ford | Photography used with permission by Amy Stiefel

Approximately 3.5 million students nationwide take the PSAT/NMSQT their junior year, and around 50,000 receive National Merit Commended, Semifinalist, Finalist and Scholar recognition, according to the Princeton Review. Semifinalist Chelsea Bass was happy to hear that her score qualified her for the program.

“I feel super blessed,” Bass said. “It’s an honor that out of hundreds of thousands of kids who took this test, I’m one of the [top three to four percent to be awarded].”

After students are announced as Semifinalists, they go on to fill out an application with the help of their counselors.

In past years, East has only had two to three Semifinalists, but the class of 2017 has nine. The East class of 2016 had two National Merit Scholars, Kaylee Rice and Christopher Pintaniello. East also has 18 National Merit Commended Scholars from the class of 2017.  According to the College Board, the PSAT/NMSQT was modified as of March 2016 so graders can have a clearer view of the student’s academic levels. East Principal Suzanna Davis does not believe the changes affected East students scores.

“It’s evolving; the PSAT constantly makes changes and tweaks to the test,” Davis said. “I still think we are higher than we have traditionally have been [in total Semifinalists].”

East Semifinalist Blake Dodson is proud of all of the work he put into preparing for the test and being named a Semifinalist was very rewarding to him.

“Being named a Semifinalist for the National Merit Scholarship gives me a way to repay the people who have invested so much in supporting and believing in me,” Dodson said. “Also, any financial cost I can eliminate from my future helps take some of the load off of my parents’ shoulders, and I see that as a similar repayment for all the faith and support they’ve had for me.”

Davis is pleased to hear about her students’ academic accomplishments through the PSAT.

“I’m so very proud and excited,” Davis said. “It shows a high level of commitment by these students to their education and academics.”