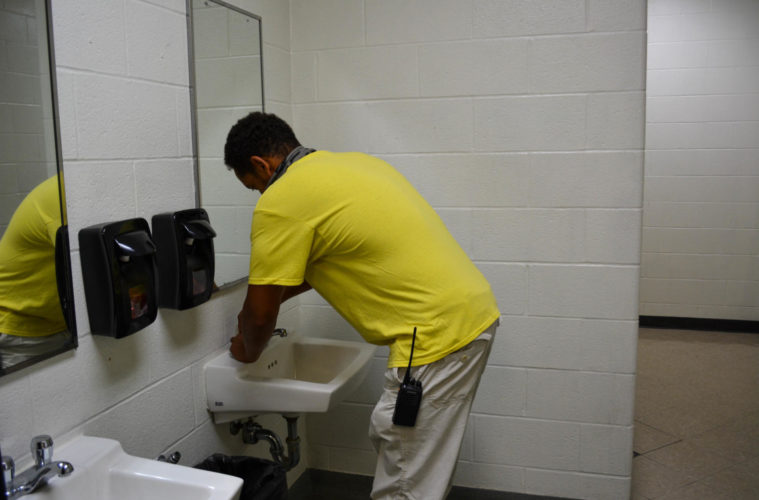 With paper towels strewn across the floor, hand soap smeared on walls, and faucets torn from sinks, Lakota East bathrooms fell victim to a TikTok trend titled ‘devious licks’ in September. East Head of Custodial Staff Josh Crouch felt its impact more than most as he dealt with the disrepair.

In September, Crouch reported that more than two-thirds of East’s 20 bathrooms had soap dispensers and bags, sink faucets, or trash cans stolen or vandalized. With the sudden lack of resources, students and staff became panicked.

“One girl came to me almost in tears and said ‘Mr. Josh, I’m just trying to wash my hands in the bathroom,’” Crouch told Spark. “For somebody to not be able to wash their hands in the middle of a pandemic is very bothersome to me.”

The nationwide trend began on Sept. 1, when Tik Tok user @jugg4elias posted a video of disposable masks they claimed to have stolen from school, captioned “a month into school… devious lick”. According to the website Know Your Meme, more than 94,200 similar or more severe videos have been posted under the hashtag #deviouslicks or #diabolicallicks.

According to East School Resource Officer (SRO) Deputy Doug Hale, students began stealing supplies from East less than a week after the video went viral. Despite his 27 years as an SRO at Lakota, Hale was shocked by the scope of influence social media has on the students.

“A lot of social media sites have been born for good stuff but there is always an idiot who has to take it the other direction,” Hale told Spark. “They don’t have to deal with [the consequences], and they don’t realize how it affects the people who do.”

The custodial staff felt the pressure as Crouch worked alongside East Maintenance Manager Roger Fields to repair bathrooms and take inventory of supplies. The endeavor put their regular tasks on hold as the team spent over ten hours tending to the bathrooms.

On top of additional labor costs, Lakota spent $1,200 to replace stolen property at East alone. According to Lakota Chief Operations Officer Chris Passarge, the trend has reached schools district-wide, with middle and highschools sustaining damage from students ages 13 through 18. Administration and staff were eager to put a stop to the pilfering due to the unruly behavior that has hurt the district’s budget along with its reputation. Despite the 142 cameras installed throughout the school, they were ineffective at narrowing down suspects as they only showed students entering and exiting restrooms from the hallway.

Crouch ditched his friendly disposition and turned solemn to deliver a cafeteria-wide speech concerning the crimes. He used his close relationship with the students to urge them to stop and come forward with any information they might have.

“I said ‘it’s probably the same kids that are high-fiving me and telling me how great I am that are destroying and stealing these dispensers,’” Crouch told Spark. “I can’t understand why disrupting property would make anybody feel better, but it is putting a big burden on myself and the staff that has to deal with it.”

Crouch’s cafeteria conversation had the intended effect as students fled to the office to make peer reports of other students’ participation. East Principal Robert Burnside and Hale took advantage of these reports as they worked to track down and discipline students.

While disciplinary actions varied based on the severity of each student’s offense, the school turned over information to the Butler County Sheriff Department to determine whether they will be pressed with charges.

Burnside noticed a halt in misdemeanors after Crouch’s lunchroom chat and the school’s disciplinary actions. Having had only one incident since, he is hopeful that the trend has died down.

“There has been more diligence on behalf of our students to say ‘we’ve had enough of this and we’re not going to let this continue to happen in our school,’” Burnside told Spark. “I think students realized it’s pretty frustrating to go to the restroom and not have a soap dispenser.”