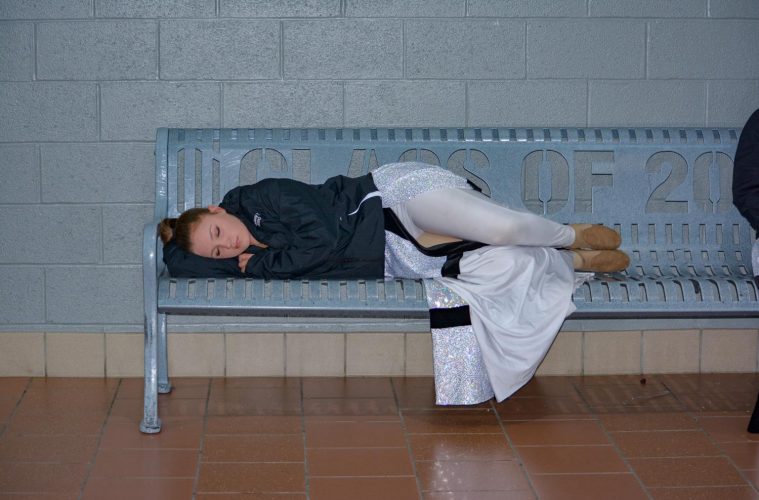 The Prep Before the March

I huddled around a speaker, waiting with bated breath alongside the rest of the marching band for the results of Grand National Prelims to be broadcasted from Lucas Oil Stadium in Indianapolis.

This is not where the 2018 marching band season started, though. It was a difficult path that started nearly five months prior to the end of July. Three weeks of band camp required a lot of sunscreens, gallons of water, and more than 2,821 packed lunches. It is not easy to be focused on one thing from 8:30 a.m to 5:30 p.m, while also facing the heat of the summer, but we were all working to create a show that we would be proud to perform.

With our show theme of “Line, Shape and Color” in mind, we began to learn drill, music, and movement. We spent the whole day learning the show, perfecting techniques, and bonding with other people in our sections.

After a long day of band, each section participated in a friendly competition to see who could come up with the best cheer. These cheers were skits mostly intended to let the band cool down after a long day, but they also fed into our competitive nature as we competed to be the owners of a pink lawn flamingo. While my section, the guard, never did well enough to be counted as a viable competitor, seeing all of the skits made the band a more cohesive group.

In band, there is no such thing as a week off, as we quickly dove into weekly sectionals and full band practices. The guard practiced every Monday night inside East’s upper gym or outside in the parking lot. We learned most of our work during these 2 ½ hour practices.

This year, we had more flag work than we have had in all the years since my freshman year. The tension in the guard could get high because it was 35 girls working together on something we were all passionate about, but overcoming these situations made us come closer together.

Our other weekly practices, with the full band, were on Wednesday and Thursday for three hours each. Here in these practices, we became a cohesive ensemble that people would want to watch. Each practice would start with a warm-up, usually to a song like “I’ll Make a Man out of You,” from Mulan. Then we would do some cardio and split up into sections to do musical and flag warm-ups.

Some of my favorite practices were when we were learning the drill. We wouldn’t do musical warm-ups and would jump straight into mapping out the show and learning our dots. It was the first time that any of us could get a feel of how the show was going to be.

We didn’t have much luck when it came to the home football games this year because of inopportune inclimate weather. Working up to the wire, the guard learned new work during the first half of a football game in a grass field outside of the stadium. This was not the most ideal situation because we were in our white dresses, but we did learn the work and still performed a good show during half-time. Third-quarter cookies after we performed made most of the experiences like these easier.

In Marching Band we perform at two different types of competitions. Three Bands of America (BOA) competitions, and two Ohio Music Education Association (OMEA) competitions. BOA is a national competition that is very competitive and hosts bands that have been internationally recognized. BOA competitions were first started in 1976, but East has only been competing for six years. OMEA is a competition for bands in Ohio and East has received a superior rating at the state level for 21 consecutive years.

BOA competitions are quite nerve-wracking because of the very skilled competition and to top it all off, the first competition of the season that we attended this year was the BOA Bowling Green Regional competition, which is 2 ½ hours away. We spent 22 hours straight in transit, practicing, and performing to receive a third place.

The first time this year we went to Lucas Oil Stadium was to perform for BOA Super Regionals. We faced a lot of struggles there due to weather. It was also the first time in Lakota history that we competed against our sister school, West. When we first arrived, it was very cold but we were all excited to be performing in such a large stadium. We grabbed our equipment and started to parade into the underground tunnel of Lucas Oil Stadium.

Our show includes 17 props, 10 feet tall by 8 feet wide field panels, that had to go down into the tunnel while 45 mph gusts of winds whipped around us. Once we struggled inside, we warmed up and then headed to line up in the tunnel before entering the field and performing for the crowd. At the end of the day, East moved on to finals to finish number 13 out of 71 bands with West supporting us from the stands as one Lakota.