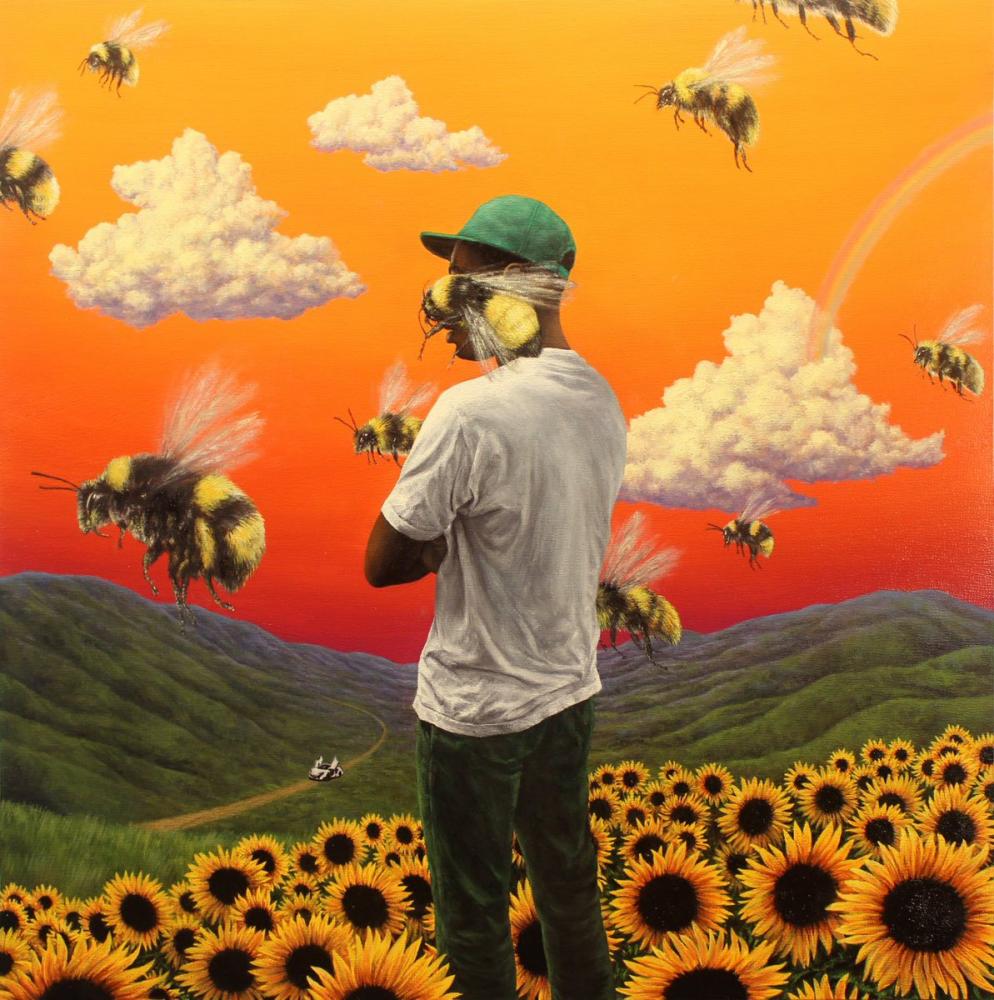 Flower Boy by Tyler, The Creator

By Kenna Lewis | Photography Fair Use

Tyler, The Creator’s fourth official album, Flower Boy, offers an introspective view of himself by using imagery to explain his sexuality. Tyler openly discusses his sexuality, more than he ever has on past albums, and gives fans an unshrouded view of himself.

The opening track “Foreword” predominantly features a guitar instrumental complimented by alternative singer Rex Orange County’s vocals. Tyler’s verses explain how his motivation is affected by his thoughts by using existential questions masked in imagery, “how much road can they pave, until I run out of land? How much land can it be until I run in the ocean?” The track serves as an appropriate intro by giving listeners a clear view of Tyler’s frame of mind.

A piano-led intro to the song “Where This Flower Blooms” is followed by vocals from Frank Ocean. This piece leads Tyler into his story of learning to become his own person and do what he wants to do, generally regarding his sexuality and presentation as a rapper. Tyler says, “Tell these black kids they can be who they are. Dye your hair blue, shit, I’ll do it too,” serving as an example to anyone going through similar experiences to be themselves.

Following the theme is a short track titled “See You Again.” The song features a repeating lyric sung by Tyler with a voiceover from Shane Powers, host of “The Shane Show” on Tyler’s media channel “Golf Media.” Powers is talking to a listener who is requesting a song and after a moment of silence, the listener requests “The one about me.”

“See You Again” serves as the song the listener was referring to. Tyler begins with lyrics about a love affair he had, seemingly with a male. Kali Uchis, a featured artist on Tyler’s last album, “Cherry Bomb,” appears on this track singing the chorus with Tyler. Uchis serves as a contrasting and feminine voice giving a “dreamy” feel to Tyler’s reminiscent lyrics of the relationship he once had.

The album takes an abrupt turn from the softer side to a hard hitting trap-style beat with “Who Dat Boy?” (feat. A$AP Rocky). This track is mostly just a “trap hit” but it still has some clever wordplay and references to Tyler’s life currently with the lyric, “Cons, overalls, and a striped shirt” referencing his exclusive collaboration with Converse.

Keeping the same sort of style, yet more toned down, Tyler continues with his familiar synths and creative beat in “Pothole.” This track notably features Jaden Smith, and tells the story of Tyler acquiring a new fancy car. The track uses the term “pothole” as a metaphor for the things that hold Tyler back in life temporarily.

Tyler directly addresses his sexuality once again in “Garden Shed” using the shed as a metaphor for the closet, translating it into his “Flower Boy” theme. Featured artist, Estelle’s lyrics, “Don’t kill the rose before it could bloom. Love every flower out the cocoon,” use the same imagery of flowers, and nature as metaphors for LGBT+ culture. The meaning behind this song specifically ties the topic of his sexuality, the “Flower Boy” metaphor, and the nature theme of the album all together.

The next track on the album, “Boredom” blends seamlessly with “Garden Shed” because of its tone, and its content while talking about a completely different topic. “Boredom” features a more extensive amount of features than other tracks on the album with Anna of the North, Corinne Bailey Rae, and Rex Orange County all making appearances in the background and forefront of the song.

Tyler addresses his feelings of being alone and bored in the times that he isn’t busy, wishing he had anything else but being bored with the verse “I need some food, I could order But I hate eating solo Need someone, we can loiter in parking lots and sunsets at the border.”

Next, “I Ain’t Got Time” contrasts the theme of “Boredom” with an energetic beat. The song takes some similarities from “Who Dat Boy?” but is constructed in a way that adds much more to the tone of the song. The intro to the song is a sample of Bel-Sha-Zaar’s “Introduction” and adds more substance and support than the repetitive composition of “Who Dat Boy?”

The most significant verses on the track, “Next line will have ‘em like ‘Woah’ I’ve been kissing white boys since 2004” give another statement to Tyler’s sexuality by noting that Tyler has been more or less out of the closet for a long time, explaining how he’s dropped hints at his sexuality for a long time without anyone noticing.

The next track, “911/Mr.Lonely,” takes the same tone as “Boredom.” “911/Mr.Lonely” has a large amount of features including artists from other songs on the album as well as new appearances of, Steve Lacy, Jasper, and ScHoolboy Q. The two-toned song starts out with a happier tone including lyrics about Tyler looking for people unlike the friends he talks about in “Boredom” that are here to stay.

The verses “I got a sold out show Crowd wild out hut don’t matter ‘cause you not front row” explain Tyler’s need for support from close friends being understandably more important than people he doesn’t know filling out a venue for him.

Skipping over the short track “Droppin’ Seeds” featuring Lil Wayne, “November” is one of the more introspective tracks on the album. The song explains the idea of going back to “November” is a simpler time, to contrast the pressing thoughts on Tyler’s mind about whether anything in his life is real. Tyler takes the time to consider where he’s going in the future on this track and entertains a number of possibilities.

The next track “Glitter” takes the end of “November,” where Tyler addresses a love interest that he has lost by attempting to call his number. The tone of the track is light with 80’s piano and guitar synths, xylophone, and a light clapping beat, and suggests a sort of daydream, or flash back of a past lover. The outro of the track snaps back to reality with a failed voicemail message tying “Glitter” and “November” together.

“Glitter” and “November” are the last tracks on the album with real substance, while the last track “Enjoy Right Now, Today” is slightly unnecessary, the fact that the instrumental leaves just the title to be pondered on gives a good ending that isn’t as abrupt as other albums may be. Any real verses on the song would just take away from the purpose.

While Tyler’s newest album has received much of it’s attention from the references to his sexuality, the album offers more than just what everybody else thinks of it. Tyler skillfully puts together the voices of many artists.

But combined with his musical style it has the ability to express more than any of his other albums before. In comparison to any of Tyler’s previous releases, Flower Boy explores Tyler’s mind and gives listeners an understanding of him as opposed to any fabrication that he put across past projects.

While Tyler used to get attention as an “edgy and offensive” rapper who created music for a very niche audience (anyone who could stomach the language), Tyler has grown in his style and delivered a more mature sound. Instead of having to wonder what Tyler meant with his lyrics, and who he was, its clear to see Tyler’s artistic and musical vision as a self described “Flower Boy”.