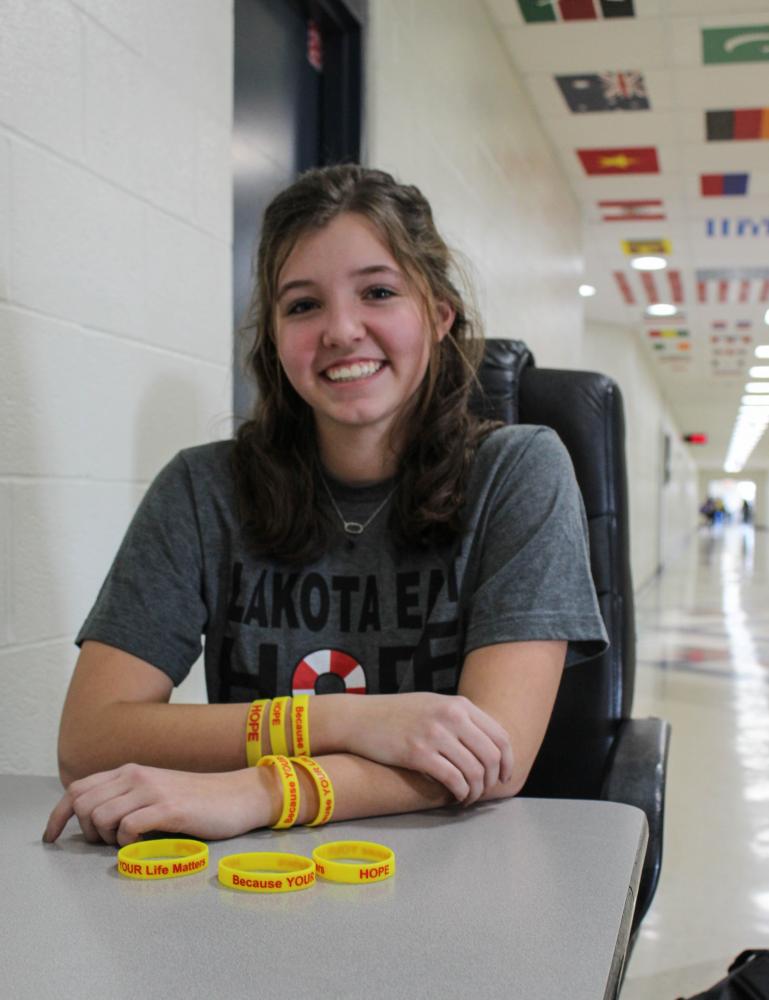 You Are My Sunshine

Ellie Leisten plops her books down on her desk and gets ready to begin her nightly math homework or binge on some netflix, but instead her mom beckons her to sit down at the kitchen table and chat.

For most teenagers this sounds like a nightmare, but for Hope Squad member and East senior Leisten, this is how she got the idea for one very impactful positivity project to execute through Hope Squad.

Leisten is a part of the Hope Squad, a “peer-to-peer suicide prevention program” implemented at Lakota East and West. Members of Hope Squad are nominated by the rest of the student body, and then trained to identify at-risk students, provide friendship and seek help from an adult or therapist if needed. One of Leisten’s favorite parts about being in the group is the people.

“They’re really amazing people, and [are] very passionate about what we do,” Leisten says. “It’s so cool to see all these students, from completely different walks of the earth and of the school, uniting and trying to help others.”

East social studies and psychology teacher and Hope Squad advisor Justin Dennis has noticed that students like Leisten in Hope Squad have helped the student body open up about what they’re dealing with.

“Through the research behind Hope Squad, [it is proven] that a lot of [struggling] students are more willing to speak to other students,” Dennis says. “[Our work is] about spreading a network where there’s more kids to be supportive of other kids.”

Leisten knows that other students of East can be oblivious to most of the work Hope Squad does. In fact, more of the work is behind the scenes than students may expect. In this way Hope Squad members try to respect the privacy of the students they help.

“If we help somebody in a really desperate way we don’t go around announcing it to the school. It’s something that we try and keep to ourselves,” Leisten says.

Some specific behind the scenes work all Hope Squad members have to go through is training, so they are equipped to deal with any kind of situation. Every month of the school year, Hope Squad program advisors are given a detailed curriculum that guides the education and training of their student representatives.

“When we started, we had QPR training which stands for question, persuade, refer,” Leisten says. “That [training] talks about how to see warning signs, deal with [the problem], and get our peers the help that they need.”

Although Leisten tries her best in the positivity realm, Hope Squad members are not allowed to do the counseling for the students they aid. MindPeace is a mental health agency that provides licensed therapists from partner organizations who have offices at Lakota schools and are available for consultation during the school day and after school hours.

Lori Brown, Lakota Director of Student Services works with MindPeace to get youth the help they need. According to Brown, 41% of the people in the United States who had a mental disorder in the past year received professional health care or other services. Part of Hope Squad’s mission is to eliminate the taboo around mental health conversations.

“The main goals of any support around mental health is to increase awareness and access to care. Both MindPeace partner placement and Hope Squad have tremendously helped to do both of those,” Brown says. “Ironically, the rise in need is showing us that the stigma around mental health is decreasing, and people are open and willing to access care.”

Leisten also takes part in some of the not-so-behind-the-scenes work the group does in order to brighten the days of the faculty and student body.

“We do Hope Week, [or we] spontaneously go give out mints,” Leisten says.. “I would say that helps people who haven’t stepped forward yet. [It could] make their day a little bit better. Sometimes that’s all you need, an act of kindness to get you through the week.”

Dennis has seen the impact Leisten has on the people around her through these group projects, and according to him, her personality can change lives.

The work Leisten does isn’t always fun and games, as 43.8% of 211 East students surveyed say they have struggled with anxiety or depression, making it a significant problem that Hope Squad is trying to combat. Shortly after Hope Squad’s official training had begun for the 2019-2020 school year, Leisten had her first real encounter of helping someone.

“A friend from tennis camp told me he was having suicidal thoughts; I felt completely unprepared for the situation. However I knew I was chosen to be in Hope Squad for a reason and they would have my back,” Leisten tells Spark. “We agreed that we would find him some help together.”

Leisten believes mental health is a significant battle among high school students, and is hopeful that she can continue to make a difference through Hope Squad.

“It’s a pretty big issue, especially now with social media and peer pressure. Sometimes we don’t have people that we can trust; some people don’t have great relationships with their parents or don’t have a teacher that they can comfortably go talk to,” Leisten says. “I think it’s nice that there’s a group of supportive students your age, actually going through what you’re going through.”

Providing a safe place for students to come and get help with anything they need is something Hope Squad does frequently, and Leisten has seen first hand multiple times and in a variety of extremities.

“Sometimes somebody will walk into our room and ask if there’s somebody they can talk to because they’re having a bad day,” Leisten says.. “And sometimes it’s a little more serious. Someone will reach out and say hey, I really need help right now, I’m going through a really tough time and that’s when our training kicks in.”

Leisten may not realize how her hard work shines bright to others, but East English teacher Erin Schneider, one of many Hope Squad advisors has noticed the beacon of positivity Leisten brings to the school.

“Ellie seizes every opportunity to brighten someone’s day, though I’m not even sure she’s conscious of that,” Schneider says. “It’s simply who she is.”

Dennis equally sees Ellie in this light, as he had her in class and now gets to watch the work she does in Hope Squad.

“If there is a definition of positive, she is it. She’s almost too positive to believe,” Dennis says. “She can light up a room, she can change how people feel about themselves instantaneously. That’s a gift.”

According to Brown, half of all mental health disorders begin by the time a person turns 14. During her time in Hope Squad, Leisten’s eyes have been opened to the need for rays of sunshine among cries for help from teens struggling with mental health.

“I lived under a rock or [in] a bubble before I was in Hope Squad,” Leisten says. “I didn’t see the things that were going on in people’s lives because [they] put up a wall and don’t let people in and hide that part of [themselves] from everyone; the happiest people can be struggling the most.”

Last year, Leisten’s kindness took on the form of sunflowers. Students could buy the flowers for a few dollars at lunch to be sent to someone of their choosing. She wanted to use the sunflowers to spread positivity throughout the school.

“People could buy flowers to send to someone, along with a simple message: you are my sunshine,” Schneider says. “As cliché as it sounds, little things really do mean a lot. Small gestures of kindness enable meaningful connections, and Ellie embodies that mentality.”