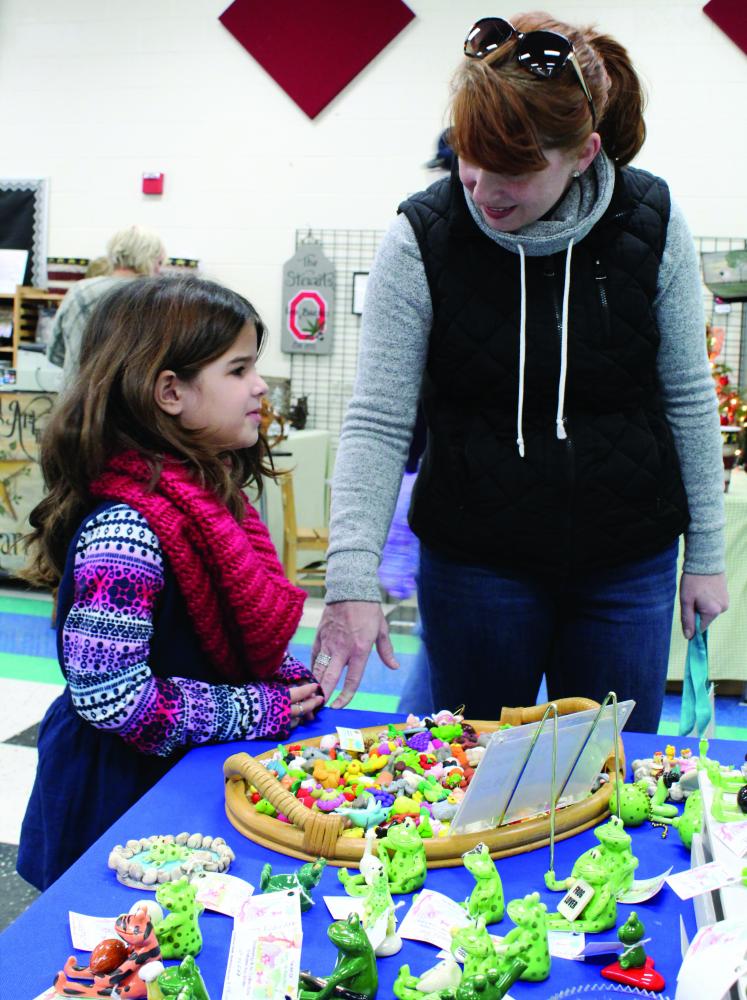 The Crafts Are Back

story and photography by cassandra mueller

As community members walk into East, they are greeted by an overabundance of people and booths crammed into every possible space in the main hallway. To the left of the cafeteria doors, booth 221 crafter Kate Nolen makes holiday wreaths by weaving burlap in and out of a stencil. Across from her are booths selling American Girl Doll clothing and jewelry made out of kitchen utensils.

The aroma of goodies and the sights of potential presents for loved ones urge enthusiastic community members down the East hallway during the East Craft Show. Every year, just in time for the holidays, crafters come from around the community to gather at East and sell their creations to anxious buyers.

The annual craft fair is presented by the East Parent-Teacher-Student Organization (PTSO) as a fundraiser to be able to pay for everything they provide East students. According to East Craft Show Co-Chairperson Rita Gayer, the PTSO made $53,000 from admissions, booth rentals, and concessions this year.

“[The money] goes towards special requests from teachers, scholarships, student activities, after prom, [etc.],” Gayer said. “It all goes back to the students in one way or another.”

Crafters have to pay an $85 fee to secure a booth and $180 fee to snag a booth in a locker bay. There is also another charge if crafters want a booth in the corner or one with access to electricity.

“We take about a month off after the craft show, then in mid-December it all starts again,” Gayer said. “I send out the contracts to the returning crafters and put out the application for new crafters, so it’s constantly going.”

Behind the scenes, Gayer receives all of the new applications from crafters vying for the 15 open spots out of the 250 total booths, but the show has a lot of loyal crafters, so not much room is left for newcomers. Gayer received 120 applications this year, having to cut 105 of the hopeful crafters.

“I’ve been here about 14 years,” crafter Cindy Kittle said. “With all the school’s help with unloading and loading and the promoters, they have done such a great job.”

Kittle makes jewelry out of 14 karat gold and silver, using the technique of “wire wrapping.” She makes all of her jewelry by hand and one piece can take her up to eight hours.

“I’ve been doing this for 25 years,” Kittle said. “One eccentric peace can take me up to eight hours.”

The East Craft Show is a juried show, meaning several PTSO craft show committee members look over pictures of the craft in question and decide whether the item will make an appearance in that year’s show. To be able to make it into the craft show, the item the crafter is selling has to be made using more than three steps, which is only one of the many rules set in place for each crafter.

Because of the record-breaking attendance, more crafters began to sell out of their items, some even having to go home after the first night to produce enough to sell the next day.

“One crafter [who] makes peanut brittle, had to go home and make more,” Lohman said. “She had only ever sold 150 boxes, [this year] she brought 180 boxes [and] she had to go make more for the second day.”

Some crafters make their item as a hobby, while some do it as a full-time job. Each crafter has a different reason for creating their item.

Crafter Janice Hester, whose craft is pictured above, molds clay sculptures, mostly of frogs. It is her full-time job which grew from her personal experiences growing up.

“My mom and I had a little house down on the lake and we saw frogs all the time,” said Hester, who has been creating for 40 years. “We got into clay and we started making [sculptures of them].”

Year after year, crafters flock to East to sell their items and watch people enjoy their crafts. It has an impeccable reputation among crafters Kittle said.

“I heard about the craft show through word of mouth,” Kittle said. “I was always told [by other crafters] that East was one of the finest [craft shows], and it is.”