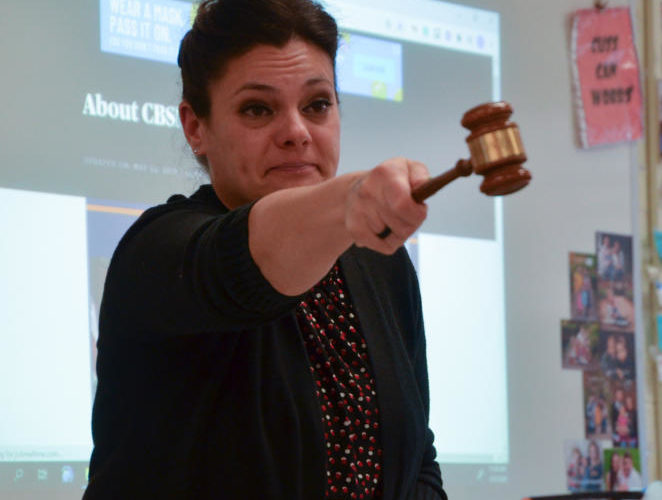 Through her teaching, East Government teacher Tisha Grote-Menchhoffer encourages her students to become civically engaged beyond the classroom while building a positive environment that motivates them to believe in the power of their unique potential.

Growing up, Tisha Grote-Menchhoffer (Mench) was always surrounded by politics. Her friends and family had graduated at the top of their classes from the most prestigious law and business schools. Although this environment inspired her love for political science, the high-achieving atmosphere made her begin to doubt her own capabilities.

As much as she wanted to go to law school, she didn’t believe that she was smart enough. Now, as an educator teaching the subject that she adores, Mench hopes to encourage her students to believe in their potential.

In college, Mench studied Secondary Education in Social Studies with double minors in Political Science and History at Miami University and obtained her master’s degree in Educational Administration from Xavier University. She then earned a PhD in Educational Leadership from Miami. She has been teaching US and Advanced Placement (AP) Government for 20 years.

Mench says she tries to share her passion for political science and civic engagement with everyone who walks through her classroom door. For example, she has voter registration forms readily available to students on the bulletin board outside her classroom.

“I want my students to know that they can change what they see as an injustice. There’s so many resources that are pumped into trying to get 18 to 25 year olds to vote, but it’s not working,” Mench told Spark. “[Young people] have to vote and get people in office who represent them and their issues.”

Mench encourages students to further their political understanding through opportunities offered by the local American Legion Post 681. These opportunities include Girls and Boys State, programs that allow students to experience government in-action and the Americanism Test, an exam that tests students on their knowledge of citizenship and policy.

For East senior and 2019 winner of the five-day Americanism Test Trip to Washington DC Jasmine Washburn, these opportunities allowed her to use her political interests to form her own opinions about the US government system. Washburn received the Golato Award for a 100% on the Americanism test; she is the first Ohioan to receive this award in 12 years.

“Mench is genuinely passionate about the subject she teaches; it’s not just a job to her, and I really admire that,” the former Mench student says. “If I hadn’t taken Mench’s AP Government class, I probably wouldn’t have taken the test and won. The trip really helped me form my own beliefs and opinions, and understand how to advocate for them.”

American Legion Chairperson Jerry Nelson says Mench’s support of Post 681 and commitment to producing “informed and engaged students” motivated him to nominate her for the American Legion Educator of the Year Award.

“Lakota East students have won the Americanism Trip consecutively for the past five years, and Mench’s classrooms have provided approximately 90 delegates for Girls and Boys State,” Nelson says. “Her goal is not just to see her students pass a test. She encourages them to think deeply about government and politics, and I think the award is uniquely suited for her.”

The Legion Department recently declared Mench the Ohio state Educator of the Year.

“I think education in the US would be better if we had more teachers like Mench,” Nelson told Spark. “She is truly someone that her students can rely on. Post 681 now has over 200 members, and they all share in my pride of what we do in the community, and it all really started with Mench.”

According to the Ohio Director for the Campus Election Engagement Project, a nonpartisan organization that strives to increase voter turnout among college students, and 2007 East graduate Nate Hall, Mench was the inspiration behind his decision to pursue a career in politics.

“If I hadn’t taken Mench’s classes, I’d never have considered a career in politics. She sparked that interest in me that led from running for office, to working on and managing campaigns,” Hall told Spark. “Now I work coaching college students on campuses across the state how to organize their peers to vote and engage in the political process. All of that because Mench taught me how one person can make change in our system.”

Mench hopes to empower her students to take control of their own futures.

“My dad told me that I didn’t need to go to college, that I was never going to get good grades, that I wasn’t going to do well. And I decided that I would go to college and that I’d reach the highest degree that I could,” Mench says. “I need my students to know that they can do it.”