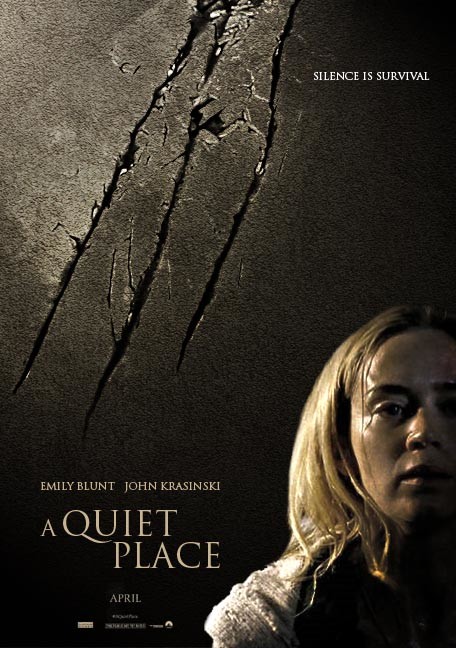 Silence speaks louder than words. In the movie “A Quiet Place,” Director John Krasinski allows the silence to stretch on for what seems like forever—but that is what makes the film such a unique and exceptional piece of cinematography. The movie stars Millicent Simmonds from the 2017 drama film “Wonderstruck,” Noah Jupe from the award-winning film “Wonder,” Emily Blunt from the book-to-movie adaption of “The Devil Wears Prada,” and John Krasinski from the TV comedy series “The Office.”

I came into the Cobb Liberty Luxury Theater expecting to see just another horror movie. I hoped to get a creepy backstory, a few jump scares, and walk out of the theater slightly paranoid of what was lurking in the shadows. Trust me, I experienced all of that, but I also encountered something a bit more profound.

The movie begins in a post-apocalyptic world where blind, violent monsters accidentally created by the government roam the Earth. In order to survive, a family must remain silent at all times. This family consists of protective father Lee Abbott, pregnant wife Evelyn, their rebellious, deaf daughter Regan, their inquisitive son Marcus, and Beau, who is Lee and Evelyn’s youngest child. Within the first half-hour of watching, a member of the Abbott family is snatched away by one of the creatures never to be seen again. Where as most horror movies would drag it out for half of the movie, Krasinski, not afraid to take risks, makes the slaughter less than a second.

Included in those risks was the choice to have the main characters communicate using mostly sign language instead of words. But don’t worry there are subtitles. The limited verbal dialogue enhances the psychological turmoil, which only increases the audience’s paranoia and sympathy for the characters. When a monster slowly creeps up behind an unaware Regan, I swear the whole theater collectively stopped moving. Everyone stopped breathing. The anxiety was so suffocating I was afraid to stress-eat my popcorn.

Because the characters rarely ever speak, the words they do say hold a lot more weight and importance. When Lee takes Marcus to a waterfall, so that the monsters can’t hear their heart-to-heart, the audience listens in. Viewers pay attention to what they say to each other because it could very well be the last time. The thing is, I didn’t want more words. I didn’t want to experience more plot. I didn’t want more time. All of that was perfect.

Although once I finished watching, I found myself wanting more of the backstory. Even though the film does a time lapse to let the audience see into specific moments in the characters’ lives after the apocalypse, I was still left with unanswered questions.

Despite all of this, I think not knowing why all of it happened just made the film all the more frightening. Also the fact that the movie takes place in the year 2020, which is just around the corner, makes me want to find out if Krasinski is foreseeing future events!

But the true element that drives the horrific plot is that it’s really not about scary monsters and the world ending. It’s about family. It’s about the lengths people will go to protect the ones they love—no matter the cost. Imagine what it would be like to constantly be on the run, watching your back, hoping the person you care about isn’t taken away. Meanwhile, you know that you’re running out of time. In reality, we are always running out of time, even though none of us are being chased by government experiments (that we know of). So slow down, and tell the people you love that you love them while you still can.