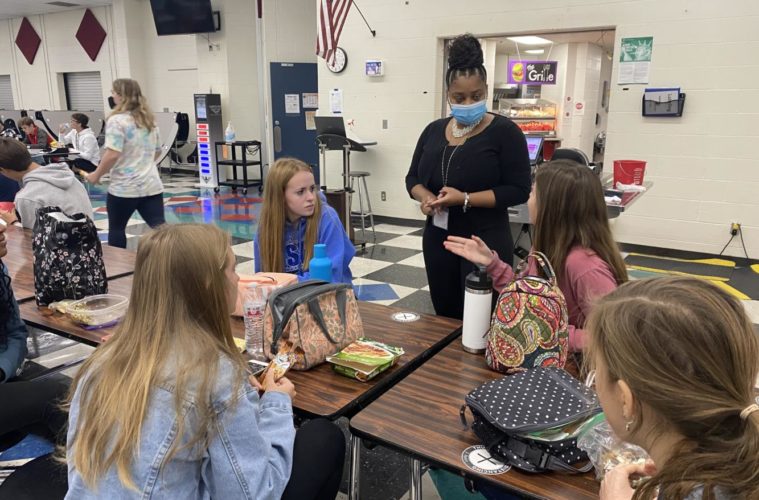 On May 5, Dr. Yejide Mack was placed on a leave of absence after serving as East’s principal for nine months. Before East, she served as assistant principal at Sycamore High School from 2014-2020. East students and parents were informed of this change in an email from Superintendent Matt Miller that afternoon. Teachers were informed during a meeting held after the school day with Miller and members of the East Administration team.

Teachers received an email that day from Miller stating there would be a meeting in the cafeteria immediately after school at 2:50 p.m.

“We don’t get emails like that, so of course we took that seriously,” an East teacher, who wishes to remain anonymous, said. “I know it’s a new developing thing, but what exactly is the issue? Rumors are flying everywhere, and I don’t really understand it.”

Multiple teachers feel this way but were not willing to publicly comment on this story.

“Paid administrative leave means that an employee does not perform his or her job duties while inquiries are being made into his or her job performance,” Director of School and Community Relations Betsy Fuller related to Spark. “During this time, the employee continues to be paid.” The investigation deals with procedural issues not criminal issues.

The role of principal has not been filled at this time, but East’s administrative team including Assistant Principals Matt MacFarlane and Dennis Smith, Assistant Principal and Athletic Director Richard Bryant, and High School Building Coordinator Richard Haynes will share the responsibilities through the final two weeks of the 2020-21 school year. Assistant Director of Curriculum Deana Moss will aid in the transition alongside the Central Office team, according to the email from Miller.

“While I understand that there may be questions, we are not at liberty to discuss details related to this matter,” Miller said in the email. “I have the utmost confidence that the administrative team can handle this unexpected change.”

Dr. Mack is prohibited from having contact with staff or students, along with being banned from district property and school events. End-of-the-year events will no longer be led by Dr. Mack; National Honor Society (NHS) Induction was led by Miller, while both graduations will be led by Bryant.

In an interview with WLWT News 5, Dr. Mack explained she’s an educator “who leads strictly with students in mind,” and she is unsure about the reasoning for her being placed on leave.

Because the district is not revealing information about the cause of the leave of absence, a student explained rumors are running rampant. Students want to know why Dr. Mack was placed on leave, especially with a mere two weeks left of the school year.

Last month, East seniors who ordered white caps and gowns received black caps and gowns, causing an uproar. The email from Dr. Mack said the change was to “exemplify Thunderhawk Pride.”  The situation has now been resolved by the superintendent, and female students received white gowns, per tradition. According to a source at the faculty meeting, Miller said that this was not the reason for the decision; that it was a personnel decision that included more factors.

Dr. Mack’s attorney, Kelly Mulloy Myers, told Spark that Dr. Mack has navigated this year as a first-year principal with success during these unprecedented times. Her 18 years within education has left her as a dedicated and talented principal, according to Myers.

“Dr. Mack is respected and well-liked by students, teachers, and staff,” Myers said. “There is no legitimate basis for placing Dr. Mack on a leave of absence. We look forward to a full investigation and prompt resolution.”