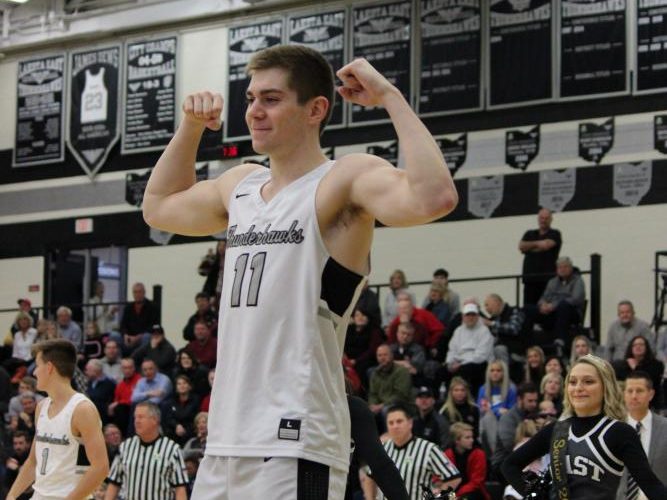 Back With a Bang

Against Hamilton in January, the game was neck and neck as East had struggled to score in a defensive battle. As the clock ticked down towards zero in the fourth quarter, starting center Alex Mangold, in his #11 home white uniform, hit the game-winning shot thanks to a Nate Johnson assist.  The buzzer beater brought the Hawks a hard-fought win at 34-32, Mangold contributed an impressive 19 points and 12 rebounds for the Hawks that night.

A towering 6 foot, 8 inch senior, Alex Mangold always puts the team before himself. He knew he had to step up and display his leadership during the Hamilton game, as it was a tough one.

“Nothing is guaranteed on the court with the potential for injuries,” Mangold says. “I don’t take anything for granted and I strive to do my best every game.”

Mangold displays leadership on and off the court, especially after fighting through the adversity of his broken leg he faced during his junior season.

“He’s showing that he’s coming back from a tragic situation and has made the best of it,” Varsity Coach Clint Adkins says. “He shows his leadership through his daily work ethic and practicing harder than he ever has.”

Mangold also led the Thunderhawks to victory in the season opener against Taft, as he tallied a double double with 15 points and 11 rebounds.

Adkins has seen Mangold as a player from his freshman year call-up to varsity, to now serving as a senior team captain.

“He’s a guy that cares about winning first rather than his individual stats,” says Adkins. “He’s a really good teammate.”

Mangold’s selflessness and leadership have helped the varsity squad immensely this season; their record currently stands at an impressive 24-2 as they sit in first place in the GMC.

“When you have a senior leader who cares about team wins and the team over himself,” Adkins says. “Usually, good things happen.”

As the District finals game against Beavercreek was approaching the Thunderhawks prepared in a way to receive that trophy. With 1.6 seconds remaining in the fourth, Mangold shot the two game winning free throws bringing the Thunderhawks a victory of 33-32.

Proceeding this game, the Thunderhawks faced La Salle in the Sweet Sixteen game at Cintas Center on March 11.  East was trailing 10 points behind as the second quarter had less than three minutes on the clock.

“If we get down a bit, we can’t be scared,” Mangold says. “ A big part of our culture is playing connected, all five guys on the court having each other’s backs”.

With seconds remaining in the fourth, the Thunderhawks brought home another victory of 44-35 making East’s history as they advanced to the Elite 8 for the first time in school history.

“We had to keep running our motion, keep doing what we were doing and don’t have fear,” Mangold says. “ We played out of our comfort zone a little bit and it was for the best”.

Others say Mangold also displays amazing maturity and character on and off the court.

“He is always mature, in every situation, on and off the court,” Sophomore Charlie Kenrich says. “He’s a really good leader too.“

Mangold will leave a strong legacy here at Lakota East when he graduates this year. He received a full scholarship to a private college in Fort Lauderdale, Florida at Nova Southeastern University, where he will continue his basketball career and major in Business.

“Everyone on the team is like a brother [to me],” Varsity Captain Mark Krajewski says. “I see these guys more than my parents most days, and it’s just a bond that’s special, that’s why I love basketball.”

Krajewski notes Mangold’s resilience and the effect this injury has had on him, how he plays every play like it’s his last play.  Mangold reflected on his injury against Oak Hills last year:

In his junior season, as Mangold headed for the basket in the game’s second possession, he tried to shoot. As he proceeded, his leg got caught and wedged between two Oak Hill defenders and – as Mangold says – “it just gave out”.  He says he heard a loud “pop” and he knew it was bad.

“I heard the pop, and all my teammates were looking at my leg, even the cheerleaders looked at it.  My leg was disgusting,” says Mangold. “I had to keep my composure as they pulled my leg out and pushed it back in place so the blood flow and muscles would not get messed up.”

One of the hardest parts of the injury was knowing that Mangold wouldn’t be able to play with the Seniors on the team again: he had played varsity since the end of his Freshman year. His best friends on the team were always the upperclassmen. He remembers the emotion of watching the last game of last year sitting in a wheelchair as East beat Oak Hills by 20.

“Nothing is promised, and in the blink of an eye, things can be extremely different,” Krajewski says. “That being said, Mangold pulls the best out of everyone around him.”