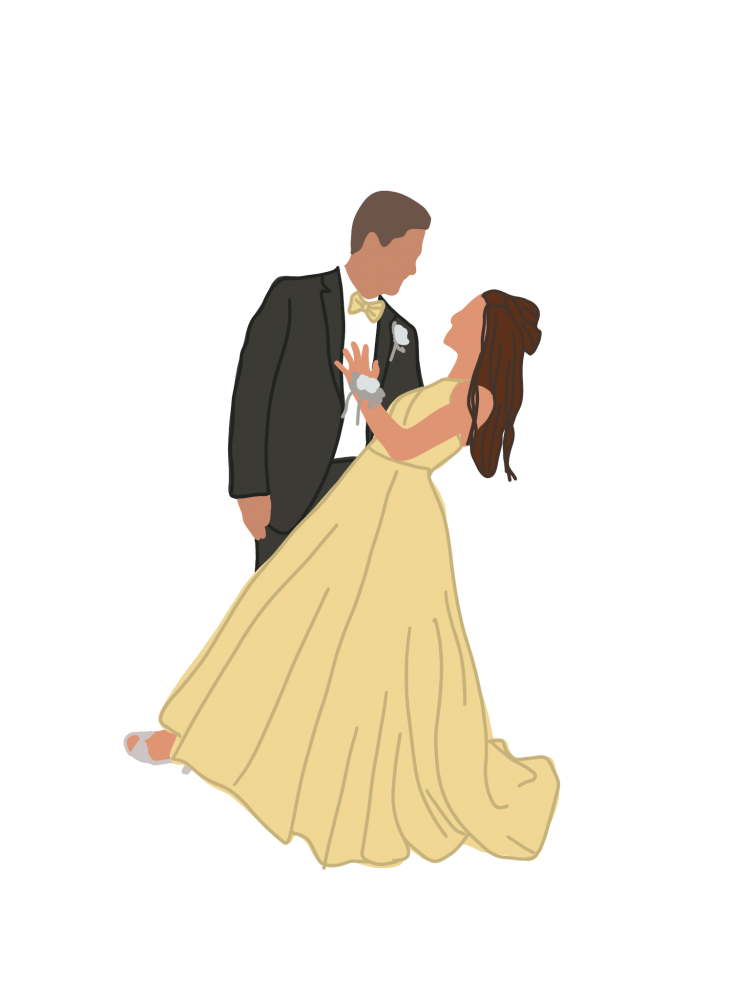 story and art by Rachel Anderson

The invitations were printed. The t-shirts were made. The posters were decorated. The spirit week was finalized. The decorations were ordered, the venue was mapped out. The only thing left to do to make the East 2020 prom perfect was to sell the tickets.

However, on April 23, 2020 prom was canceled due to Ohio Gov. Mike DeWine’s order for all schools to continue remote learning through the end of the school year.

This year’s prom theme had been the Roaring 2020’s: The Golden Gala. It was originally scheduled for April 18 at the Sharonville Convention Center.

On March 12, 2020 DeWine extended all Ohio school’s spring breaks to three weeks due to the outbreak of the coronavirus. Lakota’s spring break was scheduled for March 14 through March 22, but according to the original order, students wouldn’t go back to school until April 6.

After the scheduled spring break, Lakota began remote learning. On March 30, DeWine extended school closures until May 1, 2020 and kept the social gathering limit to 10 people. At this time, East decided to postpone prom until May 16.

“I was happy because it hadn’t been canceled,” East senior and prom committee member Andrea Davis told Spark. “It is senior prom and you only get one senior prom. It is also the last dance [seniors] could ever have.”

When DeWine announced that no schools should meet for the remainder of the school year on April 23, 2020, he extended the social gatherings limit of 10 people until the end of May. Because of this, the Sharonville convention center had to cancel all of their events, leaving East no choice but to cancel their prom.

“It breaks my heart to cancel. Our prom committee put so much work into this event, but having large group gatherings at this time is not safe,” East prom committee advisor Susanne Linder told Spark. “However, if [the Sharonville Convention Center] did not cancel, we still would have to reschedule for the safety of our students. Last year, we had 1,100 students attend prom.”

The East prom committee had been meeting almost every Monday after school since October.

“We picked out decorations and planned how we would decorate and set up. All the invitations were counted and handed out to extra help [classes]. We met with the DJ for songs and set up,” Davis said. “There was a lot of planning that went into prom over the entire school year.”

According to Linder, the decorations, such as the cardboard silhouettes used to decorate the entrance, had already been purchased. However, most of the decorations can be used for next year’s prom. The flowers for the centerpieces had not yet been purchased, so East did not lose any money.

“All the contracts and deposits were returned to the account,” Linder said. “The purchases made from the account will be re-purposed in new ways, so no money was lost.”

The cancelation of prom has not only impacted juniors and seniors around the country, but also business owners, such as formal wear shops, nail salons, restaurants, flower shops, shoe stores, cosmetic shops, and hair salons.

Kelly Grubb, who works at Salon Lofts VOA, sees the impact prom cancelations have on not only her business, but the U.S. economy as well. While Grubb does not specialize in styling hair for formal occasions, she still styles around 20 girls’ hair per prom season.

“My business being closed down has meant no unnecessary spending, no eating out, no business supply store runs, [and] canceling monthly subscriptions,” Grubb told Spark. “This [quarantine] could have a great impact on our local economy. These businesses count on us.”

Grubb believes that there is “no way of recouping the income” she’s lost, even if she is busy when her business reopens.

While some students were disappointed about not being able to attend prom, others took action. East junior Lindsay Patton already had a dress, so she and her sister, East senior Katie Patton, decided to have a prom of their own.

“I did my hair and makeup, put on my dress, and then my boyfriend came over wearing a bow tie and nice clothes,” Lindsay said. “He brought me a corsage and a matching boutonniere. Then we took prom pictures together.”

East senior Macey Palmer, who has been to all seven of her high school dances, said the best part about prom was the “community.” She loved getting together with friends and having a good time.

“For future high schoolers: make sure you go to school events, dances, join clubs, and get involved,” Palmer told Spark. “Don’t take anything for granted, enjoy your high school experience, and have fun.”