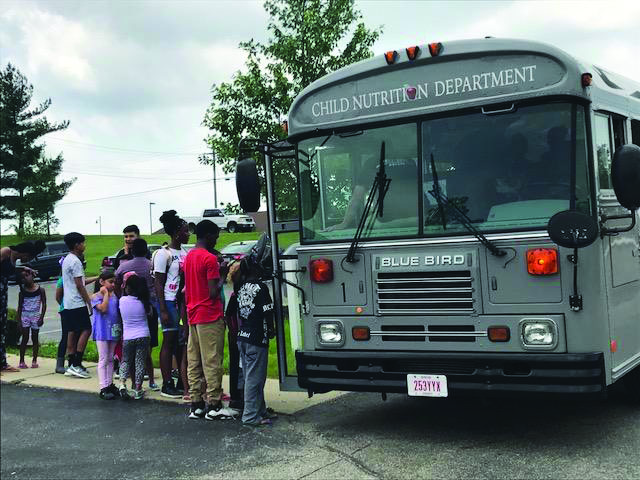 Children line up to receive their lunch.

Not Just Loafing Around

The children’s excitement mounted as they watched the gray school bus pull up in front of them, even though it was the middle of June. They waited patiently as the bus came to a stop and the doors opened to allow five children on at a time, giving some of them their only meal for the day. This is Lakota’s initiative to continue to provide lunch for students and families in the district over the summer.

Lakota’s summer food program began 10 years ago as members of local churches and the Butler County Success Program provided donated food to children in need in the Lakota district. One of those churches was Mission Possible, which began a program to teach literacy and life skills in addition to working with the other churches to provide food. The churches officially joined to form Faith Alliance in 2012.

Volunteers walked among the crowd, maintaining order and bringing napkins and silverware to those who forgot to pick one up. Many of the volunteers had been participating in the summer food program for years. One of these volunteers is East junior Jenna Breiner, whose father is the site coordinator for the Lakota Pointe area, one of seven sites where Lakota delivers the meals.

“My big job this year is I’m learning Spanish and trying to become fluent,” Breiner said. “There are a lot of English Language Learners (ELL) in the program, so I’ll go in and help translate and speak to kids.”

The kitchens of Liberty Junior remain open Monday through Friday from May 29 to Aug. 2 to cook the food. Then, two buses are loaded with the food and then travel to the designated sites throughout the Lakota district. Arrival times are staggered between 11 a.m. and 1 p.m. According to Parent Engagement and Community Outreach director for Lakota Outreach, Diversity, and Inclusion (LODI) Angie Brown, the sites where the meals will be delivered are determined based on census data that shows where there are high populations of students eligible for free or reduced lunch.

When Lakota and Faith Alliance joined their efforts in 2015, Lakota was able to provide a steady supply of the school’s hot lunches. Funding for Lakota from the United States Department of Agriculture (USDA) also helped make the program a success.

“When Lakota joined [the churches], they took care of the food program so the churches could expand to other programs,” Turner said. “Mission Possible started in Monroe, but we branched over to Lakota with the help of the food bus.”

One of the new learning experiences that come with the summer lunch program is the Midpointe Library’s bookmobile. The bookmobile travels to the lunch sites on scheduled days to encourage students to keep reading over the summer.

“Kids could go to the library while they went to lunch, so [Lakota and their partners] really do a good job of trying to make [the program] more than about food,” said Lakota Community Liaison Jennifer Tye, who works with grades 7-12. “It creates more of that community, [because] they [also] chat with the volunteers and play once they’re done eating.”

According to Lakota Child Nutrition Senior Director of Business Operations Craig Hatfield, the summer food program wouldn’t be possible without the partnership between Lakota and Faith Alliance.

[The kids] just want some love really. They want to eat and they want to be loved on, so you might play ball with them, or you might just sit and chat with them.

“Our partner, Faith Alliance, outreaches and advertises throughout Liberty Township and West Chester communities to advertise this wonderful opportunity,” Hatfield said. “By doing this, we were also able to expand the program and serve more children.”

Lakota is also starting an academic program of their own for Woodland Elementary students called Whole Again.The program provides a catered breakfast and lunch alongside academic help in all areas to prevent the students from losing many of the skills they learned during the previous school year. Brown could only choose one school for which to pilot the program, and chose Woodland due to the excitement the principals showed about starting.

“Mr. Wise and Miss Willis, the Principal and Assistant Principal at Woodland, will write a curriculum to make sure that summer slide doesn’t hurt the kids,” Brown said. “The program consists of all the academics they need to challenge them. Some may just need a little encouragement, so it’s really great for that.”

In return for funding from the USDA, the district and its partners must follow the USDA’s guidelines for the summer food program. Lakota is required to advertise the program, and does so through newsletters and the district’s media publications. Child Nutrition must also make sure that the meals themselves provide options with adequate nutritional value.

In addition, only students from the age of one-18 can receive a free meal. If a student has a medical disability, he or she is eligible to receive meals until the age of 21. The students also can’t take any of the food home with them.

Lakota is not alone in their efforts to make sure that all their students are nourished after the academic year ends. The USDA funds summer food programs for any school district with an area where 50 percent or more of the students receive free or reduced lunch, including Kings, Hamilton, and Middletown. Kings originally applied for the program because a significant number of students required free or reduced lunch in the south Lebanon area.

“We served 1,300 meals last year, [and] we’re hoping to serve more. We want our program to help,” said Kings Food Service Director Jennifer Arlinghaus, who has run the program for 13 years.

According to the USDA, 11.8 percent of households in the United States (US), or over 125 million households were considered food insecure in 2017. The food insecurity rate for Ohio was 13.7 percent, nearly two percent higher than the national average.

“If there’s a need, we try to connect [students] with a resource that can help and fill that need,” Tye said. “If the student isn’t hungry or worrying about where they’re going to sleep tonight, or that their teeth hurt, they’re going to focus more on school.”

According to the American Psychological Association, effects of food insecurity on a child can include an increased risk of chronic illness and depression in adolescence and later in life. This is what drives Brown in her work for both the program and as part of LODI.

“[The kids] just want some love really,” Brown said. “They want to eat and they want to be loved on, so you might play ball with them, or you might just sit and chat with them.”