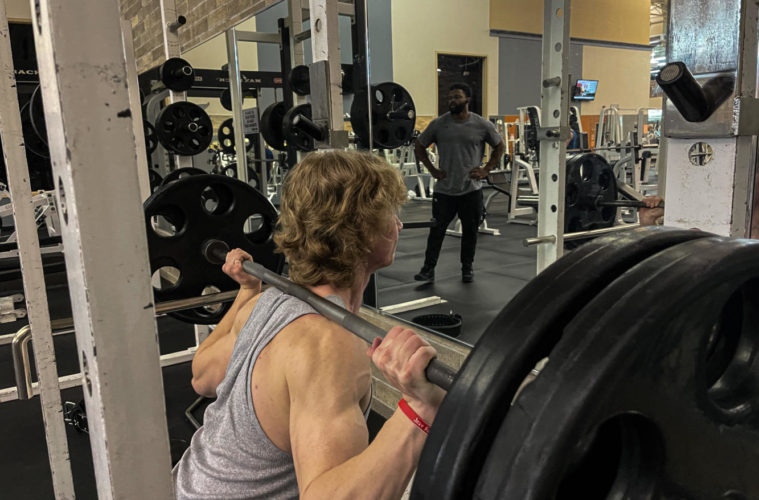 No Pain, No Gain

The sign centered on the red brick building with large, bold, white letters reading “Fitworks Gym” gleamed in the sun as East junior, Brad Reid, opened the door to his second home.

The gym is where Reid feels most confident and where he lets out his stress and worries in life, but it has not always been like this for him.

Reid was born with a condition called Pectus Excavatum, which causes the sternum to grow inwards instead of outwards. In Reid’s case, his inward growth caused a dip in the chest, which in turn, created breathing problems and pressure on the lungs and heart. In Nov. of 2018, Reid underwent surgery.

“The pain was bad and it was hard to move and sit up,” Reid says. “But after the surgery was done I could breathe a lot easier.”

Six months of recovery later, Reid no longer recognized himself. Because of the surgery, he experienced weight loss and was not happy with the way he looked or felt.

In July of 2020, after being stuck inside and quarantined because of COVID-19 for months, the gyms were opening back up and Reid decided that this was his opportunity to start his journey of self worth and confidence.

After going through troubling times and the aftermath of the surgery, Reid realized that lifting weights and going to the gym was the one thing that stayed constant and what got him through the most difficult parts of his life.

“I started going to the gym because I wanted to inspire people; I wanted to make something of myself,” Reid says. “I realized I loved it when that was the one thing I still wanted to do after hard times.”

Since that moment of realization, and going to the gym six to seven times a week, every week, for seven months, Reid has become stronger both mentally and physically.

“My life has changed dramatically since I’ve started lifting; people started showing me more respect and I have more respect for myself,” Reid says. “I felt much more confident swimming and doing other activities.”

“My favorite part about lifting with Brad is that he makes it fun,” Omeara says. “He has the ability to make me more motivated to go. Not just to better myself but also to have fun.”

Colton Simkins, East Junior, lifts with Reid and agrees that he is significantly more positive now because of going to the gym.

“Brad has been more positive and motivated both in the gym and in school.” Simkins says.

He helps others by going to the gym one on one and showing them where to start. Beginning to lift can be overwhelming and hard to maintain motivation.

“Advice I always give is do not be afraid to start. Everyone starts somewhere.” Reid says. “I was 129 lbs before I started and now sit at 178. You never know what’s going to happen unless you try. Don’t be afraid of the weight you start with.”

In under a year, he added almost 100 lbs to his PRs and is more confident and happy then he ever has been.

“Since we started I’ve seen Brad grow not only physically but also mentally,” O’meara says. “Brad always comes to the Gym with a positive attitude and pushes everyone to their max.”