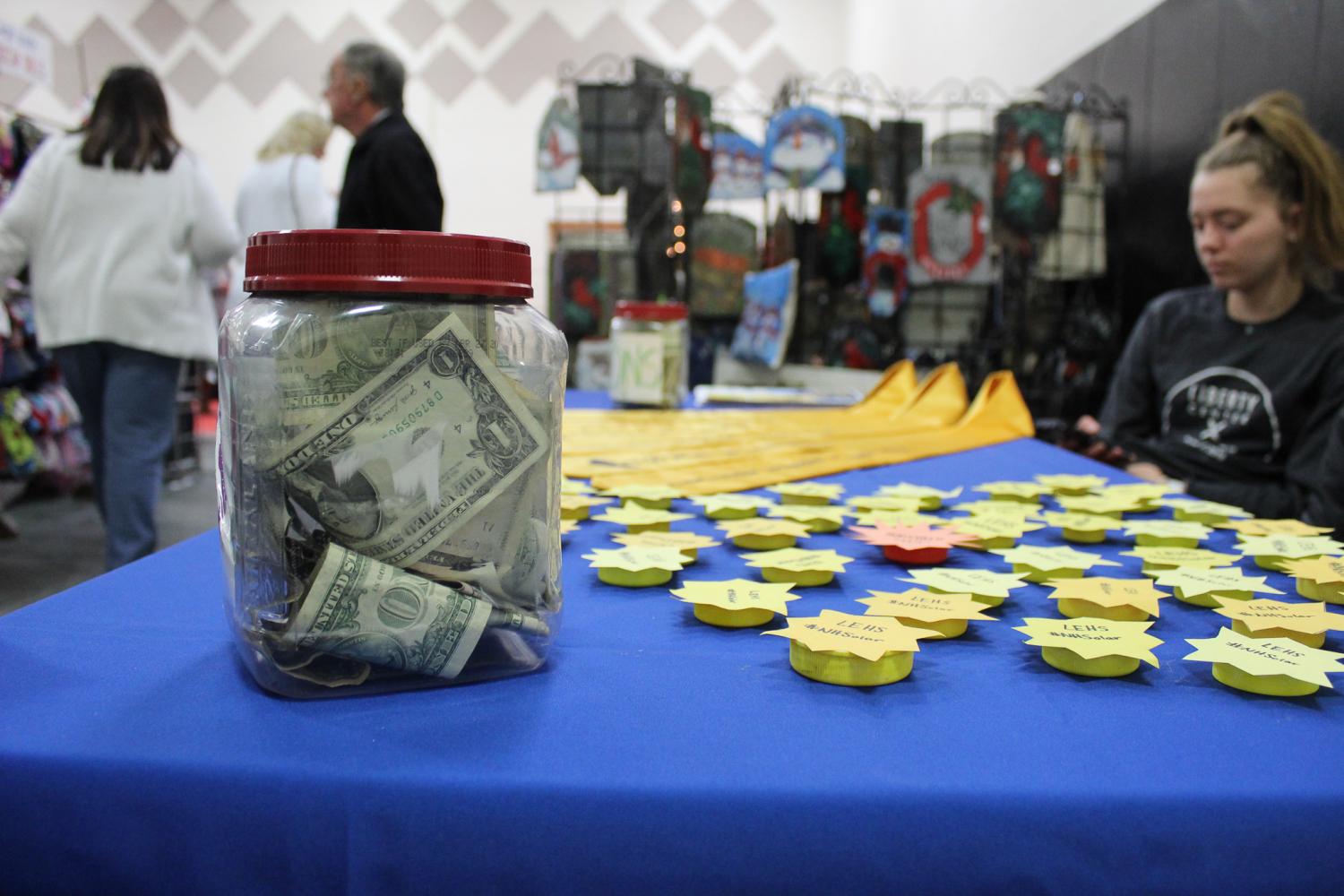 At East's annual craft show, NHS set up a booth to collect donations to build the solar array.

As she’s walking to her fourth period Advanced Placement (AP) Literature class, she rounds the corner and spots the gold poster taped strategically to the wall. She reads each word, even though she’s seen it a thousand times and a smile of satisfaction spreads across her face, knowing that she gets to be a part of this project.

East senior and NHS Secretary Eve Beiting is excited about this year’s unique NHS service project: a solar array, which will make Lakota East the first public high school in Southwestern Ohio to be partially powered by solar energy.

The five NHS officers decided in the summer that their annual service project would be environmentally-focused with the tag name “Earth to East.” It wasn’t until the fall that they decided to pursue a solar array and named the project #NHSolar.

NHS advisor and East Spanish teacher Maria Maine was surprised when the idea of the solar was initially came up at a planning meeting.

“[My co-advisor and I] thought it was a very ambitious project, but that it would have a really big impact,” Maine said.

Maine has been an NHS adviser for the past two years, working alongside East English teacher Andy Alexander. This is the first year NHS has undertaken a project like this.

“It’s a very large scale project compared to previous years,” Maine said. “In today’s society the environment is an issue that has come to the forefront and we wanted to make an impact in any way we could.”

President and founder of TMI Energy Solutions Mark Gillespie, who is currently among the many local companies developing a design for the array, believes utilizing green energy alternatives such as solar panels present schools with a number of benefits.

“There are multiple reasons why a school would utilize solar energy,” Gillespie said. “One of the most important reasons is to reduce fossil use and enter into the renewable market. Sometimes you can even save money by using solar over the long term.”

The 104 NHS members will pitch in to this year-long project by planning fundraisers and volunteering at events. On Dec. 13, NHS hosted a “Solar Shootout” in which students bet on which faculty members they predicted could make the most baskets in 30 seconds during the Colerain v. East basketball game. In the week leading up to the event, students put money into labeled jars of faculty members and students donated money to the jar of the teacher they wanted to have a disadvantage in the game. The “disadvantages” included wearing a banana suit, oven mitts, and duct taped sunglasses.

On Jan 25, NHS will host the second annual Sadie Hawkins dance with a 1980’s theme. This will likely prove to be their most profitable fundraiser, based on the revenue it generated in 2019.

In order to fund a project of this magnitude, NHS will have to raise more money this year than they have in previous years. The officers are unsure of the exact cost of the array, as it depends on the size of the project and its placement. Based on current fundraising predictions, they tentatively anticipate the array will be constructed above the gymnasium.

Gillespie says solar energy prices range greatly depending on the types of materials and the size of the array.

“Solar panels are sold by the watt, which can range anywhere from about 40 cents a watt to 70 cents a watt,” Gillespie said. “But all that gives you is the panel. Then you have to build the array, which is constructed of panels, racking, inverters, wiring, and monitoring. [In the end], they can cost anywhere from $2.50 to $2.75 a watt.”

Maine doesn’t want to impact of this project to stop at East, though. She hopes the solar array will benefit the community as well.

“It will make both Lakota East and the district more environmentally friendly,” Maine said. “Using green energy will [also] positively contribute to the environment and the community’s well-being,”

Beiting anticipates that this project will have huge implications for environmental awareness and proactivity. The project, she says, is designed to not only produce a physical product, but to inspire action among the community and student body.

“I’m hoping that we can inspire the community to take action that will benefit the environment,” Beiting said. “It’s important for future students to know that other students were able to make a change like this.”

East Principal Suzanna Davis is also excited about the project because she anticipates that East’s leadership in this area will empower other districts to look into green energy.

“Anytime we see a high school that’s pursuing this type of an aggressive project, both to support the environment as well as to to look at cost saving measures, that that’s leadership,” Davis said. “What does that mean for this district and other districts? I think it means that we become kind of the standard of which other districts may look to in terms of looking at options for solar energy.”

Gillespie also believes that East’s transition into solar energy may inspire other Lakota schools as well as other districts to follow suit.

“I hope that [the array] will inspire the whole district to take a look at what other solar projects they can do to enhance their green footprint and then spread that out to other schools,” Gillespie said.

Beiting hopes the impact of this project will be present after the NHS members graduate this spring. The solar array, she says, is the legacy that her and the other NHS members will leave behind.

“Providing solar energy will have a really big impact,” Beiting said. “The solar array will outlive this NHS year.”