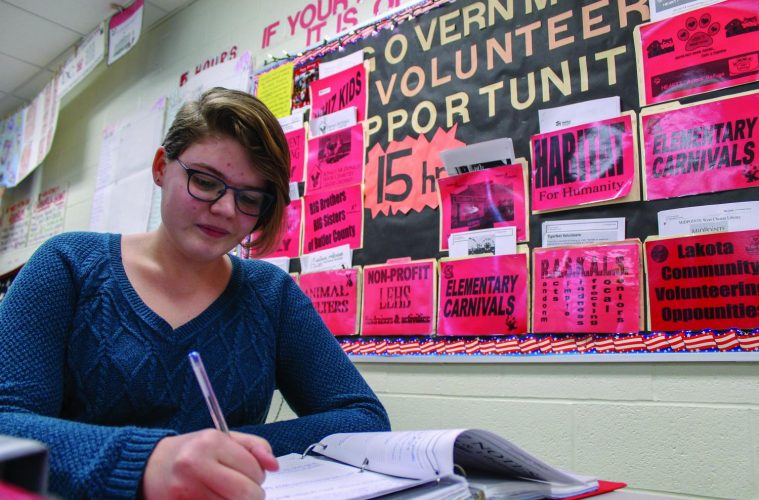 Every year on the day after election day, East government teacher Tisha Grote encourages her students to take the free Americanism test administered by the American Legion. East junior Kaya West took Grote up on her offer of extra credit and tested her knowledge, placing among the top three junior girls in the state.

“[I studied] just a little bit, that day and the night before. I really didn’t think I would do well, but I thought [I’d just] take it again next year and do better,” said West, whose score tied with a fellow East junior. “They used the essay as a tie-breaker and then they moved [me] up to the county level, and then the state level.”

The test is comprised of 50 multiple choice, true or false, and fill-in-the-blank questions organized in seven sections: the United States (US) flag, the Declaration of Independence, the US Constitution, the federal, state, city, township, and school governments. There is a 300-word essay at the end of the test that revolves around a current news topic.

Jerry Nelson is the Americanism chairman and service officer for American Legion Post 681 located in West Chester. He first administered the Americanism test in 2008 to Grote’s students.

“The Americanism test gives the students the ability to test themselves as far as what they know about government,” Nelson said. “We hope that [it] will instill them to go on and discover more about government and to look into the freedoms that America offers.”

According to Nelson and Grote, the hardest section is the flag etiquette, but West thought the local government questions were more challenging.

“There were a lot of Ohio questions, like how many people are in the Ohio Senate, how many years can an Ohio Justice serve and that was hard because we don’t learn a lot about local stuff [in school, but] more national stuff,” West said. “But it’s probably good that I got to study that for the test because it’s good to know.”

Grote has had a total of four students win the trip all within the past three years: Mikayla Bogan in 2017, Hannah Ackerman and Weston Lindner in 2018, and Kaya West in 2019.

West will meet with the other winners in Columbus to board a 55-passenger bus that will take them to Washington D.C. They will be put up in a hotel in downtown D.C. for three days and then travel to Gettysburg, Pennsylvania for the last two days of the trip.

“Probably the most important thing to me that [the students] do is go to the Arlington Cemetery,” Nelson said. “Then they lay a wreath at the tomb of the unknown soldier.”

West has been to D.C. twice, but she says she is most excited to see the Franklin D. Roosevelt memorial because she has never seen it.

“The American Legion is a veterans organization so I’m excited to go and they are going to be guiding us kind of through that lens,” West said. “I’ve never gone with that focus, so I’m excited for that.”

There are multiple reasons Grote gives students the opportunity to take the test. One reason is so that she can see what The American Legion values about the constitution and the state and local government.

“Establishing community and building relationships with students and outside members of the community is super important so that’s the number one [reason I’m] bringing [Nelson] into the class,” Grote said. “[Also] so students can see veterans of the community, and veterans can see the future of America.”