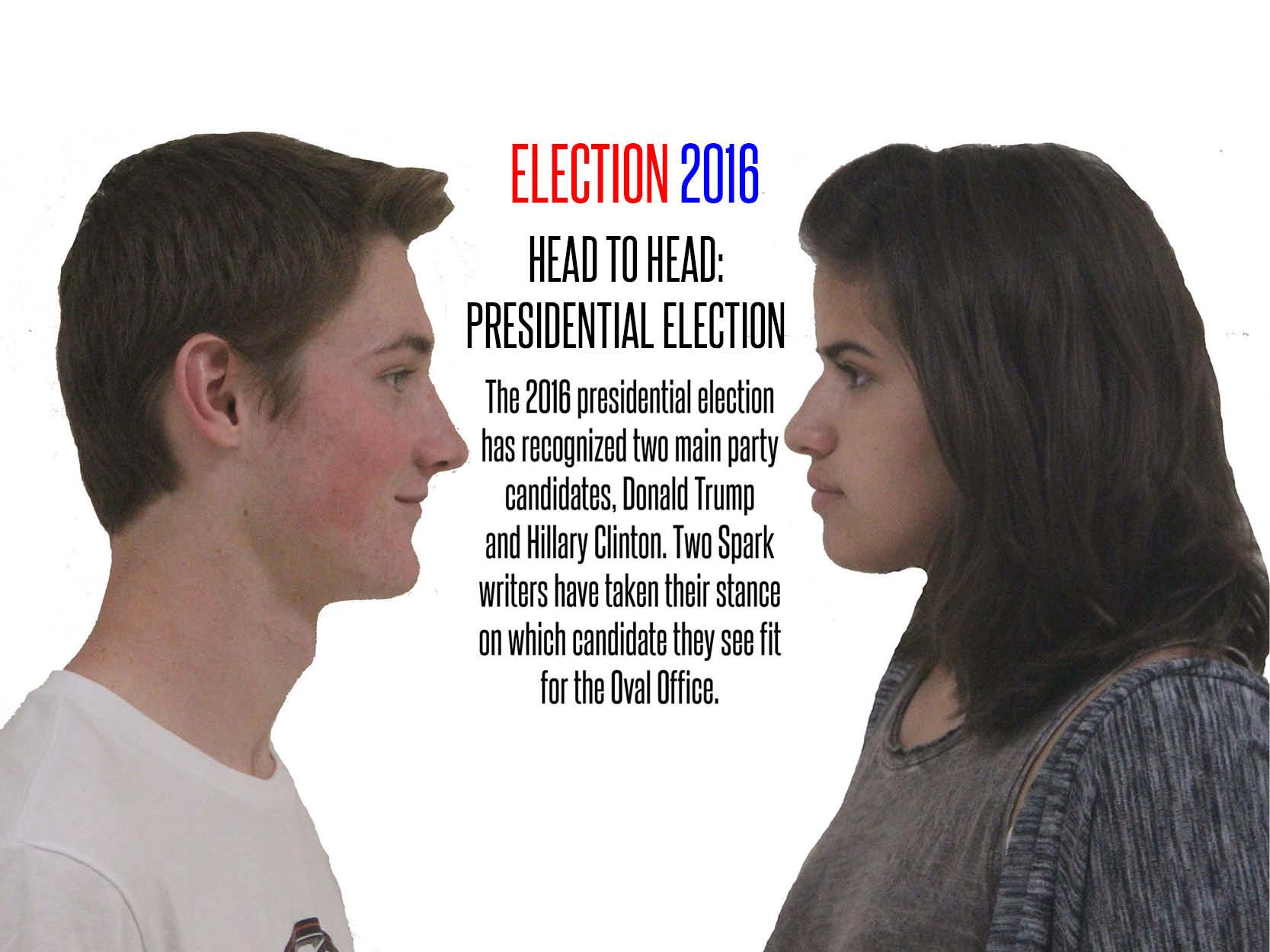 Why Trump Should be President

The United States has a lot of problems that need fixing. There’s a staggering national debt of $19 trillion according to Treasury Direct, there is racial violence erupting all over the country in places such as Charlotte, N.C.; Milwaukee, Wis.; and Baltimore, and national security is weak with 11 million illegal immigrants living in the U.S. according to the Migration Policy Institute. America needs a leader that is aware of these problems and has the courage to produce real change, leading it back to being the great country it has been in the past. If voters are looking for someone that can turn America around, look no further than Donald Trump.

The main criticisms of Trump are about the way that he expresses his views to people, not about his ideas themselves. The public and the media tend to pick on his lack of political correctness, and things he says are often misinterpreted as a result. If he words his thoughts about illegal immigration the wrong way, he’s a racist. If he makes a strange face during a speech, he’s not professional enough to be president. Trump is overly scrutinized for things that aren’t very important to the election, and this can get in the way of people really understanding his political policies. When looking at the policies that each candidate plans to use to run the country, Trump is clearly the better option for the future of America.

One of the most debated issues when it comes to Trump is immigration and the border wall between the U.S. and Mexico. People may think that Trump does not want anyone to immigrate into the country. However, this is not the case, and even with the wall, Trump will allow people to come over to America legally.

“In the middle of the wall, we’re going to have a big, beautiful door,” said Trump in an interview on ABC’s Jimmy Kimmel Live. “So people can come into our country through a legal process.”

Of the 11 million illegal immigrants in the United States, eight million are in the workforce, including three million between Texas and California, according to the Federation for American Immigration Reform. With a rising number of illegal immigrants living in the U.S., Trump is simply tired of people crossing into our country illegally, taking jobs from hard-working Americans, and not having to pay taxes like the legal U.S. citizens.

The border policy discussion leads into another issue facing the nation: the threat of terrorism. Trump often calls himself the “law and order” candidate because he plans to restore order by eliminating terrorism. There were 32,700 people killed from terrorist attacks around the world in 2015, according to The Economist, and there have been several incidents of terror in places like Paris and Belgium that have affected the entire world. Recent attacks in places such as New Jersey have shaken the foundation of our country and left the American people devastated.

“The terrorism in our cities threaten our very way of life,” said Trump during his speech at the Republican National Convention. “Any politician who does not grasp this danger is not fit to lead our country.”

Trump’s secure borders will help keep the threat of ISIS and other terror groups out of the country. People should feel safe going out in their community, and Trump cares deeply about the lives of American people. As president, Trump will keep Americans safe from the threat of terrorism.

While he will be a great Commander in Chief of the United States, Trump can’t keep Americans safe on his own. Trump is a big believer in the military, and he will increase the size of the armed forces to protect American lives. He has said he will add 50,000 Army troops, 70 Navy warships, and 100 Air Force planes. Trump knows how important the military and police are to the nation as a whole, and he honors police officers and veterans as the true heroes of the world.

When looking at the policies that each candidate plans to use to run the country, Trump is clearly the better option for the future of America.

Trump has recently been endorsed by the Fraternal Order of Police, the largest police union in America. Trump is also a big supporter of the Constitution, and he will uphold the Second Amendment, giving people the right to defend themselves from danger. These ideas go along with Trump’s law and order philosophy, using the police to make sure people follow the laws of the Constitution. Trump’s law and order policy and his support for the law enforcement and military makes him the clear choice for a president that will protect the lives and rights of American citizens.

A policy of Trump that often gets glossed over is his excellent economic strategy. He has vowed to be the highest job-producing president in the history of America by creating jobs through tax cuts and maintaining the federal minimum wage. Trump says the economy will increase by 3.5 percent and 25 million jobs will be created as a result. He wants to get people out of poverty and into the workforce, which will help cut into the national debt, one of his main economic goals. Trump will also decrease government spending and lower taxes on the upper and middle classes, cutting into the huge deficit that rose over $8 trillion in the last eight years. It is time for a change in the way the economy is run, and given his enormously successful business background, Donald Trump is the right man to create this change.

As the election gets closer, the race to the White House is continuing to tighten. Donald Trump has made huge progress from when he announced that he was running to where he stands now, and he is the leader America needs to lead the country back into excellence. He sees the problems that this nation faces and has a plan to turn the country around.

There are many reasons that Trump should be chosen as the 45th President of the United States. The candidates have laid out all their plans for improving America as the next President, and it’s now up to the people to decide who will be running the country. If people can get past the initial judgements of Donald Trump and see all the great ways he will improve this country, the right choice will be made today.

Why Clinton Should be President

In a Youtube video on April 12, 2015, Hillary Rodham Clinton announced her candidacy for president of the United States. Her announcement didn’t come as a shock to anyone in any party, however. Rumors and speculations of her possible candidacy had swept across nearly every national news source. It was as if she’d been running all of her political career.

That in itself is where people find fault in her politics. Many feel that with the current political climate in the White House, the Senate and the House of Representatives, the system is drastically disconnected from the American people. However, the idea of electing a candidate without the proper qualifications and prior knowledge to serve is incredibly naïve. Those who choose to participate in government, just like any occupation, must have a proper background so the job is done correctly. The kind of experience and political determination Clinton has demonstrated for the past 30 years will allow our government to reinforce the rights of all citizens.

If there was a single word that could sum up her campaign, it would be qualified. To put it frankly, the United States is lucky to have such an experienced candidate running for the highest office. Not only has Clinton stood by her husband in the White House, acting as both a spokesperson and a political affiliate, but she has been nothing but engaged in her own political career.

Prioritizing the rights of women, children, members of the LGBT+ community and all other citizens, Clinton has established herself as a level-headed, resilient individual who is nothing but fit for the Oval Office.

“We need more respect between and among our fellow Americans. We need to be listening more to each other. The last thing we need are leaders who try to divide us even more than we are,” Clinton said in a Florida speech. “We should be working to reach out to those who are different from us.”

30 years in the political arena not only justifies her candidacy, but also allows her to have a comprehensive understanding of both foreign and domestic affairs. The current state of countries in the Middle East calls for someone capable and competent to address the various conflicts, as well as the recent Brexit vote, the nickname given to the controversial decision for Britain to leave the European Union; the current unemployment rate in the United States; and the ever-growing issue of climate change. Maintaining national security while tackling these issues requires experience in a variety of positions, which she undeniably has.

Prioritizing the rights of women, children, members of the LGBT+ community and all other citizens, Clinton has established herself as a level-headed, resilient individual who is nothing but fit for the Oval Office.

Acting as the first female senator in New York, she introduced legislation to benefit healthcare and financial support for veterans, worked to ensure the quality of living for 9/11 first responders, and sponsored the Paycheck Fairness Act. Clinton’s appointment to Secretary of State followed suit. Not only did she negotiate a ceasefire between Israel and the Hamas, but she holds the record for most countries traveled while serving as Secretary of State. It should also be noted that she can pronounce these countries, unlike her opponent, Donald Trump.

Her political experience as a senator plays a major role in her promises to work across the aisle and compromise on a variety of issues with Democrats, Republicans and Independents. Partisanship is something Clinton has denounced, and she believes an effective way to get work done in the political system is to collaborate with individuals of both parties.

“I have been in Washington, as you know, in and out, for a while,” Clinton said in an “Meet The Press Daily” interview. “I can see how things get done, and I know how much effort it takes to try to find that common ground.”

Many Republicans have even stepped forward to express the strengths regarding her bipartisan beliefs, and some have even gone so far as to cross party lines and cast their vote for her.

However, her trustworthiness as an elected official has been used in opposition to her candidacy. Her 33,000 emails have been regarded as the most prominent attack against the Clinton campaign, yet it seems to be forgotten that she was cleared by the FBI not once, but twice. This is simply because she broke no laws, considering there was no such law that prohibited the use of a private server – just ask Colin Powell, Secretary of State in the second Bush administration, who had just that: a private email server.

If elected, Trump’s indisputable lack of experience in the political environment will lead to unpredictability in office, an absence of knowledge regarding both domestic and foreign policy, and an even more divided nation. His “winning temperament” even managed to get a laugh during the presidential debate, and his demeaning rhetoric of women and minorities is evidenced by the fact he was endorsed by the Ku Klux Klan’s newspaper, the “Crusader.”

Clinton’s overall experience has been such a prominent conversation in the race, it has been used as a counterargument against her candidacy. The 2016 election may prove to be the first year when being over-qualified for a job is seen as a negative. She’s knowledgeable, strong and temperamentally fit – if elected, her strength and optimism will ensure a successful four years for the United States and the American people.