The notch. I still can’t forget about the notch and the “stainless-steel” looking sides.

With the holiday season now over, there is no doubt that many people now have the new iPhone. The iPhone X (pronounced “ten”) was released November 3, just in time for the holidays, but new enough that Apple wouldn’t be expected to put a deal on the phone. Although the phone itself has interesting new features, it feels like we’re getting to the point of adding things for the fun of it. Animoji is cool, but is it really necessary?

At the base price of $999, the flagship phone has features like Face ID, Animoji, the OLED screen, controlling the screen through gestures and the notch.

Face ID is the real game-changer. In an effort to minimize the bezel, Apple had to remove the home button from their phone. However, people still need an effortless way to unlock their phone. Thus, Apple tried to take us to 3017 by introducing Face ID, which eliminates the wait time people normally experienced with holding the home button for Touch ID. Samsung already had this technology with their devices, but not to the level of the iPhone X, which “projects and analyzes 30,000 invisible dots to create a precise depth map of your face,” according to the Apple website. The problem is, everyone can see your face. People can take a picture of your face, make a mold with it and try to unlock your iPhone. Or at the very least, try to unlock your phone while you are sleeping. But with a thumbprint, it’s pretty easy to notice someone trying to take your thumb to unlock your phone, so it feels more secure. While Apple tried to minimize hacks by requiring the user to look at their phone, it still doesn’t feel safe. According to Mashable, Face ID CAN be fooled by identical twins.

Because the home button was removed, users now have to swipe to do everything. I personally like having a clicky home button, which is why I didn’t like the iPhone 7 either. However, my friend and East student Wes Reed has the iPhone X and he said the gestures were really easy and addicting; when he tried to use his mom’s older generation iPhone, he instinctively tried to swipe.

In an effort to maximize the beautiful OLED screen space to 5.8 inches, with its clear and more accurate colors, Apple had to create a “notch”. This ever-present black rectangle takes up part of the status bar. Apple is known for its aesthetically pleasing, smooth designs. But the iPhone X? Ruined. The notch is ugly. Why couldn’t Apple just wait until it could somehow integrate the camera into the screen itself? I can’t help but think that the iPhone X design was rushed. 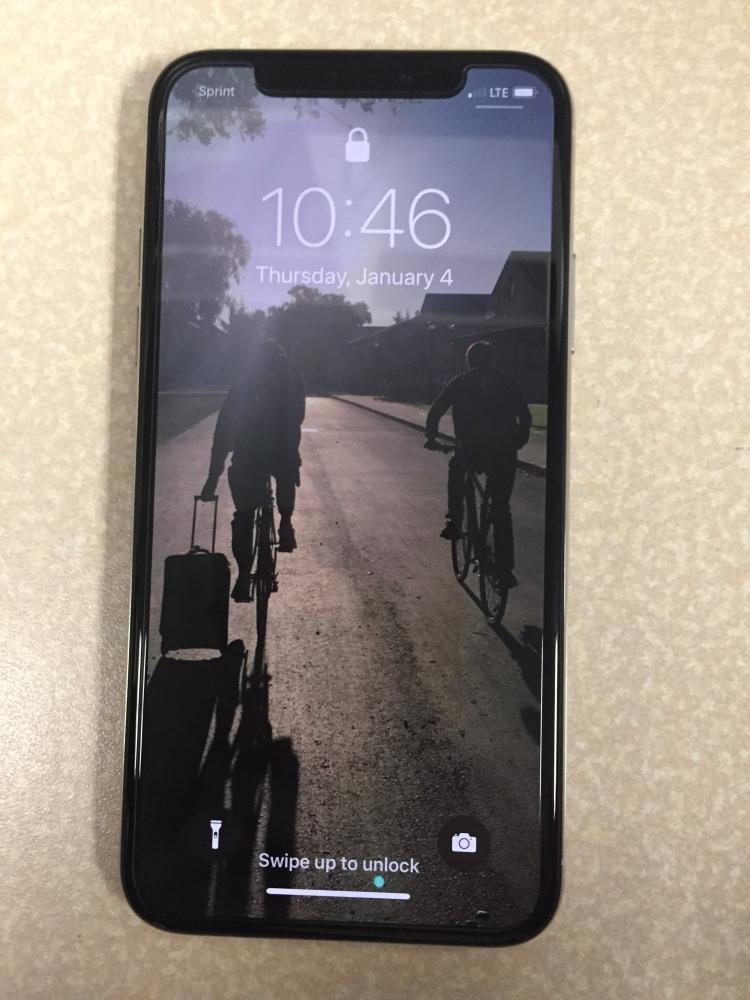 The “notch” sticks out even in the lock screen.

The one upside to the advanced selfie camera is Portrait Lighting Mode. This camera also powers the Animoji function. The camera is able to map out your face, track your muscle movements, and make it into an emoji. The animation is pretty smooth. With Portrait Lighting Mode, you can basically take professional level photos with just your phone. With storage capacities of 64GB and 256GB, there is plenty of space to take pictures. If you’re paying $1000 for a phone, it almost makes up for the fact that upper level cameras cost about the same amount, so it’s almost a deal.

Apple introduced wireless charging and glass backs in the iPhone 8, which is also in the iPhone X. The iPhone X comes loaded with iOS11, which was also is available on all iPhones 5s and newer, most iPads and iPod (6th gen). I have to say, I’m really liking iOS11. It looks great, even on the iPhone X. With the new and improved Control Center and the Emergency SOS function that can quickly contact emergency services and disable Touch ID, it’s easy to see that Apple’s software is still evolving in beneficial ways.

But the real question is, what happened to the iPhone 9?