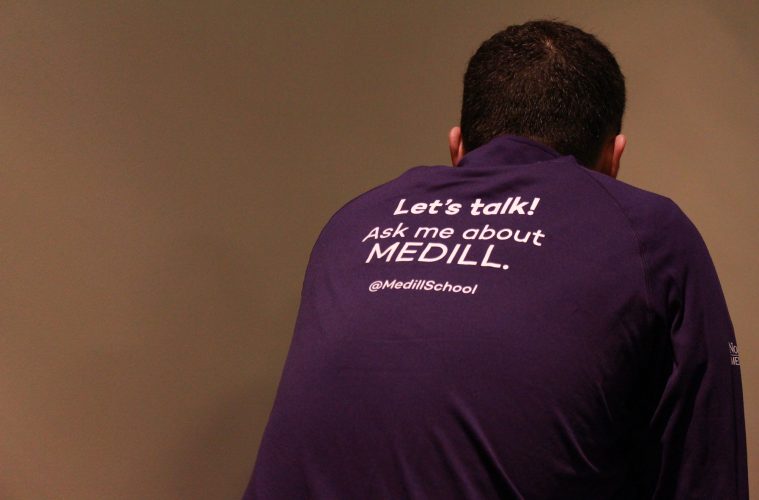 A representative from Medill School of Journalism at Northwestern University waits to speak to students at the NSPA/JEA Fall Convention.

For years she has watched the football games off of her laptop at home, cheering the team on. She always dreamed of the moment she would become a Buckeye herself and be in the stands in the student section. The Ohio State University (OSU) freshman and Lakota East alum Sydney Rader is at her first football game as a student of OSU.

“Ohio State had been my dream school since I was young,” Rader said. “When I figured out I wanted to go into pediatric oncology, I realized that there was no better place for me because of everything they do in the realm of funding and cancer research.”

Rader is one of 7,000 in The Ohio State University class of 2020 students. While she loves the student life and academic program at OSU, she and an increasing number of students have to find ways to pay for the cost of college.

I applied for a lot [of scholarships] through the West Chester community foundation, Lakota East and also random ones I found online

Find out why college costs have increased rapidly since the 70s, in correlation to student loan debt.

“I applied for a ton of scholarships which helped me out so much,” Rader said. “But I also had to really work for them.”

For Rader, she doesn’t have to worry about student loans or college debt for tuition, at least in her first year of college. However, according to the New York Federal Reserve, 44.2 million Americans are in student loan debt.

OSU provides several merit-based scholarships to help mitigate the cost, including the Morrill Scholarship Program, Eminence Fellows Program and Scholarship and Land Grant Opportunity Scholarship which looks at both the academic merit and financial need. It also provides financial aid through the Free Application for Financial Student Aid, which provides more than $150 billion in different forms including grants, loans and work-study for more than 13 million students across the country, according to the Federal Student Aid.

University of Southern California (USC) Annenberg Admission Counselor Kurt Clements says that he has been approached by applying students about paying for college.

“For USC specifically, we give out an incredible amount of financial aid and scholarships so we really do want to make it accessible for students to come to USC.” Clements told Spark. “But ultimately it comes down to the investment you want to make. So if you think that spending the money for college is worth it and it’s worth it in terms of your personal development and your professional development then  we encourage students to go for it and to do it.”

Additionally, college students not only have to pay for college tuition but also room and board. According to US News, 26 percent of OSU students lived in its provided housing in the 2015-16 school year, which cost an average of $11,666. To combat both the cost of tuition and room and board, Rader searched for scholarships in both the national and local level.

Ohio State had been my dream school since I was young. When I figured out I wanted to go into pediatric oncology, I realized that there was no better place for me because of everything they do in the realm of funding and cancer research.

“I applied for a lot [of scholarships] through the West Chester community foundation, Lakota East and also random ones I found online,” Rader said.

To reach her goal of going to OSU, Rader attributes the encouragement and financial help she’s had from those around her.

“I’m extremely thankful for the families and organizations that were willing to put so much into my future,” Rader said. “I’m so happy with my decision and have had so many amazing experiences at Ohio State already.”