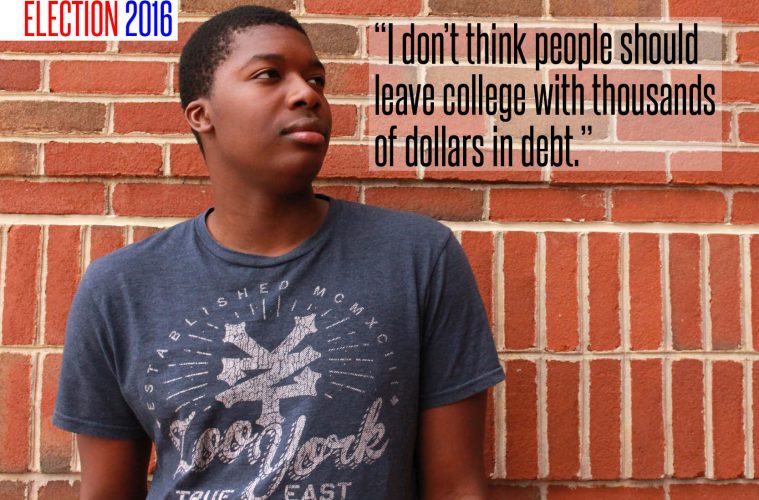 He sits in economics class calculating the exact amount of money he would owe Purdue University, his dream school, if he attended the college. The total, without any scholarships, would be $209,010.

East junior Alpha Konate has been dreaming of becoming an engineer at Purdue University, but is horrified to think about how much debt his dream could come with. With the terrifying number breathing down his back, Konate has focused in on this election. He is a proud Hillary Clinton supporter.

“I have paid more attention to this election, because this one will really affect my life and the choices I will make when I’m older,” Konate said. “They are talking about things like colleges, which will affect me in a few years after I graduate.”

While Konate compared both of the candidates’ views on many issues, he focused in on college. Clinton’s stance on college tuition is a major reason why Konate’s supporting her. Her plan to reduce college costs is to significantly cut interest rates so the government never profits from student loans, according to her campaign website.

“I don’t think college should be free,” Konate said. “But I also don’t think people should be leaving college thousands of dollars in debt. I think that wouldn’t be the case if college was just cheaper.”

Konate has also watched every debate and is very focused on the moral standings of both candidates.

“My biggest thing would have to be that Donald Trump isn’t fit to be president,” Konate said. “Donald Trump has degraded women, Latinos, Muslims and black people. Yet he thinks he is the perfect person to govern those people; I don’t think that’s how it works.”

East junior Adam Chaney agrees with Konate on many aspects of the election. Konate and Chaney both think that the overall moral standings of the candidates play a major role in this election.

“Many people I’ve talked to support Trump just because they don’t like Clinton, and it amazes me on how much they don’t like this woman based on little evidence; they always bring up the emails even though it’s been investigated,” Chaney said. “I support Hillary because I don’t think Trump is anywhere close to being qualified for the position, and she has had years of experience working in government.”

Konate is much more involved in this election and supporting Clinton than his father Doro Konate, but they still spend time talking to each other about their opinions.

“We do talk to him about politics every once in awhile,” Doro said. “[Alpha] has pretty separate views from me so we argue.”

Although Alpha’s views on Clinton differ from his father’s, he continues to stay strong with his opinion on the campaign.

“You can’t ignore what she did [referring to the email scandal],” Konate said. “I have thought about what she has done and what Donald Trump has done and picked the lesser of two evils.”