Lakota East senior Gillian Graham is taking her final tennis season one match at a time. Graham says she spent the offseason working harder than ever in order to have a memorable senior year.

“My goal for this season is to not really focus too hard on how many wins or points I can get,” Graham says. “The goal is to have a hard-fought match every time and to stick with it, and if I do that then that is what really matters to me.”

According to nine-year head tennis coach Karen Barnes, Graham keeps a calm and competitive attitude on the court. Graham’s doubles partner Kate Rodriguez says that Graham’s composure is the key factor that makes her so successful. 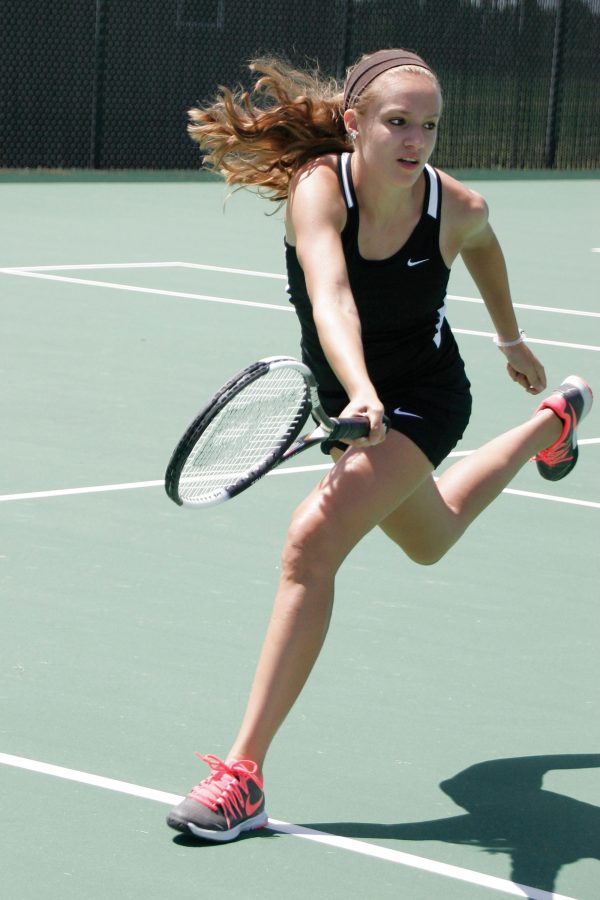 “You will never see her getting mad at herself or slamming her racket down like a lot of people do,” Rodriguez says. “I think it shows in her records and her game scores how mentally tough she is and how she perseveres and takes it one point at a time to end up pulling out the win.”

“Gillian is willing to work hard through every point, every game and every match,” Barnes says. “She is always willing to work on new strategies and techniques to help make her successful on the court.”

One of Graham’s strengths is her forehand shot, which is swinging the racket with the palm facing up. She uses it to close matches and she never gives up on herself, according to Barnes. The doubles duo had to play a third set against top-ranked teams like Loveland and Walnut Hills, and they pulled out the win both times. The tight matches are sometimes the border between a win or loss for the team overall, which is 8-4 on the season so far.

“It is so easy to communicate with her on the court, which will help us pull out close wins like Loveland and Walnut Hills,” Rodriguez says. “There is nobody I would rather play doubles with than [Graham].”