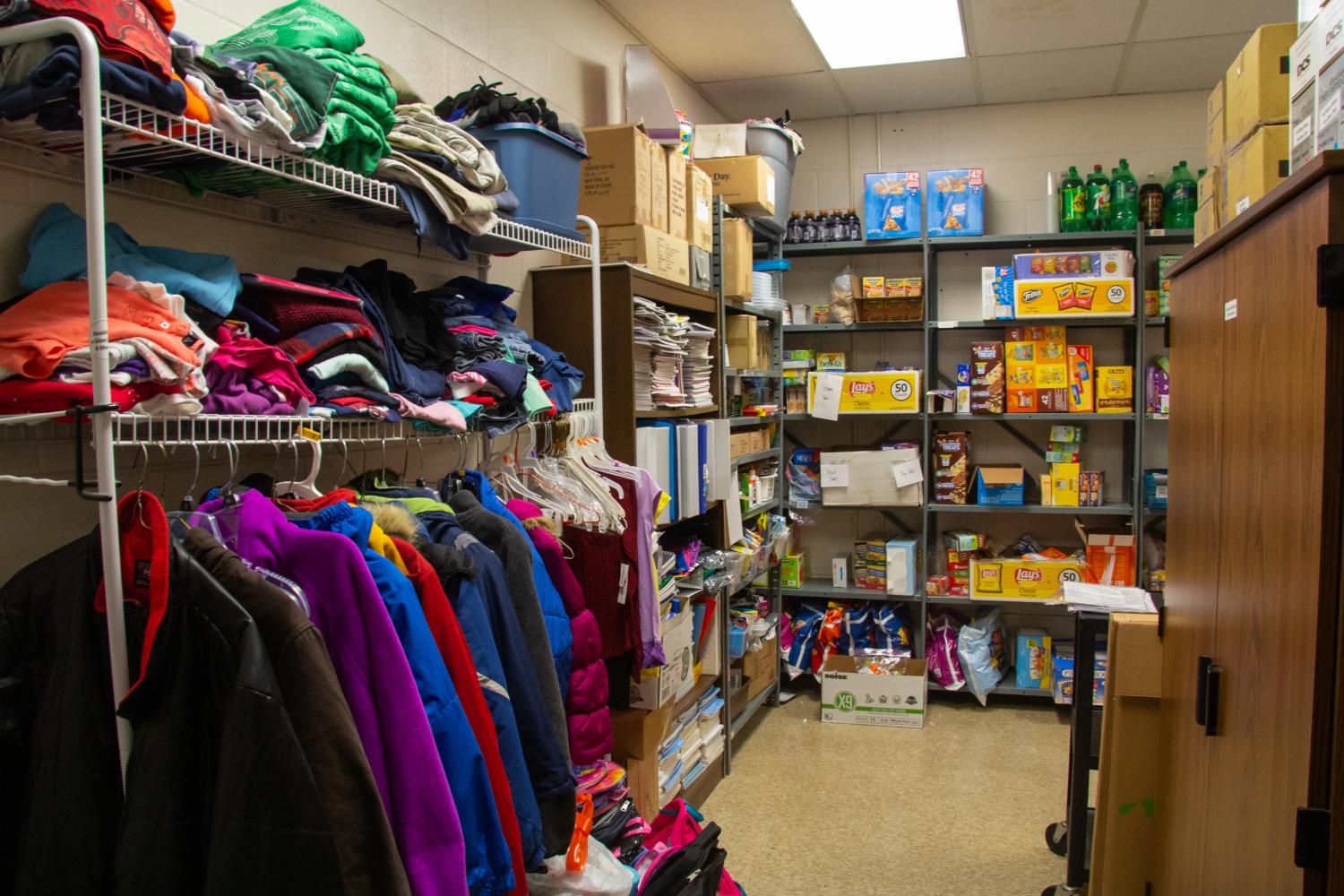 Adena Elementary's food pantry is stocked with a wide variety of items to help students.

story and photography by Anna Mullins

Schools like East Freshman, Shawnee Early Childhood School (ECS) and VanGorden Elementary have started their own food pantries. Adena Elementary food pantry inspired the initiative when they started to help students in their building.

The intention of the food pantries is to give teachers a centralized location where they can get supplies for their students. While many teachers already have a drawer where they keep snacks and other supplies handy, the pantries are funded through donations rather than out of teacher’s pockets.

A similar initiative, No Kid Hungry, is a national campaign started in 1993 to solve problems of hunger in the United States. According to a study in 2017 by No Kid Hungry, teachers spend approximately $300 a year on food for hungry students.

“It’s for anybody who has a need [that] we should be able to meet. So the plan is not only to sustain it, but to grow it,” said Angie Brown who is a part of Lakota Outreach, Diversity, and Inclusion (LODI). “We’re trying to meet the needs of our students right here, right now.”

After Adena teacher Amy Harris spoke to administration last year about her concerns, they created the food pantry. The pantry started out only stocking snacks, but administrators began to add hygiene items as the year progressed. With the help of community partners such as Kroger and various local churches, Adena was able to expand its supply of snacks and other items.

After the pantry was set up, administrators moved the small stockpile of school supplies, they already had, into the same area. The newest edition to the pantry has been winter clothing such as hats, gloves, coats, and shoes as the weather begins to get colder.

“Mrs. Harris came to our administration and [asked], ‘Is there anything we can do to get food for these kids?’” said Jessica Allshouse, the Community Liaison for Adena. “She was having a lot of students during the day come to her and tell her that they were hungry. And so she was spending a lot of her money that she’s making [as a teacher] here to get some food items for the kids.”

The pantries are for all students in the school to make sure they are learning in the most optimized environment. According to a study by No Kid Hungry, 80 percent of teachers see their students lose the ability to concentrate and 76 percent see poor academic progress when their students were hungry.

“We know that the need is everywhere,” Brown said. “And it doesn’t mean that it is always for our marginalized students. If you have somebody who’s been in inclement weather, and they come to school, how will [they] sit when [their] clothes and shoes are wet? [They’re] not learning. If there’s a problem, then we should be able to meet the needs of the students.”

Each school’s pantry  has its own needs. Adena finds itself always in need of food, because snacks are the most used item in the pantry, said Allshouse.

“We are always needing new items because we need to replace and replenish,” Allshouse said. “We just did another drive to help replace some of those snack items.”

Lakota Superintendent  Matt Miller heard about Adena’s pantry and wanted to expand it to the the whole district, using Adena as a model. LODI has stepped up to assist the expansion. They started by reaching out to IKEA, who offered to donate shelving for each of the schools.

“The District Parent Council (DPC) and LODI are working together with every school’s Parent Teacher Association (PTO) to establish food pantries throughout the district,” Miller said. “Our partners at IKEA West Chester have been generous enough to donate shelving for each food pantry.”

The East Freshman campus has also started a pantry. They received help from LODI, and were given one of the donated shelves from IKEA. These shelves have since been put to use, stocking clothing and food for the students.

“It was sometime [in] early spring, where we had a day where it’s pouring rain, and it’s probably 40 degrees and we know we have kids that walk,” East Freshman Associate Principal Robert Burnside said. “On this particular morning, rain starts hitting 6:30 – 7a.m.right as our people are walking in, and we had kids show up freezing cold and dripping wet.”

That morning, Laurel Canepa, a counselor at East Freshman, began trying to find clothes so that students would not have to sit in their wet clothing. The new pantry has quick snack foods, as well as sweatshirts and winter clothing.

“[The biggest item needed] food wise, is grab-and-go, stuff that’s easy to take,” Canepa said. “Really, what’s more helpful is those crackers and Pop-Tarts, even though they’re not the breakfast of champions.”

The pantry is open to any student who has a need. The goal for the pantry is to discreetly make students aware of the supplies available to them at the Freshman building, says Canepa.

“I’d like it to be something that’s known by students,” Canepa said. “Anybody can use it. People in need, [they] changes all the time…if you told me you had a need, I’m not going to question you.”

The pantry at East Freshman is mostly funded by the teachers themselves. Canepa reaches out to them via email and the teachers bring in the supplies that the students need.

“The goal of the food pantry is to help meet the needs of our students so that they are better able to focus on school work,” Miller said. “Whether it is a snack, school supplies or a personal hygiene item, the food pantry is another source for teachers to be able to help their students.”