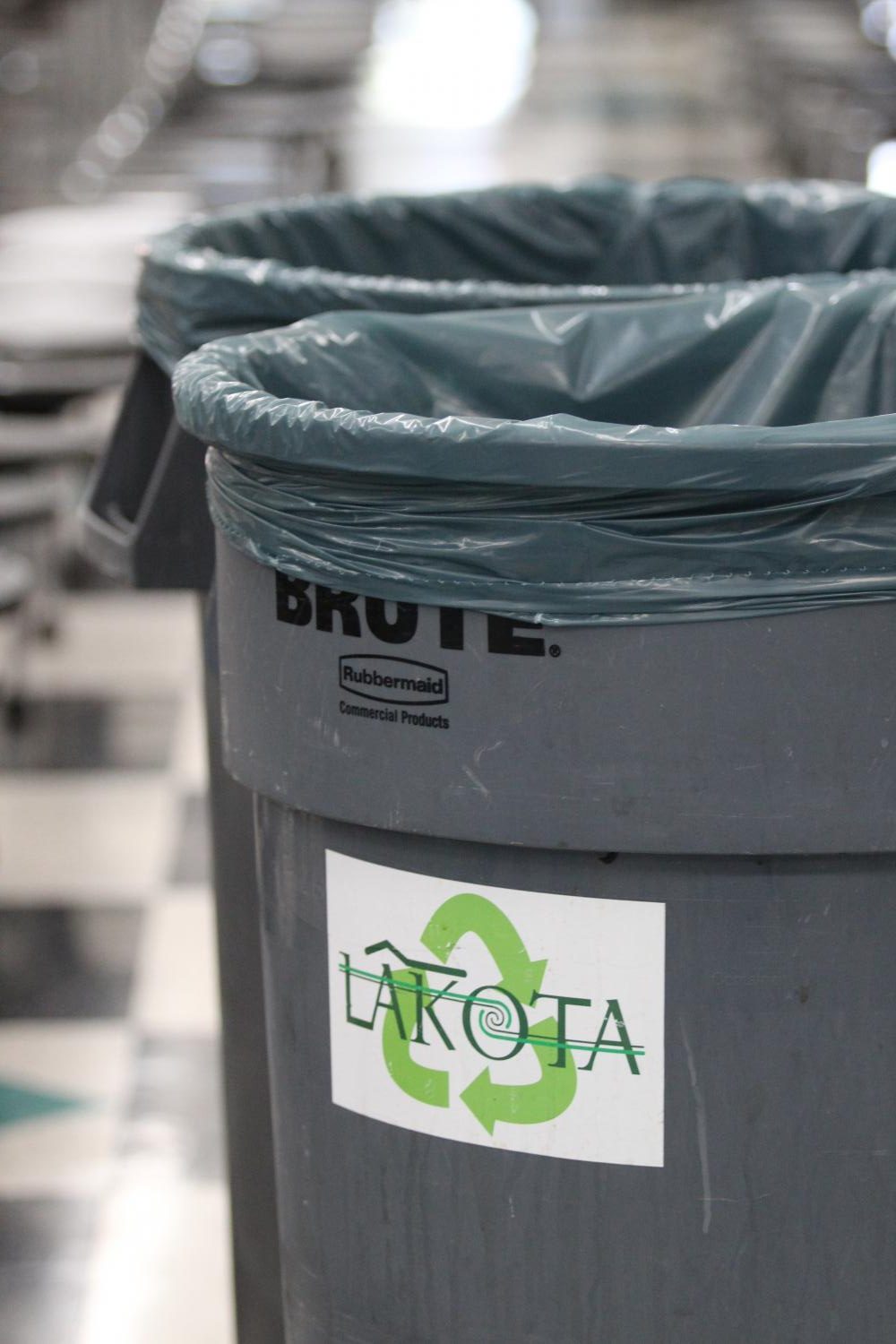 Walking away from the register towards her seat, surrounded by the senior’s friends, she goes and eats her lunch in the cafeteria. She makes jokes with her friends as she munches away on her food, when finally the bell rings. She gets up to throw away the remains of her lunch, taking the recyclable paper tray and the leftover bits of food and tossing them into the trashcan nearest to her seat.

The trash can still carries the sticker indicating the bin was at one time used for recycling.

East senior and Lakota East’s Environmental Advocates Forum (LEAF) Club president Kailyn Bost has had this lunch ritual for all of her three years at East.

“A few years ago, [LEAF Club] tried to reinforce recycling bins in the cafeteria,” Bost says. “But [the administration] took away the recycling bins because people kept throwing trash in them, despite repeatedly being told not to.”

Lakota’s Chief of Operations Officer Chris Passarge explained that recycling bins in the cafeteria would have to be a student-driven initiative because students need to take ownership of putting things in the right bins.

“When Rumpke, [a local trash and recycling company,] takes a recycle dumpster to their facility, they inspect the contents to ensure they are compliant,” Passarge says. “If they are not, we are charged an additional fee for them to dump the contents.”

According to Anne Gray, a Rumpke Education Specialist, about 1.4 pounds of waste comes into her location of work every day.

Besides the posters that Bost and other members of LEAF Club have put up, the club has been unable to come up with other ideas to help fix the school’s issue with recycling.

Although recycling bins in the cafeteria were not successful, East has other ways of reducing its environmental footprint on the community.
According to East’s Advanced Placement Environmental Science (APES) teacher and LEAF Club advisor Mark Folta, East has made increasing steps to help create a greener school.

“[We] produce the kind of foods that are available to students during the school year that [students] could harvest,” Folta says.

Folta said that there are many plants students can grow and harvest: apples, grapes, peppers, tomatoes, lettuce, and various berries to be grown at the school. All of these can be sold to students in the school’s cafeteria.

Along with recycling and harvesting foods, East has implemented succession forests along the interstate. The forests, which as Folta describes, are young forests that grow into mature ones. The forest was donated by Duke Energy. The company has to donate trees, according to the Clean Air Act of 1970, in order to lighten their ecological footprint. Spark reached out to Duke Energy, but did not receive a response. They decided to give the trees to East where teachers such as Folta could use them for educational purposes.

“[The forest is] going to take out carbon dioxide,” Folta says. “It’s also going to absorb some of that noise from the interstate.”

By allowing the trees to grow with no mowing or disturbances, students can see what a natural forest looks like. Along with that, Folta is using this year to teach about the invasive species that have started living in the forest and will be using it in an assignment for his APES students learning to identify the species.

“We have our annual tree plantings [in LEAF Club], but we also are going to be removing invasive species this year,” Bost says.

Some schools and businesses in the United States (US) go entirely waste-free. These schools recycle all biodegradables, grow their own food, and use compost systems. According to Senior Curator of Urban Ecology and Director of the Hefner Museum of Natural History Steve Sullivan, waste-free is just an idea.

“One hundred percent waste-free cannot happen,” Sullivan says. “[But] we can probably get close.”

One way that Folta finds that the school has lacked in its green-initiative is the food waste in the cafeteria. He says if the students and faculty could separate the food waste from the recyclable bottles and trays, as well as any trash such as wrappers, that food could be used as compost.

“They do not check each can to ensure the proper can has the proper contents in it before being dumped into the [dumpster],” Passarge says. “Our [custodians] are on a tight schedule to get their areas cleaned and we have to assume [the] individuals own their responsibility to place the waste contents in the appropriate can.” 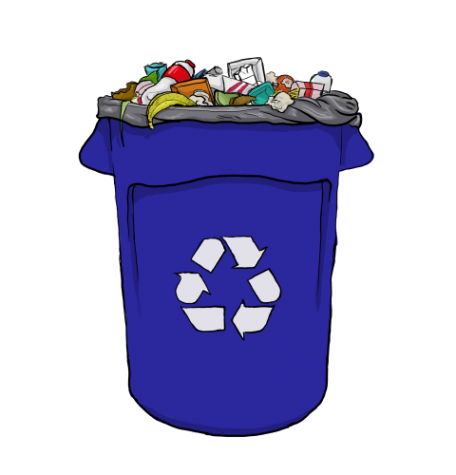 According to a study done by National Broadcasting Company (NBC) in San Diego, it was found that 76 percent of the trash in US landfills could actually be recycled.

“Students use paper trays, which is compostable and biodegradable, but what we could do is have [most] of the cafeteria waste composted,” Folta says. “It’d be a lot of work and coordination. We’d almost need to hire somebody else.”According to Miami University professor of biology David Berg, as a society, people should figure out what their responsibilities are in helping nature. He says that people have to think about how their actions cause reactions to the environment.

Berg uses examples like using plastic bags in the supermarket to show how people choose convenience over being eco-friendly. He raises the question of whether it is worth it to make life simpler for humanity if it is making life worse for the environment. In order to figure that out, Berg says, people need to have the proper environmental education.

“Education doesn’t just have to be about of sustainability, but also about exposure to the natural world,” Berg says.

Berg believes the main cause of this apathy for the environment is children not playing outside. If kids aren’t playing outside and they don’t have the proper education, they may not understand how their actions will affect the environment. “Children have to know what nature is like,” Berg says. “[Children] don’t play outside in streams, they don’t do those kinds of things [anymore]. They don’t know what they’re missing.”

Sullivan has some experience with his past school on learning how to promote recycling. He got to see firsthand what it takes to make a school more environmentally friendly.

“As a child, [my] school separated paper and food from the waste stream. Paper was recycled at a pulp plant, and food was fed to livestock,” Sullivan says. “By removing paper, we removed the bulk of our waste. This means the dump took up less space on the planet and the space it did use lasted longer.”

According to Wallethub, a research website which received their information from various sources in the American Census Bureau, Ohio is ranked number 37 in the country for the greenest state. The criteria for the “greenest state” is air quality, water quality, soil content, mass of recycling, renewable energy consumption, and gasoline consumption. Sullivan found, in his expert opinion, for the statistic to be entirely accurate.

“My own experience in Ohio supports the conclusion as well. Ohio seems to only nominally recycle. For that matter, the US in general is pathetic at recycling,” Sullivan says. “There are many countries that do a better job than any [American] state.”

Bost says that she thinks that people throwing their trash in the recycling has had a negative impact on East’s recycling program.

“[The Administration doesn’t] want to deal with the stress of going through and sorting the trash [from the recycling],” Bost says. “Some people ruin [recycling] for us.”