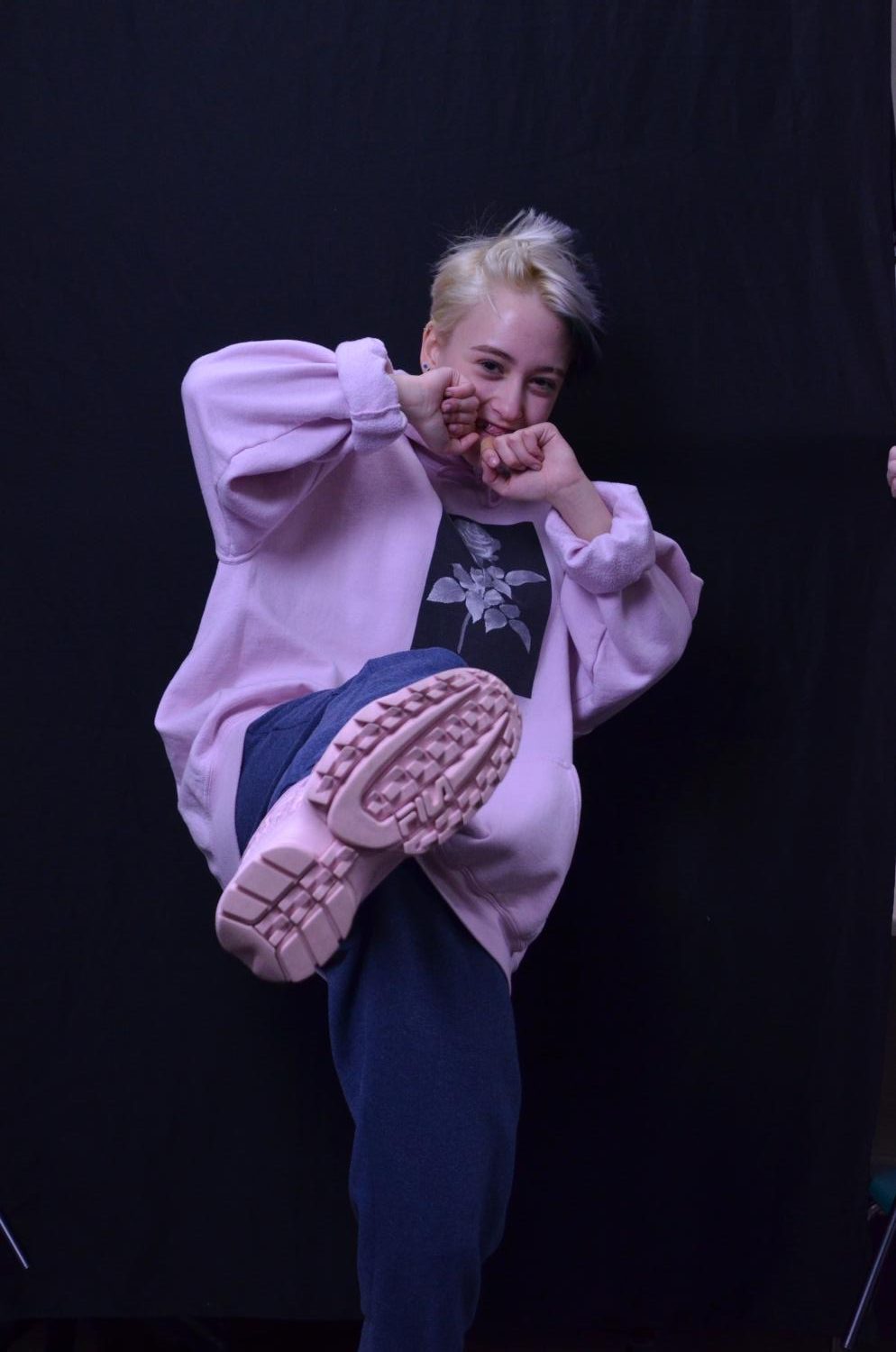 It is fourth period at Liberty Junior High School and dozens of sweaty, awkward eighth-graders fill the gym awaiting team instructions for an upcoming kickball game. A rush of relief falls over the students as the gym teacher announces that the class will be separated into boy-girl teams. But one student, Jiji, is not quite as relaxed by the announcement. For Jiji, the decision to choose either the male or female team is difficult, especially when they feel they are not a part of either.

East sophomore Jiji Mills identifies as nonbinary, meaning they identify as neither male nor female and use they/them pronouns. Despite their experience of this gym class being over two years ago, the memory of the significant moment in their life remains as vivid as ever.

“I made a comment to a friend [that I] I didn’t really know what to do because I’m not a boy or a girl and [Coach Hill] heard and said ‘Oh you can just go [without a team],’” Mills told Spark. “But then he pulled me out of class and said that even though he split his classes [by boys and girls], he wanted to know if there’s a way to make me feel more comfortable.”

For Mills, this simple kind gesture from Hill was the first time a teacher “recognized and respected” their gender identity.

“Coach Hill was the first teacher I ever came out to gender-wise,” Mills says. “He was so respectful and it [was] the most amazing thing ever to me at that point because I had never been treated like a whole human being by a teacher [before].”

But the journey to get to a point of acceptance from adults was a long one for Mills.

“I started questioning in fourth grade, which is really young, but that’s when all my friends were getting crushes and I was just like maybe I should do that too,” Mills says. “I had a lot of LGBT friends, and I [seemed to] really fit in. But [because]I was really young when this happened, a lot of people didn’t really know what it was.”

Mills says that it was later in elementary school when kids “started being mean and that being gay was a funny thing to them.” But when Mills started openly coming out to their friends in sixth grade, they felt that their friends were overwhelmingly supportive.

“I was transphobic in fifth grade,” Riley told Spark. “I was really mean to Jiji about it. But I was able to get over it and now I just accept Jiji for who they are.”

Since then, Riley has involved herself in LGBTQ+ advocacy, making a documentary for a class about the LGBTQ+ community and even helping establish a Gender Sexuality Alliance (GSA) at Liberty Junior. Riley describes how Jiji’s experience has influenced her and her peers.

“It opened my eyes and my mind to things that could happen in the world and not just be in a little bubble forever,” Riley says. “A lot of my peers and I look up to [Jiji]. After Jiji came out they were more open to coming out.”

For the Mills siblings, Jiji’s experience in coming out as non-binary was a seemingly foreign concept. According to Wright State Associate Professor of Sociology Julianne Weinzimmer, many developments in gender identity such as in Jiji’s experience, are relatively new to a lot of Western society.

“[In the last 10 years] there’s been a lot of new research and literature about non-binary and people who identify gender as a spectrum,” Weinzimmer told Spark. “In the last several years, we’re really starting to see that transgender has become inclusive to all kinds of contestational  identities around gender and sexuality.”

According to the Society for the Psychology Sexual Orientation and Gender Diversity estimates that non-binary members make up 25-35% of the transgender population.

Weinzimmer says these recent changes can be connected to generational shifts.

“It’s definitely a generational issue where we see people who are younger [being] a lot more flexible and willing to reconceptualize gender,” Weinzimmer says. “But I think especially for older generations, who have watched us go from a very overtly patriarchal society, everything is being thrown up in the air.”

Jiji says they have noticed how their school environment has changed as more students and teachers have begun to be more open about gender in class.

“A lot of the people who go [to or] teach [at East] are a lot more understanding than they might have been a few years ago when I first started experimenting with my gender identity,” Jiji told Spark. “It’s a different world now and obviously there [are] a lot of people who are still probably never going to accept it. But I feel I’m in a safer environment than [I was] a few years ago.”

East sophomore Cameron Weinrich became close friends with Jiji in eighth grade when he passed them a note through the Liberty Junior cafeteria asking to be friends.  He says that knowing Jiji has helped influence his own mindset on gender and sexuality.

“I’ve known [Jiji] to go through different kinds of [gender] labels and it helped me realize just because I had a label at one point, doesn’t mean I have to stick with it forever,” Weinrich told Spark. “They’ve really helped me figure out my gender identity and I’ve been able to talk to them about what it’s like to be non-binary.”

Jiji describes most of East as an environment that is accepting and understanding of LGBTQ+ students. Still, they believe it is the small things like adding more gender-neutral bathrooms, more gender selections on surveys, and asking a person’s preferred pronouns, will make a difference.

But Jiji believes that acknowledgment and recognition of members of the LGBTQ+ community is a crucial step for all of society.

“In society, I think it would make a lot more people like me and my friends feel better and [safer] if people being queer or transgender was more [realized],” Jiji says. “People don’t have to understand, but just recognize [being transgender] is a thing.”