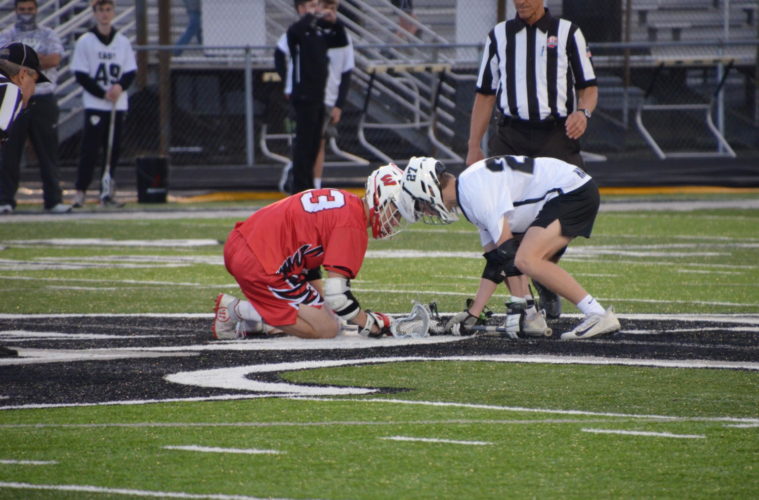 Battle of the Bloodline

As the final seconds run out on the clock, the scoreboard reads five to six. East’s boys lacrosse team loses to West in overtime in week four of the 2021 regular season. This marks the end of one of many relentless battles between the two teams.

In 1997, Lakota High School was split into East and West. This simple decision signified the beginning of a fierce rivalry. Ever since then, athletic teams of both schools have prioritized every match up.

The competition is especially apparent in the schools’ lacrosse programs. The games have been some of the most anticipated and vivacious dogfights in Ohio.

“There’s a very, very strong desire to beat the other school,” says East athletic director Richard Bryant, who knows beating West is one of the school’s top priorities. “It’s one of the goals we have in the athletic department. It’s ‘Beat West’.”

East senior and captain of the boys lacrosse team, Braxton Rich, had one goal and one assist in a 9-8 victory against West in week seven. East Senior Kyle Collet scored the game-winner as time expired.

“West is always the most important game of the year,” Rich says. “It means the most to all of us.”

Mental preparation begins the day the game is scheduled. The team has to stay focused and not allow the amount of pressure and emotion present to overwhelm them.

“I think it’s most important for us to make sure the guys are loose and ready to go,” Rich says. “West games always have the most pressure because the attendance is at its highest and emotions are at their peak.”

“It’s a big thing; all of us want it really badly,” Khounesombat says. “It’s probably the most emotional game of the year.”

The East versus West games are no place for stoics. While boys lacrosse has been dominated by West in recent years, the girls program is another story.

“It’s been pretty one sided,” says Bryant. “Most of the time, on the boys side they have our number. On the girls side, we have had their number.”

East’s girls lacrosse team has been notably successful against West. East has beaten West every year without fail, up until this season when they dropped a pair, 13-9 and 20-12.

East senior girls lacrosse player, Kaitlyn Lattire, scored six goals in the week four game against West. Lattire has reached 100 goals in her high school career this season, and leads the Greater Miami Conference (GMC) in goals this season with 66 in only 14 games, as of week eight.

“Since I came in as a freshman, we had our seniors always telling us that they haven’t lost to West,” Lattire says. “Up until this year, we kept that streak going, still only losing once in the past four years.”

Lattire has been on varsity since freshman year and has played west a total of eight times.

“The atmosphere walking into any West game is definitely very tense,” Lattire says. “My mindset is to just go in and play my hardest. It’s a huge game for us so we all have to make sure we are focused and ready to play. When I walk onto that field, I make sure to give it my all, win or lose.”

“Individual talent always plays a large part in sports success,” says Rick Carpenter who has been an assistant coach at East for six years. “But in order to be a varsity athlete in high school, the amount of effort put forth is typically the main factor.”

West’s girls team has seen a substantial turn around this season, going from 5-12 in 2019 to 6-5, as of week eight. West senior girls lacrosse player Maggie Mullholand, who had one goal, one assist, and four ground balls in the week seven game versus East, has seen the progress first hand.

“The team has phenomenal chemistry this year and we play really well together,”  Mullholand says. “We have learned to trust and respect one another on and off the field.”

This rivalry has been remarkably beneficial for both schools. These teams push each other to improve themselves every offseason, and to bring their best every season.

“When we are conditioning in the pre-season, it’s always ‘They aren’t doing this extra sprint, but we will’,” Lattire says. “We always want to go that one extra step to be better than the other school.”