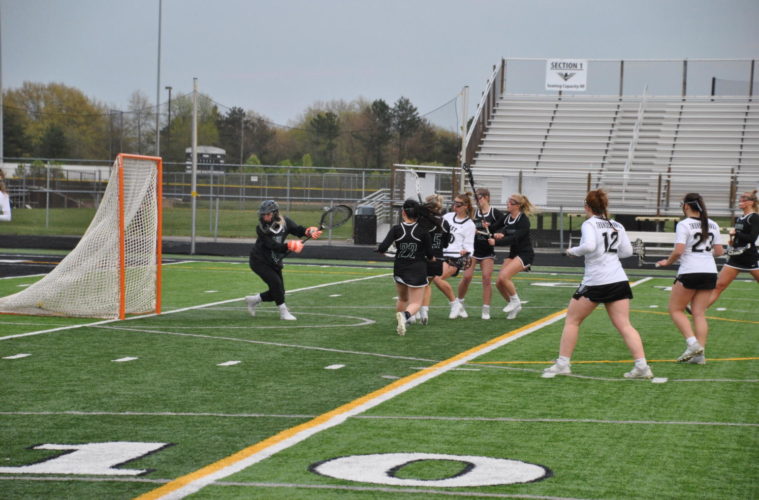 Friday practices for the East girls lacrosse team involve kickball, soccer, tug of war and other team building games. Girls laughing and good-natured banter can be heard echoing around the field. For this team, after losing 13 seniors, building teamwork and cooperation is imperative in rebuilding a dream team.

For East varsity lacrosse captain Kelly Carpenter, her senior season was not at all what she expected. Looking back at the past two years, losing both the upperclassman and a season to COVID-19, as well as a change in coaching staff was unanticipated and rebuilding their dream team has been a journey.

“If you would’ve told sophomore me that the past two years would be like this I would’ve thought you were crazy,” Carpenter says. “Standing there at that senior night knowing this was my last time playing with the upperclassman that I looked up to for so long was such a real moment for me.”

For Carpenter, this moment was impactful because she was not only saying goodbye to a large portion of her team, she was also watching her older sister play her last game knowing that in the upcoming years, she would follow in her footsteps.

Two years later, the East girls lacrosse team persevered and succeeded during their 2021 season. With every game, the team played better and better and got more comfortable playing together.

The first few games they were a “one half team” where they either played a really good first half or a really good second and couldn’t put them together. Now, months into the season, after spending three hours everyday with one another practicing for a common goal, the team is a tight knit family and they now have an eight to seven record.

“Losing the seniors was very hard for our team. Not only did we lose numbers and talent, but in a way we lost the foundation to our team,” Carpenter says. “Those girls led us to being better lacrosse players and better people. For me specifically it was difficult because losing them meant not playing with my older sister anymore.”

Matt Dishun, a long-time assistant to former coach Ken Kinch, who resigned after getting another job opportunity outside of East, stepped up and became the girl’s lacrosse head coach in the 2020 season. His first order of business was finding new players to fill in the large shoes of the graduated seniors.

New players ranging from freshman to seniors attended off season practice in order to learn the game and polish their stick skills. Anjal Jackson, a then sophomore and now junior, started out in the season of 2020.

“The team made me feel so welcomed. They were kind and instantly treated me like family,” Jackson says. “As I have gotten to know these girls they have made me realize that it’s more than lacrosse, we are a family.”

After months of preparation with the date for the first game of the season quickly approaching, one obstacle stood in the team’s path–COVID-19.

When the government officially shut down spring sports, Dishun called each and every player on his roster to have a heart to heart conversation and let them know the bad news.

“Our team always seems to come together pretty quickly,” Dishun says. “We always tell the girls that we are one big family. Families have issues at times but we always seem to put it behind us and move on quickly.”

After the quarantining protocol started to lift, the team jumped right back where they left off.

The problem they were facing now however, was the lack of teamwork and chemistry. Many of the girls did not know each other, coming from different groups and grades. They needed to learn how to trust and depend on each other.

“Team chemistry is everything on a team. You can have really great athletes but if the connection and trust isn’t there, the team won’t succeed,” Carpenter says. “I have played many teams that have had a few great players but have poor leadership and trust. In the end the strongest teams are the ones who can rely on each other on and off the field.”

Varsity senior captain Klohe Kaznowski has been playing lacrosse for six years. Using her experience and leadership, she helped develop the new player’s individual talents and teach them how to utilize each other on the field.

“The seniors were a large portion of the team [which] meant we lost a lot of experienced players,” Kaznowski says. “When you add that to a missed season in 2020, there was a lot of work ahead of us to build and develop our talent and skill sets within the team.”

East alumni and varsity goalie Abbie Urick, was a 2019 graduate who had been playing alongside her teammates for years, creating a strong bond that led them to a winning season.

“Many of us had been playing together since middle school, so it was natural to know what someone was thinking, it was that built up trust,” Urick says. “Through the bonds we created we became a very tight knit family. We had people that we could trust and rely on and that made us more willing to fight for a win because no one wanted to let each other down.”

That required the underclassman to gain experience.

“Missing our season last year obviously left a gap with our team bonding experiences. When you practice and play together you naturally bond as a team and we didn’t get that opportunity last year,” Kaznowski says. “ We started the season this year with a big sis and little sis partnership between upper and lower classmates to help us bond. It takes time getting comfortable with each other and identifying and understanding the different strengths each one brings to the team.”

“I believe what makes a team great is no matter how your season is going, you don’t give up. There are always ups and downs with winning and losing and players being injured,” Dishun says. “It’s not always about how talented you are or the team is. It’s about having the heart and desire to want to do your best every time you step on the field.”