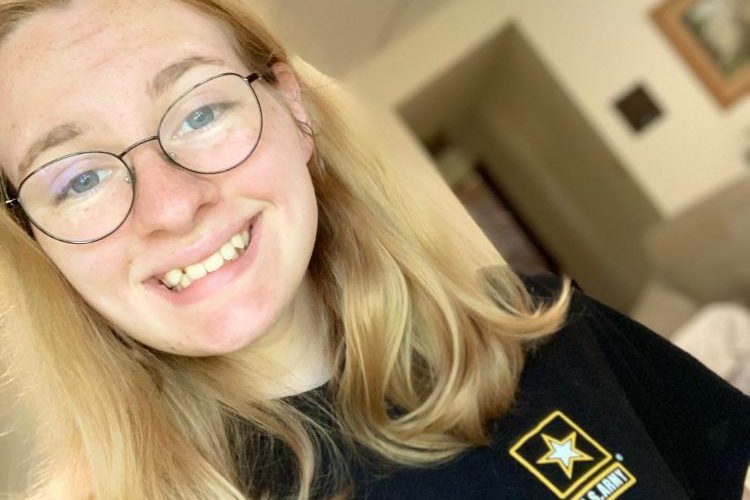 Things were falling into place perfectly. She spent her last years of high school working past the hardship of taking a different route than her peers, and was confident in what she decided to do with her life post high school: join the military.

East senior Abbie Arkwright had never hesitated on her decision to pursue the army, but deciding which branch she wanted to go into was a question of what and why. Arkwright liked the multitude of options and the opportunity to fulfill dreams she had always wanted to pursue, so she committed to the Military Police in December 2019.

“I decided [Military Police] was the best route to take because at one point I wanted to be a police officer and I didn’t know how to go about that,” Arkwright told Spark. “[Being a part of the Military Police is] similar to a civilian police officer and some get deployed [to different locations] because the job involves getting people from one place to another safely.”

Brent Arkwright, Abbie’s father, strongly supported her decision to pursue the military, as he had been in the Army, and knows she will do well in that atmosphere.

“[Abbie] follows directions very well, and she is motivated to do whatever she needs to,” Brent says. “The military will help her learn how to become a leader as opposed to a follower.”

The preparation for the upcoming changes in her future was filled with physical workouts and spending time with her recruiters who have become more like family. During the process, Abbie gained friends in the army and people to relate to. But suddenly, her seemingly perfect senior year started to fall out of place as the coronavirus hit Ohio.

“[COVID-19] made me unsure [about the future] because I can’t get myself as ready as I could have [before COVID-19],” Abbie says. “All the gyms are closed and I can’t go to my recruiter.”

Some of Abbie’s friends in the army who just got done with training are stuck at their location in training because it is uncertain if it is safe to move them to a new place.

“Officials are trying their best to get people where they need to be, but like the rest of the world, everything has come to a stand still,” Abbie says.

While many things are unclear, Arkwright’s current plan is to go to basic training in Missouri at the beginning of August, even if things are far from normal. Adjustments with getting more recruits and new health regulations must be followed due to the virus, but she feels she has to go into the army without additional fears.

“While I was most looking forward to graduating high school,” Abbie says. “Moving forward I’m just excited to finally be in the service, travel, and get a degree ( teaching] while I’m working.”