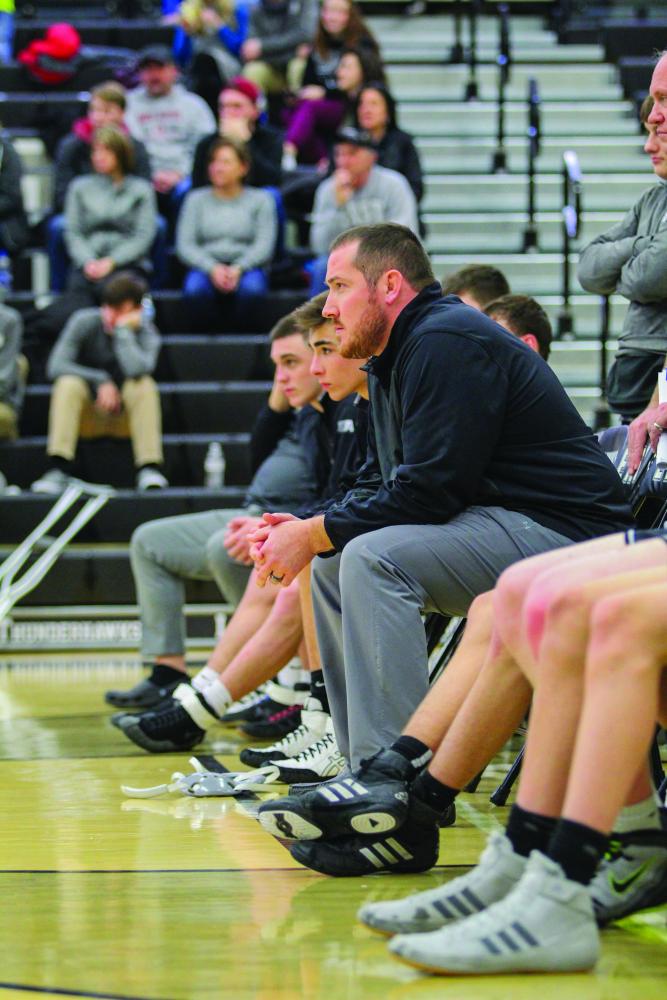 The East Wrestling team gathers inside the weight room for their first day of summer workouts. The room is filled with excitement as the team begins their off-season grind, but a sense of uncertainty also fills the room as newly hired coach Chad Craft will spend his first day with the team.

What the team did not realize at the time was that Craft would immediately make an impact on the team. His unique coaching style has established a new attitude. He led the team to a third place finish at the 2019 Greater Miami Conference championship meet, which is an improvement from the 2018 season, in which they finished eighth.

Craft, who saw East wrestlers Alex Epstein (138) and Aaron Sharp (285) win a GMC title, was hired as East’s head wrestling coach in the spring of 2018 after coaching for four seasons at Little Miami High School. He replaced long-time coach James Lehman who stepped down at the end of last season.

“Overall we wrestled really well, and the team came together at the right time,” Craft says. “We had two [GMC] Champs, which has not happened at East for a long time.”

It is obvious that Coach Craft has a strong passion for what he does, and he provides the perfect spark to be able to lead the East wrestling program. He fully embraces the challenges of coaching and hopes to help the team achieve its goals.

“My favorite part of coaching this team is being able to help the East wrestlers become better young men,” Craft says. “Our goal is to have all the individuals on the team to work as a whole, and win as a team.”

Wrestling is a complicated and time-consuming sport that requires wrestlers to put in the maximum effort both on and off the wrestling mat, and implement other forms of exercise, such as running and weight training. Craft strongly emphasized this, adding that there’s a lot more to the sport than what happens on the mat.

“My staff and I take many steps to ensure that our wrestlers are in peak physical condition,” Craft says. “This includes working out multiple times a day, having a disciplined diet, and getting plenty of rest.”

Not only was Craft excited about the new coaching opportunity, but many of the wrestlers were confident in him from the very beginning. East sophomore and wrestler Eli Willis, who wrestled the previous 2018 season, had high praise for Craft, and was amazed by the impact he had in just his first season at East.

“What he did for the East program in just one year is drastic and he continues to push us to be better,” Willis says. “We have been working harder than ever to get ready for GMC’s and Sectionals.”

Willis also added that coach Craft possesses many qualities that make an outstanding coach, including selflessness and a great ability to lead such a large program.

“He is the type of wrestling coach I would want for the rest of my high school career,” Willis says. “It doesn’t matter what type of athlete you are, he will still put all of his effort into making the team better.”

East sophomore and Wrestler Max Pennix, who, like Willis, also wrestled in the 2018 season, mentioned how many members of the team admire Craft because of his great amount of selflessness.

“He understands how to work with the entire team as a whole, while still focusing on individual wrestlers and making them better as well,” Pennix says. “He genuinely cares about us as individuals.”

After two very impressive third place finishes in the Greater Miami Conference (GMC) championship meet and Ohio High School Athletic Association (OHSAA) sectional championships, Craft hopes to add to his success in his first year as East head coach. Regardless of the outcome, what Craft did for East wrestling in his first season was extremely impactful, and he hopes to take the program to even greater heights in the near future.

“I haven’t coached many teams with this much natural talent, but I also haven’t coached the type of kids who were looking for a coach that cared about them,” Craft says. “It took a while for them to buy in to what we were doing, but when they did, they started having great success.”