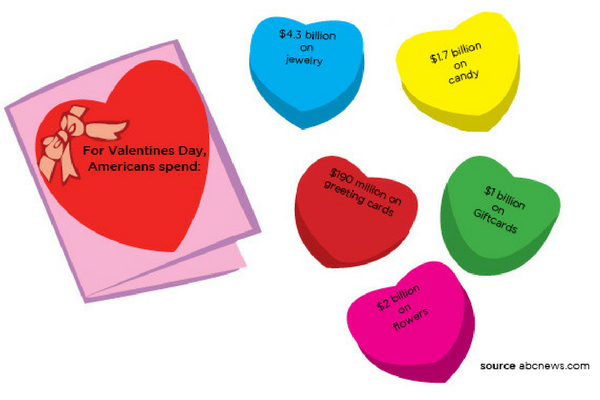 For the Love of Money

Valentine’s Day has rolled up just like it does every year. Store shelves are full of pink and red packaging. People are worrying about what to get for their partners and what their partners are going to get them.

The emotions of Valentine’s Day seem very natural to Americans across the country and to the students of Lakota East. In a recent Spark Twitter survey, 79 percent feel that Valentine’s Day has become more commercialized. Plus, Americans are expected to spend the near-record annual spending for Valentine’s Day is $19.6 billion, according to a 2018 National Retail Federation report. However, one East student feels different about this holiday.

East junior Alyson Hamilton doesn’t favor what Valentine’s Day has become. She says she feels like the holiday has become a competition of who can buy their partner the biggest present, rather than actually showing how much they care.

“Listening to someone and showing how much you care is the best way to show affection,” says Hamilton. “[It’s better] than buying a giant teddy bear.”

The roots of the holiday come from the pagan celebration of Lupercalia. According to a 2017 University of Chicago report, this was a Roman fertility festival dedicated to the the Roman god Lupercus where men of the Luperci, an order of Roman priests, would sacrifice a goat in offering to the god.

East Latin I and Advanced Placement Latin teacher Sarah Elmore says that the way the Romans celebrated the holiday “was no different than any other holiday” because the practice of sacrificing animals was very common.

After sacrificing the goat, the Luperci would take strips of the goat’s hide and dip it in blood. The strips would then be used to gently whip women and crops in hopes of making them more fertile.

East senior and Latin club co-council Elaine Suer says that the whipping was supposed to make the women more fertile and the crops bare more fruit.

She says that “what really struck me about the holiday was the fact that the women voluntarily stepped in front to be whipped so they would be more fertile.”

Lupercalia was celebrated until it was deemed “un-Christian” at the end of the fifth century when Pope Gelasius declared February 14 as St. Valentine’s Day.

Since the proclamation of Valentine’s Day as it is known today, Hamilton feels that the holiday has evolved into a day about buying cards and teddy bears and is therefore a “Hallmark Holiday.”

However, East junior Catie Lincicome feels the opposite of Hamilton on the subject of Valentine’s Day. She feels that the day gives people a chance to appreciate loved ones and that this is not done enough.

“I feel like people get caught up with their lives,” says Lincicome. “But we should have a day where we can sit down and tell someone that we appreciate them.”