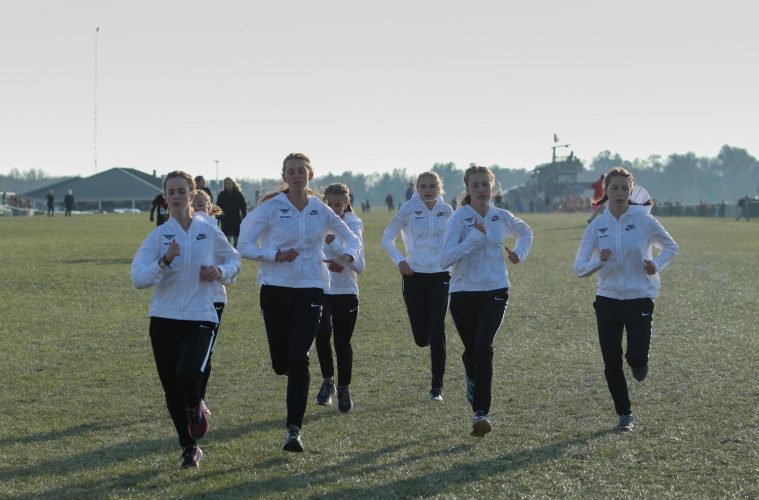 story and photography by rachel anderson

Everything grows silent. The cheers from the crowd are far away and it seems as if the starting gun will never fire. The nerves keep building as the East varsity runners try to stay calm as they take their final deep breaths before the race starts.

The starting gun’s loud boom is barely heard as all of the fans’ screams reach the runners’ ears. The most intense part of the race has begun as the 183 girls fight to take the lead while the grass course funnels the girls into a narrow straight-away.

The East runners’ nerves fade away and they focus on what they are here to do. What they have trained six months, seven days a week, to do something no other East cross country team had done before.

The East varsity girls’ cross country (XC) team ran hoping to win first place for a state title at the National Trail Raceway in Hebron, Ohio at the OHSAA State XC championship race. This was the team’s third consecutive year running at state and the girls hoped to place better than last year’s 5th place finish.

East ended up getting second in-state out of 20 teams. Beavercreek won first with 51 points, placing four runners in the top nine. Their fifth runner placed 56th overall but 36th among scoring runners. Beavercreek had the number one and number two runners overall: senior Taylor Ewert was first with a time of 17:22.5, and senior Savannah Roark finished second with a time of 17:48.6.

“We were hoping for that state championship… and then Beavercreek just ran so tough at state that I don’t think anybody was going to beat them that day,” East cross country coach Adam Thomas says. “I think [the East girls] were still pretty happy with the second place.”

“This year I felt different about racing. I felt more excited and I had a lot more fun this year,” Oberhaus says. “And even in the regular season racing, I was improving my time so I was really proud of myself because I was in a good place mentally about racing.”

While East missed the state title by one spot, state runner-up is the highest place any cross country team has won in East history. No one on the team was disappointed in how they performed.

“When I finished, I was over the roof,” Oberhaus says. “We were so proud of what we did.”

Prior to the race, Milesplit, the premier site for national tracking of high school cross country and track teams, predicted East would rank in third place, right behind Hillard Davidson and Beavercreek. However, Hillard Davidson ended up placing third behind East .

“One of the biggest reasons [East] was second that day was because they were running to win,” Thomas says. “The fact that they were chasing Beavercreek, who ran so good that day was the reason why they beat all those other teams.”

Only the top 20 individuals make it on the podium. The highest place East earned was 25th.

“[Becoming state runner-up without placing anyone on the podium] shows that we all work really well together. It shows the depth of our team,” Horter says. “If one person were to fall off, somebody else can pick it up for the team. We all trust each other a lot and we can depend on each other.”

Harris believes that placing no on on the podium shows the depth and strength of the team.

“It shows that when you have a huge pack like us that all runs together, you can still do really well,” Harris says. “You don’t have to have that one person up in the front to get you a low point.”

All seven girls plus the 2019 state alternate, sophomore Sarah Renfro, are on East’s list of the top 20 fastest runners in school history. Harris is second on the list with a time of 18:23.7. Horter is number four, Spletzer is sixth, Willis is eighth, Oberhaus is ninth, Reynolds is tenth, Wilson is 12th, and Renfro is 17th.

“Next year I’m hoping that I’m not going to be the alternate anymore,” Renfro says. “At the beginning I was intimidated because coach wanted me running with the other top seven girls, but throughout the season I got more and more comfortable with it. Running postseason with all of [the varsity girls] has shown me my potential.”

According to several of the runners, the dramatic drop in ranks wasn’t due to running personal records. It was a result of experience, leadership, and confidence.

“Last year, I’d never been at state and I didn’t know how it would go,” Wilson says. “So this year  I had more experience and I knew what to expect and how to run at that level.”

For Spletzer, this was the first year she was not injured during post season. In 2017, Spletzer had a fibula stress fracture but was still able to run at state. In 2018, she had multiple stress fractures in her tibia preventing her from being able to run postseason.

“I didn’t get to run any of the big meets [last year]. This is my first year running all of the postseason meets,” Spletzer says. “I think [I improved from last year by]  just being smart with training, not overdoing it, and stretching.”

The East runners have a very specific training regimen to prepare them for the postseason. Every week throughout the regular season consists of one long run, two speed workouts, one or two recovery runs, and one or two mid-distance runs. The highest mileage the girls reached this season was ten miles. The week leading up the state meet is when they taper and lower their mileage so their legs aren’t sore during the race.

At the beginning of the season, Thomas knew this team was different than the other teams he coached because of their confidence.

After the state meet, East went on to compete in the Nike Cross Regional (NXR) Midwest meet on Nov. 16. The best teams from Indiana, Illinois, Ohio, Michigan, and Missouri ran in the Championship race with the hopes of earning a spot in the top two to automatically qualify to Nike Cross Nationals (NXN) in Portland, Oregan.

East placed sixth at NXR out of 31 teams with a score of 235 points. Beavercreek won second with 112 points and automatically qualified for NXN.

“It was a great way to end my high school [cross country] career here at Lakota East,” Horter says. “I’m really proud of the team and everything we accomplished. I can’t wait to see what else they accomplish.”