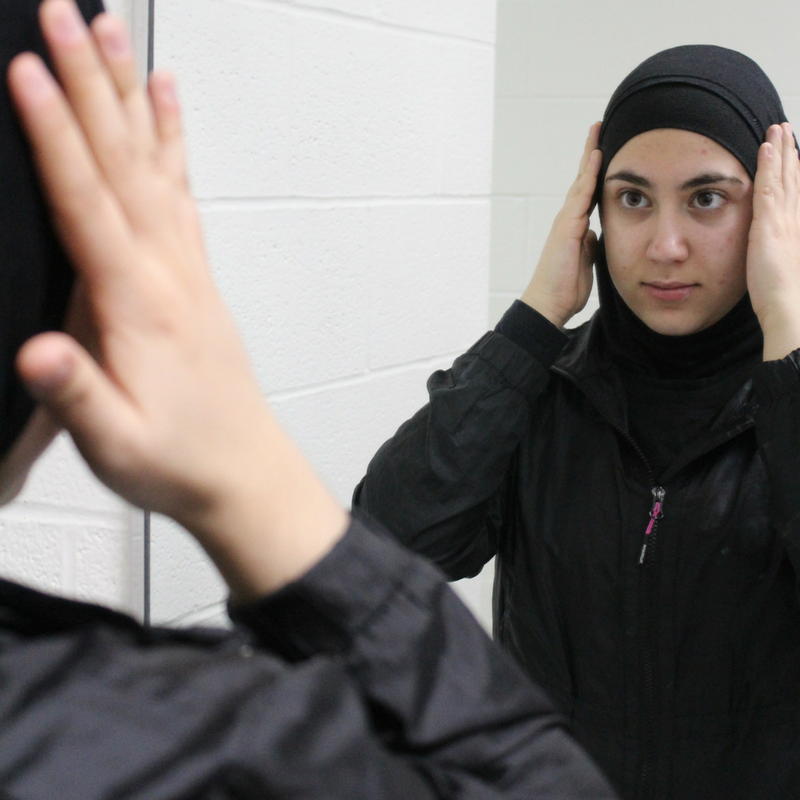 Walking through the doors of a grocery store, strangers would eye her from aisle to aisle. Their eyes linger a second too long at her hijab, but the reassurance of her inner thoughts put a smile on her face as she keeps on moving.

For East junior Zaynab Darwiche, wearing a hijab doesn’t come as a burden and doesn’t provide any negativity that others may surround it with. Instead, it ties together her everyday life; religion and fashion choices all into one decision she made.

Choosing to adopt her hijab at the age of eight to further her expression of religion wasn’t the only change she would soon endure. Along with this, in the eighth grade she moved into the Lakota Local School District from the International Academy of Cincinnati.

“I transferred from an Islamic private school, so everyone that went there was like me. Muslim and foreign. Almost no one was white,” says Darwiche. “So obviously coming to Lakota was a big shock because even though I had grown up in West Chester, I never had that much experience with white people.”

The differences that Darwiche noticed when changing schools laid in areas such as lack of diversity and variety in dress but they had no effect on how Darwiche thought of her newfound peers.

“Dress was also different because at my old school we had a modest uniform based on Islamic rules,” says Darwiche. “So coming to Lakota [and] seeing people wear all these different clothes in varying forms of modestly was different from what I was used to but I’m not one to judge people on what they wear so I didn’t care at all.”

Inside the walls of East, guidelines to the dress code in which accommodate religious wear are placed. According to the 2017-18 Lakota East Thunderhawk Handbook and Planner, “head covering and sunglasses should not be worn inside any building. Head coverings worn for religious reasons shall be permitted.”

East junior Chloe Huggins feels that East has allowed her and her peers to feel like they are able to freely dress themselves in comparison to other schools along with the religious purposes that students have.

“In the morning, I am able to wake up and not worry about what I have to wear and [what people] think,” says Huggins. “East is pretty lenient on clothes as I have never been dress-coded for my outfits yet either.”

Assistant Professor at the Fashion School in Kent State University Lauren Copeland says that dress codes reflect how a certain part of society is or how the society as a whole is in terms of beliefs and standards.

“Dress codes are often a reflection of that progression or limitation,” says Copeland. “There is often fear of making bold statements and progressing too quickly with ideas and mass changes to the overarching thought processes of a society.”

With the belief of breaking down stereotypes of women’s fashion, Copeland holds the ideas in which express fashion standards drawing into controversial conversations held by society.

“I believe the stereotypes of women’s fashion are continuing to be broken down and there is a movement of more individualized expression and acceptance regarding fashion standards based on gender,” says Copeland. “This is happening as our society continues important conversations regarding gender, identity and diversity among all people.”

The given conversations can narrow into topics such as religious wear between gender, which Religion and Gender Studies Professor and Chief Departmental Advisor at Miami University Liz Wilson specializes in. Furthermore, Wilson says that assumptions are made when one who is wearing a particular religious article of clothing.

“It’s one of those things where people make all kinds of assumptions when a women dresses modestly,” says Wilson. “The assumption is [when] people think she is a follower of her husband, her father or that she is submissive.”

Wearing a hijab allows Darwiche to represent her religion in a positive way, not only by having a optimistic outlook but also being open to talk and explain to anyone who asks. Darwiche’s friend and East Junior Hanane Amlal says that she uses her positivity to lighten any mood around her.

“Zaynab exemplifies modesty in what she wears and how she speaks,” says Amlal. “She is a positive person and so blatantly spreads positivity among other people.”

According to a 2007 article from Fresno Pacific University, dress codes are used in order to teach students what is and is not acceptable in the workforce. But it also teaches these students that in the real world, there are dress codes in the workplace.

After living in Germany and then coming to the United States (U.S.), East junior Lena Schwarzer says that in her school in Germany, “we don’t have a dress code but everybody knows that it’s respectful to be aware of what you wear and not show too much skin.”

When Schwarzer came to the U.S., she expected to come to a school where she wouldn’t be allowed to wear jeans with holes, shorts, short or skinny dresses or cropped tops. Then, on the day before school started, she talked to a counselor about the dress code at East.

“She told me that I could basically wear what I want but cropped tops and really short shorts aren’t allowed,” says Schwarzer. “I [am] just grateful that I am allowed and have the opportunity to express [myself] and have my own style because it’s definitely not self-evident all the time.”

Assistant Professor of Global and Intercultural Studies at Miami University Jennifer Cohen says that there is always a double standard when it comes to dress coding women and one way or another something will get judged negatively.

Aside from the double standards and negative perceptions drawn from experiences in which women endure, Cohen says that norms are in place that have no positive connotations tied along with it.

Overall, the perceptions and assumptions developed by dress codes based of off gender, religion and any other defying factor has the potential to take a toll on anyone. Along with the defying factors in which Darwiche faces, according to Amlal, her “bubbly personality” enables her to defy the odds.

“You have to live with [the hate] and try to educate people,” says Darwiche. “There is nothing else you can get out of it.”