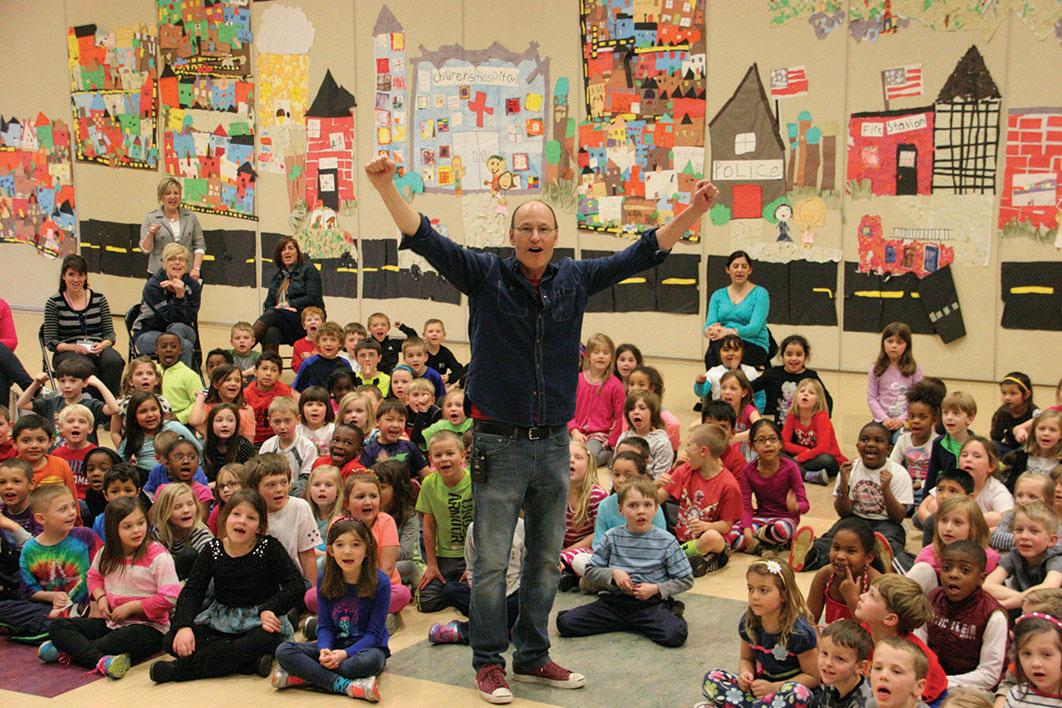 The blue engine in “The Little Engine that Could” has taught children and adults alike to persevere since its publication in 1930. Little did author and illustrator Loren Long know, when his mom told him to “remember the little blue engine” as he practiced his baseball swing in the hole of the little league dugout, this classic by Watty Piper would change his life.

Long chants the familiar phrase of the little engine to eager children sitting on the cafeteria floor of Wyandot Early Childhood Center on March 25. With hands waving in the air and little bodies unable to sit still from excitement, these kindergarten and first grade students look up to Long as a hero. Not only does he inspire them with his books but also with the loving words and personal attention that he strives to provide for each child.

Long assures the children at his feet that they can achieve whatever they set their minds to doing. At the end of his junior year at the University of Kentucky and after four different majors, Long decided to become a professional artist. Taking every art class possible, he wasn’t sure if he could make a living off of his work. While his mom had always called him “the artist of the family,” his dad was also supportive, but on the quieter side.The words his dad did speak, however, gave him the confidence to pursue his dreams.

“I said, ‘Dad, I think I want to be an artist for my living—an illustrator like Norman Rockwell,’ because I knew my dad knew Norman Rockwell,” Long tells Spark. “He was real quiet and said, ‘Well, son, I’ve been in sales with the U.S. Gypsum Building Supply Company for 25 years, and it’s been a decent way to put food on the table for you and your brothers, but I’ve never woken up once in those 25 years passionate about drywall. If you could find something that you love and you’re kinda good at it, it’d be a good way to go.’”

After graduating from college, Long spent time at the American Academy of Art in Chicago before his first job making greeting cards. Eventually becoming a freelance illustrator, Long worked for major publications such as Sports Illustrated, TIME, Reader’s Digest and Forbes. Years passed before he illustrated his first picture book, called “I Dream of Trains” by Angela Johnson.

Running a marathon to complete his work with time and precision, as he did with picture books such as Madonna’s “Mr. Peabody’s Apples” and President Barack Obama’s “Of Thee I Sing,” was more suiting for him than the sprint that was involved in finishing immediate work.

“It’s important for young people to know that I didn’t find my life’s work until I was 39 years old,” says Long. “I was illustrating all those years, but I didn’t do my first picture book until I was 39. Doing a picture book changed the course of my life. All of a sudden, my art had meaning. The best that I could hope for is that one of my books becomes a friend to a little person out there in the world.” 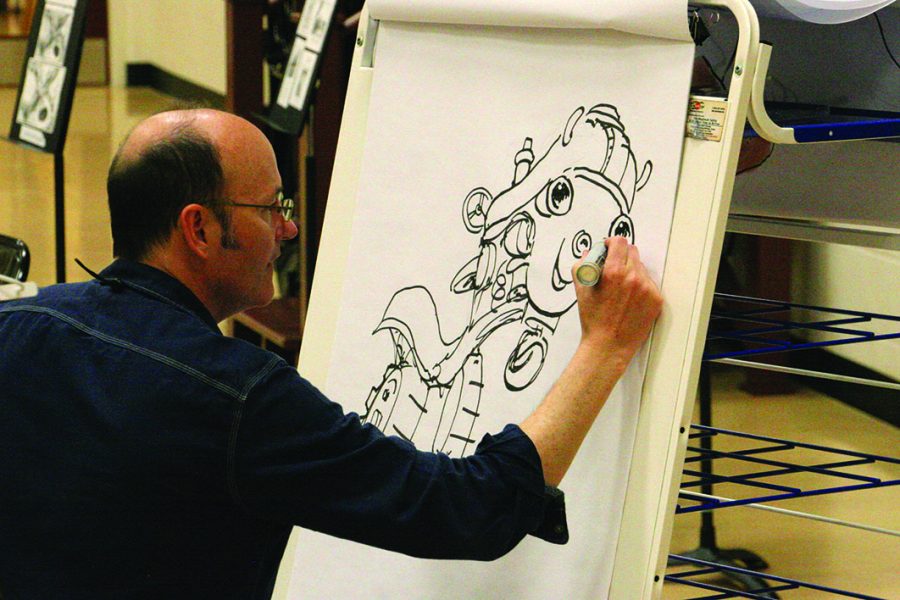 Long draws Otis the Tractor for the Wyandot students. Photography by Sydney Rader

But he didn’t stop here. Long has been chugging on, writing New York Times best-selling books such as the “Otis” series. Loren has written and illustrated a total of 25 books, and is finishing his new book, “The Little Tree,” which he read to the Wyandot children and is to come out to the public on October 27. A deep story about a young tree that is afraid to lose its leaves, the simple plot about growing up teaches readers of all ages an important lesson about living.

Other students gathered around Long after the presentation shouting the individual ways the story made them feel. They exclaimed, “Animals helped out and said, ‘It is time to drop your leaves.’ Friends and family help me when I am scared,” and “Little Tree became brave like I have become a bigger and stronger reader.”

Long is excited to see the continuous impact that this picture book will have on the culture of literature.

“Little Tree is a book that I wrote in my own little pea brain head,” says Long. “I dreamed the idea that it can be a book for the ages.”

While Long was working to forge a path for his career, he was also working to fight for his family. Twelve years ago while he was illustrating a new rendition of “The Little Engine that Could,” his mother was diagnosed with breast cancer when she was 65 years old. The Long family was struggling with a new kind of battle—one that was different than any fast ball racing toward home plate.

“I remember telling mom that by the time [The Little Engine that Could] is published, she’d have climbed her mountain,” says Long. “It made me realize how fragile life was, and that was why I dedicated it to my mom—someone who knows something about climbing mountains.”

While visiting Wyandot, this local author and illustrator was a man on a mission. Every presentation he attends is different and personal, but this one was special to his heart—all of the money raised by the school for his visit went to the Leukemia and Lymphoma Society (LLS).

LLS raises funds for blood cancer research. Annually, the charity holds a competition for the man and woman of the year who come from 10 candidates raising money in a 10-week period. Among the honorees this year was Jason Weiner, who is Loren’s neighbor.

“Jason is one of those people that are in their forties that takes care of himself,” says Long. “He’s fit, trim and kind of a muscular, athletic guy, and I learned that he nearly died because he was at a pretty advanced stage of this blood disease.”

Nine years ago, Weiner was diagnosed with Non-Hodgkin’s Lymphoma. After connecting to the LLS local chapter, he decided to take part in the campaign in which the 10 competitors raised over $770,000 for cancer research. Weiner is now cancer-free and looks at life in a new light.

“Loren is an amazing guy with an amazing career, and he’s extraordinarily generous,” says Weiner. “He jumped on board with this campaign and was a huge part of it. He designed the shirt and did the school visit and was incredibly involved. He’s kind of like the glue that brought everything together.”

As he stands in front of the Wyandot students, Long chants with a room full of supporters, “Jason Weiner for LLS Man of the Year!” This inspiring man came to teach children about his books, but left teaching them a different lesson about life.

“We love that Loren reached out in this way to help a friend in need,” Wyandot Principal Mary Brophy tells Spark. “It was an amazing way for our Wyandot community to give back to the larger community and gain so much ourselves.”