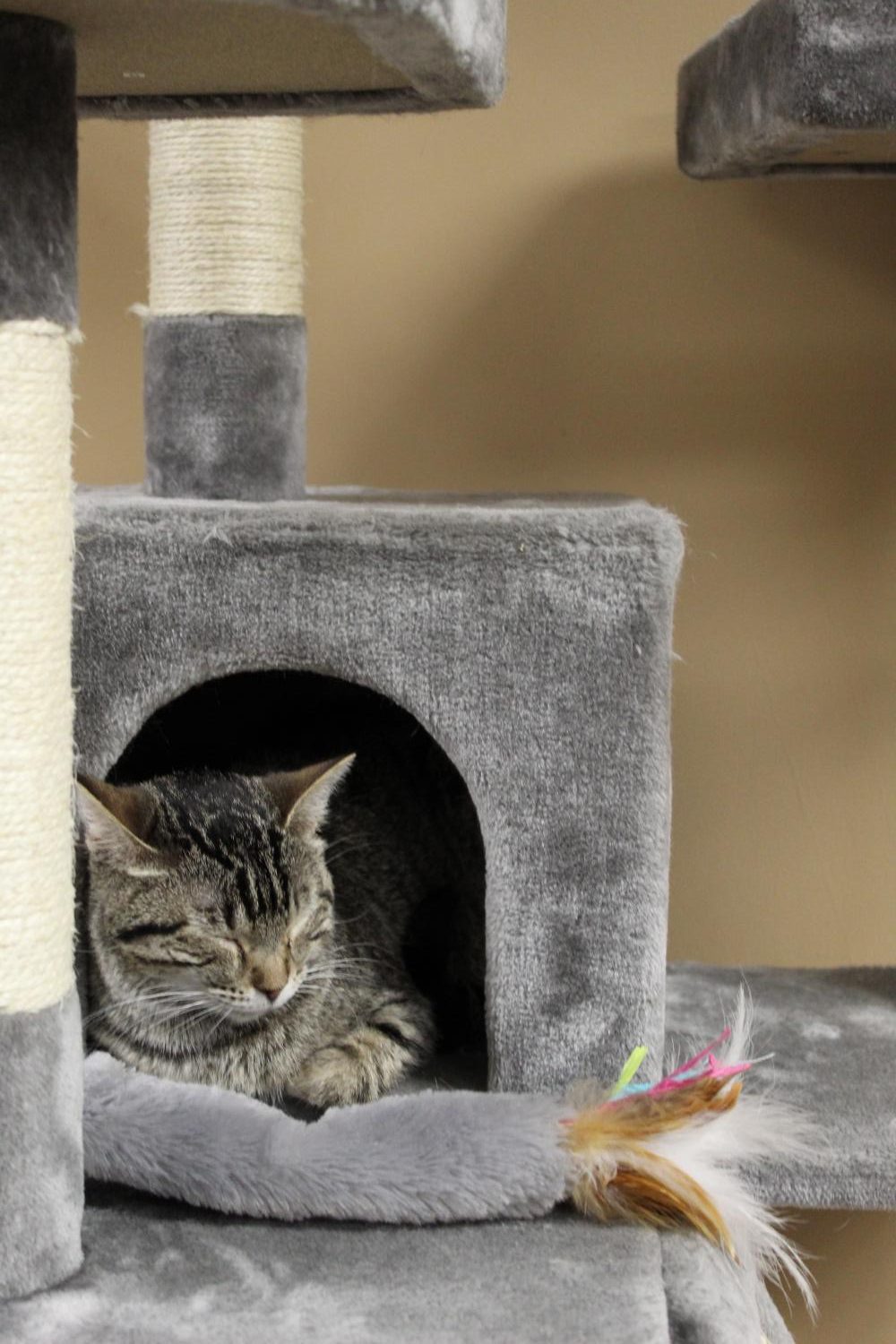 One Cat at a Time

Across the entire room, cats can be seen playing, sleeping, and perking up their whiskers. In one corner, small girls held out a pink feather wand toward a tiny calico kitten and giggle as the cat makes a vain attempt to pounce on it. Not too far away, an adult black cat curled up on a burly man’s chest, snuggling up to him and letting out a long yawn.

All the sights of the room washed over her in a tidal wave of joy the moment East freshman Keira King opened the doors of Kitty Brew Cafe, a cat cafe based in Mason. Everywhere she looked, she was met with a smiling face.

“It was really cool because before I only thought cat cafes were in Japan,” King says. “Then I heard about [Kitty Brew Cafe] and I thought it was a really cool idea and an excellent way to give the community a way to have fun with cats and really connect with them.”

What started as a small idea to create a local cat cafe was kickstarted into reality in April of 2017 by Kitty Brew Cafe’s owner Jenni Barrett.

“I used to watch ‘Shark Tank’ every Friday night, and a young lady pitched a cat cafe idea to the sharks,” Barrett says. “I was already [working with cat] rescue at the time and I thought this would be a good idea.”

From October 2015 to April 2017, Barrett was repeatedly shot down when she brought up the idea to loan officers and landowners, yet she persisted. During this time, she worked on creating a business plan, financing, and finding a location to open the cafe. Zoning was a struggle for Barrett. Each potential city had different qualifications for having animals within the building. This made it difficult to pursue the idea.

“Mason is great because you just have to find a building where the neighbors in the building are okay with you having animals,” Barrett says. “I found the perfect place since the owner was okay with [the cats] and all the other businesses [were as well].”

Another large obstacle Barrett had to face early on was getting a loan from a bank in order to do a build-out, get plumbing, and other utilities necessary in order for the business to get started on the right foot.

“We finally found a bank where the loan officer had actually worked for the Small Business Development Center (SBDC) before she got into banking,” Barrett says. “She thought it was a great idea and she signed for us to get the loan.”

Once the basis of the idea was set in stone, Barrett had to get a few certifications before she could open her doors. Along with a food service license and mandatory fire department and health department inspections, she had to make sure the cafe side was separate from the cat lounge, in accordance with US health laws.

Kitty Brew Cafe is partnered with four different animal shelters: Animal Friends Humane Society, Paws Cause, Hart of Cincinnati, and Hands Extended Sanctuary. The cafe acts as a foster home for a selection of cats from each organization, where they are fed and given socialization with humans.

In addition to the shelters, the cafe is occasionally given cats to foster by Interfaith Hospitality, an organization that allows people experiencing domestic violence or temporary homelessness to keep their pets with them instead of selling them.

“We’ve had three foster [cats] from them,” Barrett says. “We keep [the cat] until their owners complete a program to secure their housing.”

Other than those few fosters, each cat at the cafe is able to be adopted and brought home by any guest when they visit the cafe.

“When you adopt a cat from us, you are essentially saving three cats,” Barrett says. “You’re taking one home, and then I can call the rescue and tell them that we have the spot for another one [in the cafe]. [The shelter is] then able to pick one off the street, or if somebody has fallen on hard times and needs to surrender their cat, the [shelter is] able to help them.”

All the fees obtained in the adoption process of a cat are given back to the shelter that the cat came from to further support the shelter. Because they do not keep these fees, the cafe makes its revenue solely from its $10 entry fees and the pastries and drinks sold.

At a time, there is a maximum of 32 cats allowed in the cafe. However, this number is flexible depending on how well the cats get along with each other. Additionally, only 20 guests are allowed in the cafe at a time to ensure the cats do not get overwhelmed. The admission fee to get into the cat lounge pays for one hour so that more people are able to spend time with the cats.

In order to run the business from day to day, Barrett hired seven employees in total to help her out. During a usual week, only two employees are needed to keep Kitty Brew Cafe up and running. Over the summer and on weekends, when the cafe is much busier, three or four employees, as well as several volunteers, are needed to take care of the cats and keep everything as clean as possible.

Chelsea Joy was one of the initial employees at the cafe. She worked as a cat attendant at first, making sure all the cats and visitors in the cat lounge were comfortable. Soon after, she became a barista for the cafe side as well.

“I saw [the cafe] on a Facebook ad when they were looking for people to do interior painting,” Joy says. “I wanted to work there when I saw that. And now I’m the manager. I help out the owner in doing things like inventory and making sure my co-workers are all working together as a team and making the best things happen.”

Cooperatively, Joy and her co-workers created the recipes and names for all the drinks served at the cafe. Many of the drink names are puns on cat breeds, such as the “Tortie,” which is a blend of coffee, Ghirardelli Mocha, and peanut butter.

“We try to have things that are a little more unique [as well as] classic favorites,” Joy says. “[That way,] everyone can find something they’re looking for.”

According to Barrett, many of the ingredients used to produce the drinks, such as coffee beans, are roasted, fair trade, and organic in order to promote sustainability whenever possible.

Especially in the beginning, when the cafe first opened, it was a bit of a struggle to bring customers into the small business’ doors. As this was the very first cat cafe to open in southwestern Ohio, many news stations were covering their opening. Nowadays, word about the cafe is spread mostly by word-of-mouth from returning customers.

Even today, the small business struggles with many things pertaining to income and keeping customers hooked. To help with these problems, the cafe occasionally holds special events for customers to attend both on-site and off-site.

“We do yoga, movie nights, and other various off-site events,” Barrett says. “You always have to try new things to see what works and what doesn’t.”

In the future, Barrett hopes to expand to more locations and partner with more local animal shelters in order to take more cats off of euthanasia lists and off the streets. In addition, she wants to educate people on the importance of spaying and neutering.

Marketing and Communications Manager for Cintrifuse, a local business dedicated to helping small startups, especially tech-based ones, thrive in their community, Kathryn Prigge believes Kitty Brew Cafe has the potential to make a large impact in the area.

“A unique business idea like this can help drive traffic and excitement in a community,” Prigge says. “When small businesses succeed, communities thrive.”

That is not to say an impact has not already been seen across Mason and its surrounding communities.

Kitty Brew Cafe, within its nearly three years of operation, has given more than 1800 cats forever homes and changed the lives of many along the way. In fact, Barrett could not think of anything she would want to be doing with her life besides running the business and being a mother to her five-year-old daughter.

Joy would agree that the cafe has changed her and helped her give back to the community, all the while giving her opportunities to meet new people of different backgrounds, one cat at a time.

“Going into the shop, there were a lot of things that I didn’t anticipate,” Joy says. “I’ve met almost every kind of person there, and it’s really awesome to see that cats can bring them all together.”

King says her experiences at the cafe, as well as the two cats from there that she adopted and took home with her, have left a personal imprint on her.

“Before [going here], I would have considered myself more of a dog person, but now I’m definitely a cat person,” King says. “It has opened my eyes to cats; I just love them now.”