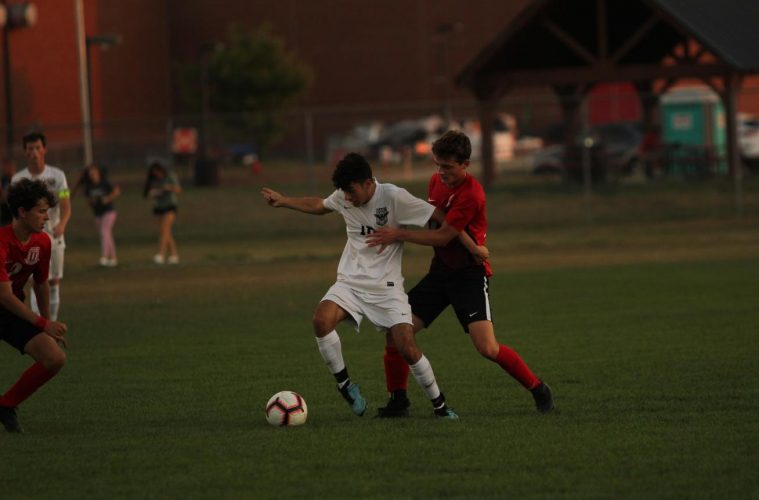 Senior Eyad Qaqish dribbles the ball in a 1-0 victory against West.

The historic 2019 season for the East Boys’ Soccer program came to a disappointing end in the Division I state semifinal on Nov. 7 at the mercy of Olentangy Liberty (19-2-1). All Liberty needed was one goal in order to bring East’s storied tournament run to a close. Olentangy, who improved to 19-2-1 on the season, advances to the State Championship game to face off against Cleveland St. Ignatius at MAPFRE Stadium in Columbus on Nov. 10.

The Hawks were forced to play from behind the entire game, as Liberty snuck a ball past junior goalie Nic Lemen just 48 seconds into the contest. That goal ended up being the deciding factor in the game, as the remaining 59 minutes of the match became a clash between two stellar defenses.

The experienced Liberty squad, who played in the same state semifinal game just last season, was able to take advantage of a pressured East squad, who was making their first Final Four appearance since 1999. Although Liberty was the younger team, with only five seniors, their past tournament experience gave them a clear advantage over the Hawks.

East head coach Jeremy Hilen, who was on the same East team that reached the Final Four in 1999, emphasized how this advantage impacted the outcome of the game.

“[Olentangy] knows what this stage is like, and they know mentally how to prepare for it,” Hilen says. “That helped them in this game and I’m sure it will help them in the next round as well.”

Although East fell behind early, they had many chances throughout the game to tie up the score, but couldn’t seem to get the ball past the disciplined Olentangy defense, a defense which  had given up just one goal in postseason play.

The East offense came very close to scoring on a few different corner kicks, but failed to sneak one through the net and past Olentangy goalie Nate Logozzo. Hilen knows that the first minute of the game was ultimately what put their season to an end.

“I wish we could get that first minute back. We never gave up,” Hilen says. “We found ourselves in a hole a couple times this postseason. I thought we would give a good fight and we did. It was just unfortunate we couldn’t get that equalizer.”

Following the game, many East players became emotional, knowing it was the end of their season. But even despite the tough loss, reality began to set in, and players and coaches realized that not even a heartbreaking loss such as this could take away from their historical record-breaking season.

The team was lead by 14 seniors, who paved the way for this team’s success and made a huge impact throughout the season. East junior defender Jack Plennert, who exited the game with an apparent ankle injury in the early part of the second half, emphasized the importance of the seniors to their team and thanked them for each of their contributions.

“Our seniors made a huge impact, and our teamwork on and off the field benefitted us a ton,” Plennert says. “We really connected and were [like] brothers this season. I’m proud to have played on this team with such a special group of guys.”

Plennert says that no other game compares to the magnitude of playing in a state semifinal game.

“It was incredible. It was probably the best experience in soccer that I’ve ever had in my life,” Plennert says. “There’s nothing better than playing in a game like this knowing that your community is behind you. The fans were amazing and the atmosphere was unbelievable.”

East senior midfielder Brady Shapiro nearly tied the game late in the second half with a header shot that almost snuck past the Olentangy goalie. Shapiro, who assisted the game-tying goal in East’s upset win versus Moeller, mentioned how proud he was to be a part of such a historic team and season.

“It means everything. This is what the team worked for the entire season, and what us seniors have been working for the past four years,” Shapiro says. “It sucks that it had to end like this, but it’s something that we’re going to remember for the rest of our lives, especially knowing that this is the best season East has had since 1999, the best record we’ve ever had in school history, beating Moeller for the first time ever. It’s safe to say that we accomplished a lot this season.”

Knowing that this would be his last game in a Thunderhawk uniform, Shapiro reflected that he will take his high school soccer experiences with him even after graduation.

As heartbreaking as this loss may have been, it took absolutely nothing away from what many would consider the best season in the history of the East Soccer program. The team recorded the best record in East school history after finishing 16-4-3. They posted nine shutouts, and even after a rough start to the season, they went on a 12 game winning streak setting the team up for postseason success. Finally, the team recorded consecutive postseason upsets of two #1 seeds (Beavercreek and Moeller) en route to the program’s second appearance in the Final Four.

“Overall, I am very proud of the way they fought to get here. They did what only a couple teams have done in East history,” Hilen says. “They were very resilient, they never gave up on the idea of who we were [as a team] and how good we could be. It was a special season for them.”